This is Simplicity 2054, which I've made twice before.  (post here)  A super simple knit shift.  I wanted to make up a few of these for spring, and decided to start with the fabric I liked least - you know, just in case.  But it turns out, I really like it! 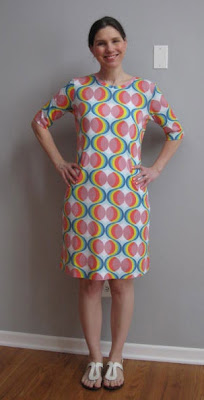 This is fabric from Girl Charlee, of course.  It's called "Pucci Swirls' - about as close as I'll ever get to anything Pucci!  I tried to link it up for you guys, but it looks like it's no longer available.  It's been several months since I bought it.

When I made the dress on Monday, I took special care to center the print and make sure it fell straight vertically.  I even made sure the design was centered on my binding. 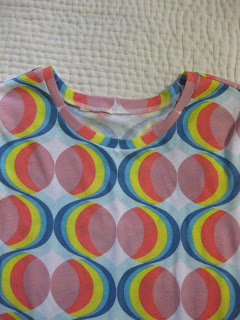 And I matched the horizontal lines at the sides as best I could: 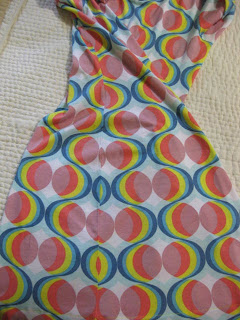 Here's my "come hither" look, trying to show you the side seam:

As you've probably noticed though, the print does not line up horizontally at the hemline.  I was going to blame that on the design being printed off-grain, but I think the truth is that despite all my apparent care, I did cut the dress on the fold.  I really should have cut it flat.  I guess I'd better keep that in mind for the next two, which are both going to be made from striped fabric.

But no matter - I still like it, and it's fine for me as an easy dress to knock around in.  The fabric is really soft, so it's very comfy.  I did a 2" hem with a zigzag; I like the extra weight the wider hem gives and will do that on my next two dresses as well, if the prints don't show through the fabric too much. 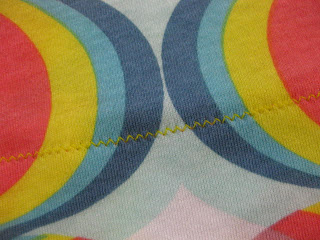 Have any of you tried this pattern?  What do you think of it?