Yesterday afternoon I sat down to do some sewing for a couple hours, but ended up getting so engrossed that I made a whole shirt!  I spent a total of about 7 hours on this, which includes about a half hour of set-up and clean up, and probably another half hour for going up and down the stairs to iron each seam.  So, about six hours from cutting out to finishing the hem. 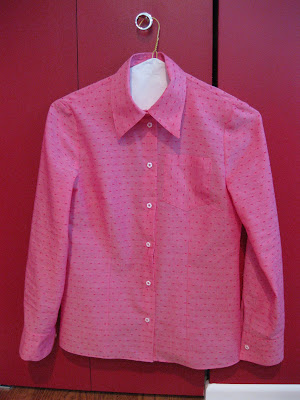 The pattern is the Burda Style Emily Shirt, available as a download for $3.50.   I downloaded this pattern in early February, right at the beginning of my shirt-making frenzy and just after Sunni made her fantastic Amazing Fit shirt.  At the time, I didn't have that pattern, but felt like I must have a women's shirt pattern immediately.  Of course, it took me another two and a half months to get around to making it, during which time I acquired the Amazing Fit pattern!

I printed and traced out this pattern a good month and a half ago.  The sizing was a little confusing to me:  the finished measurements are given on the front piece for the bust, and each size had a corresponding finished measurement of that size plus 3/4" - e.g. size 36 gave a finished measurement of 36.5".  I'm never really sure how much ease I want in a garment, so I decided to trace out the size 36 at the bust, which gives me 4 extra inches above my 32.5" bust measurement, grading out to a 38 at the hip.  I also did a 1/4" broad back adjustment extending down from each shoulder.

This pattern does have some shaping:  the side seams are curved, there are two fisheye darts on the back, and bust and vertical darts on the front.  I've tried to show some of this in these pictures, but I found this fabric quite hard to photograph! 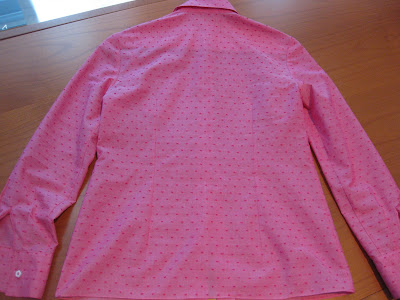 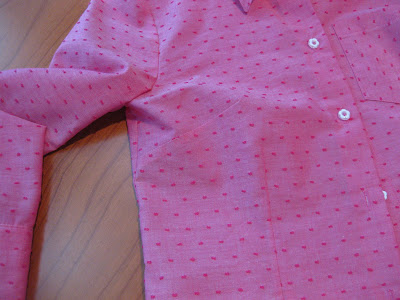 That said, the vertical darts as written are all quite narrow, so they don't really bring the shape in all that much.

There are also two sleeve variations - the normal one which I did, and a super-long sleeve with ruching at the elbow and an extended, flared cuff.  The placket for the sleeve opening is the more feminine kind (I don't know its name!) rather than a triangle-topped placket like you'd find on a men's shirt.  The bottom (hem) edge is straight rather than curved. 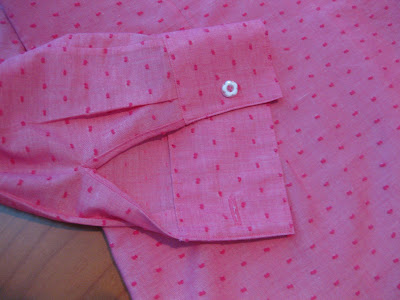 Other than the broad back and hip adjustments, the only other change I made was to add a breast pocket.  I used the pocket pattern from Hubby's shirt, but trimmed 1/4" off all sides to scale it down. 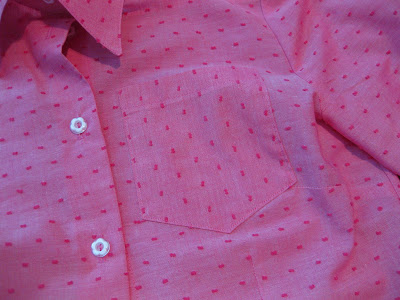 Construction-wise, I did things a little differently than I normally do.  I finished the shoulder and armhole seams with the serger, but did the side and sleeve seams as French seams.  Because of the extra 1/4" of width on the back from my adjustment, I had to ease the shoulder seam, so I felt I needed a more flexible finish.  However, this cotton/poly Swiss Dot chambray from Michael Levine frays like crazy, so I wanted the stability of French seams wherever I could use them. 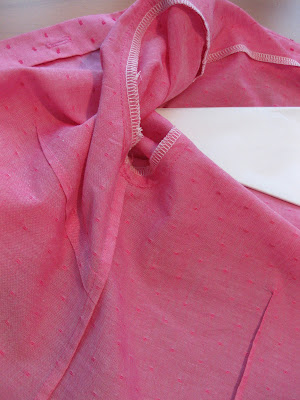 Last week I ordered three types of fusible interfacings from Fashion Sewing Supply to try out different things for Hubby's shirts.  So I tried one of them in my collar and stand here.  I used the Pro-Sheer Elegance Medium.  It feels very soft and drapey on its own, but ended up giving me a slightly stiffer collar than I wanted.  It's really a process figuring out which interfacing to use! 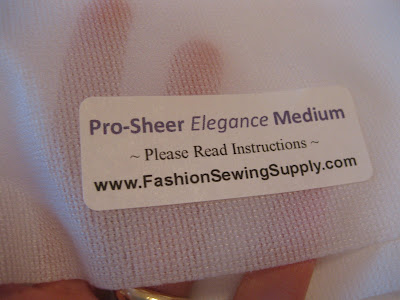 I also tried a trick I picked up from Susan via Pinterest - using a piece of bias fabric to ease a sleeve head.  It worked pretty well, and as I really hate gathering anything, I'll likely be doing eased sleeve heads this way from now on. 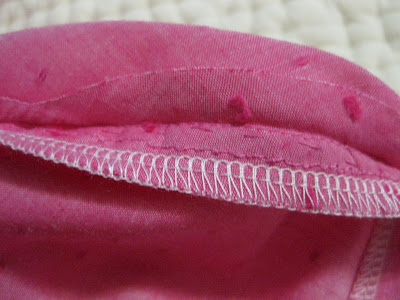 So, how does it fit?  Well, it looks OK on me, and anyone other than me probably wouldn't notice the little issues this pattern has that will keep it from being a go-to for me.  The fit is just off in too many ways that make this shirt not very comfortable to wear.  Despite my broad back adjustment, it still feels as if it's pulling tighter than I like across my back, and quite a bit across my upper arms when I move them.  And yet it looks a little baggy!  There may be a tiny bit of swayback action going on there too, although I think it's really just too long for me as well as a bit snug in the hip.  You can see below the pulling just under my arm at my latissimus dorsi, which have grown from all the rowing. 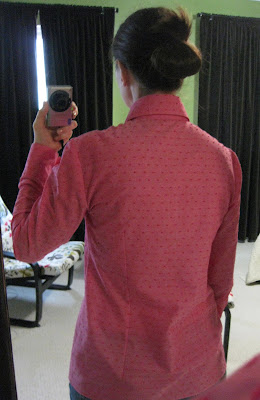 The shoulders are too wide, and would have been even without that extra quarter inch.  The sleeve head hangs off my shoulder point: 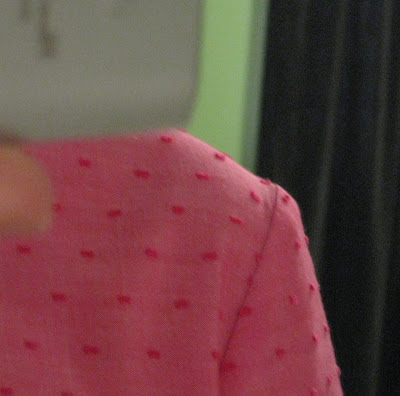 Up front things are a little better, but the fit is somehow both too baggy and too tight at the same time!  Too tight at the bust and too loose everywhere else.  I probably should have actually measured the pattern pieces to see if the finished measurement is accurate.  And as I said, the collar is too stiff, so it doesn't drape in the way I wanted it to.  But I also feel the collar stand on this pattern is too tall for a woman - my neck is longish and it felt too high for me. 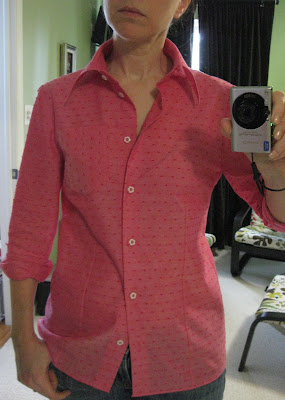 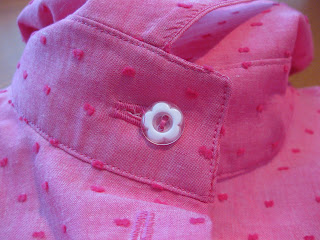 The sleeves are too long, which I was expecting because my arms are a little short and I didn't adjust the pattern.  I plan to wear them rolled (if I wear this shirt at all) so I didn't bother.  I also think the cuff is too wide to be fashionable.

So, although I had high hopes for this pattern, it just has too many problems for me to make it again.  Next time I make a shirt for myself, I'll try that Amazing Fit pattern.  I'm honestly not sure I will wear this shirt much - not only is it uncomfortable, but it really doesn't go with all that many things in my closet.  I just bought this fabric because I'm a sucker for Swiss dot and pink.  Combine the two and I'm pulling out my wallet!

I admit I'm a tiny bit sad about it, because it looks so good on the hanger and, if I do say so myself, I did a very good job with the construction.

Ah well.  It really is all about learning and practicing.