Yesterday I spent the afternoon finishing up my Ghia sweater.  I got the whole thing sewn together, the neck and button bands knitted and the buttons attached, by which time I was too tired to give it a final steam block.  So I left that for this morning.

And wouldn't you know:  when I spread it out on my ironing board, I found an error I'd made in the lace on the first front I knit!  Pretty early on too.  Can you spot it? 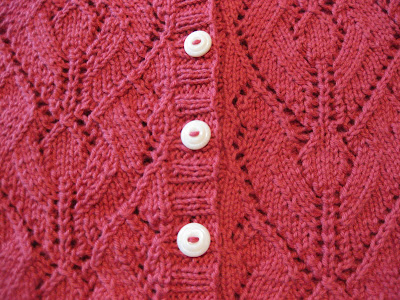 I completely missed out two rows of the pattern - rows which close off the top of the smaller diamond.  I did notice when blocking the pieces that the second front was longer than the first one, but I attributed it to my tension loosening up, as it often does when I'm trying to hurry to finish up a piece.  I didn't think much of it, and just steamed the heck out of the smaller piece until it matched the other! 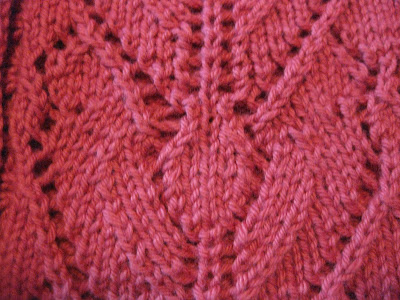 Now, this is one of those things that nobody will really notice - obviously, since it took me this long to figure it out!  So it only took me a millisecond to decide not to undo the whole thing, but rather to jerry-rig a solution.  Here's what I did:  with a new strand of yarn, I made a duplicate stitch right where there should have been a K3tog, going through the first and third stitches.  Pull tight and the stitches come together!

Here's a picture of the piece after I've closed the diamond on the left but not the one on the right: 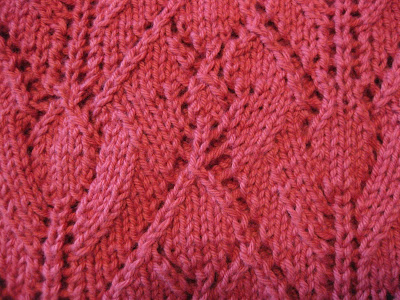 As Hubby would say:  good enough for government work!  It does help that this part falls under my bust, where there is a scant amount of shadow.

Here's how the sweater looks front and back after my fix: 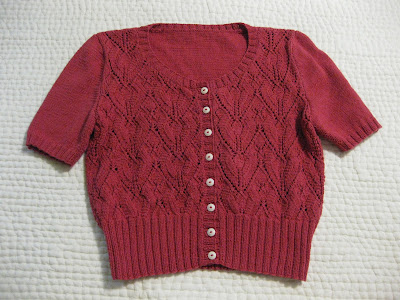 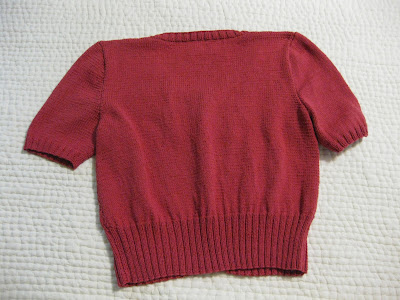 I'm really happy with the fit - the arms turned out just the way I wanted them to.  I'd hoped to put it on and take some pictures, but it's another dreary, rainy day here in Chicago, so these will have to suffice for now.

I wanted to use these cute little buttons I've had in my stash for years, so I went off-road with the buttonholes.  I lucked out and got great spacing on my ribbing, because I picked up two stitches for every three rows rather than going with the pattern's instructions.  This gave me 95 ribbing stitches instead of 120 - I had noticed that a lot of the FOs on Ravelry, and even the original example in the magazine, seemed to have button bands that flared out, signifying too many stitches.  Given that I'm a loose knitter to begin with, I knew I'd have to go my own way.  And because I did, I was able to make buttonholes every third knit ridge in my ribbing - my favorite way to figure out the spacing:  no math! 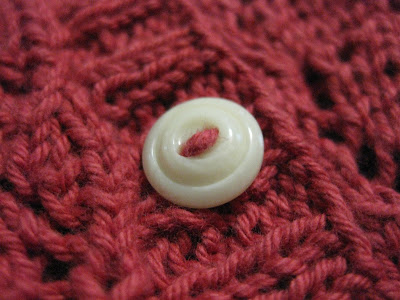 In the end, I only used 5 of the 6 balls of 4 Ply Cotton the pattern called for.  That shows you how much excess fabric I eliminated from those sleeves!

And now, I'm moving on to something Yellow.
Posted by Gail at 1:00 PM