If you're sick of reading my yammerings about interfacing, click away now . . .

You may remember that the lovely shirt I made for Hubby had some interfacing problems, i.e. the fusible kept coming un-fused. 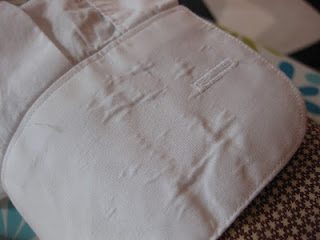 I tried to re-fuse it, but sadly, every time I washed the shirt, it would un-fuse again.  It took me a good 15 minutes to iron this shirt - three times what it normally takes - just to get it looking somewhat presentable.  And with each wash the situation got worse.  It was time to make a new collar.

While I was at it, I changed the shape of the collar.  After Hubby wore the shirt, he told me he felt the collar points were too long, and I had to agree with him.  I hadn't really noticed it at first, but after he mentioned it, I compared the pattern piece to his RTW shirts, and the collar really was quite exaggerated.


Neither of us are up on men's fashion so we're not sure what the current look is, although he did spot a similar shirt collar the other day at Armani.  Still, he needs to feel comfortable in his shirt, so I reduced the size quite a bit.  This one matches the RTW shirts he's been used to.


I think I mentioned the other day that I ordered a few different interfacings from Fashion Sewing Supply.  In my pink shirt, I used Pro-Sheer Elegance Medium, and felt it was a little stiffer than I wanted for my own collar.  So yesterday I made 4 collar pieces:  two in each fabric (the white of the old shirt and the yellow of the new shirt I'm making), one with Pro-Sheer Medium and one with ProWoven Shirt-Crisp.  Then I held all the pieces of each collar (upper, under and stay slot) together to see how they felt.

Fashion Sewing Supply lists Shirt-Crisp as a crisp but not super-stiff collar interfacing.  I found it to be lighter in weight than the interfacing from my local fabric shop which I used on the first shirt.  It did apply somewhat easier than my previous interfacing, but I still had to go over each area several times to get it to fuse.  The directions say that some fabrics will fuse more easily without steam; I tried it both ways on the same collar, so I'm not really sure which one did the trick!  I think I've got a stable collar now, but only a run through the washer and dryer will tell me for sure. 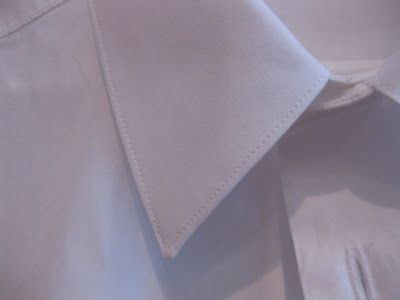 I had a lengthy discussion with a lady at the fabric store last week who told me that fusible interfacings are not meant to be washed and dried, and that men's shirts should ONLY be made with sew-in interfacing.  I'm not really sure I agree with her, but time will tell.  I'm contemplating taking apart one of Hubby's RTW shirts to see how it's done.  I hesitate to use sew-in interfacing because I don't want the bulk in the seam allowances and can't figure out how to do it with the seam allowances trimmed!  Basting, I guess.  Sigh.  Any ideas from you shirt-makers out there?

Meanwhile, here's the collar for the new shirt, to give you an idea of the stiffness: 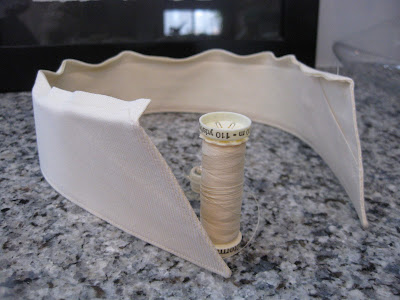