As I said the other day, I was pleasantly surprised when I went back over the year to discover that I really liked most of what I made.  That made distilling it down to 5 favorites a little difficult.  But it makes coming up with 5 failures pretty easy!

Honestly, I can only think of two garments I made this year that I would qualify as true failures.  But not to worry - I failed in many other ways!  I came up with four categories - the total number of projects is more than five, but it's all about reflection and sharing, right?

I should probably qualify this a little further.  One of these is really a failure; the other just doesn't fit me well and I'm not crazy about the fabric I used.

The true failure is the green interlock maxi dress I made: 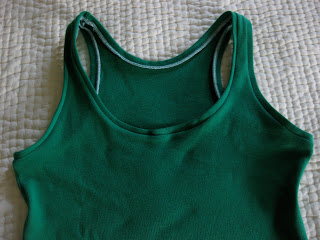 Shoddy workmanship, the wrong fabric - it's just a mess.

The other thing I made that I really didn't like was the Lisette Market Blouse: 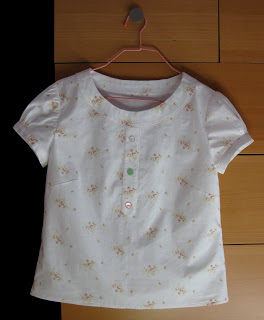 Again, poor workmanship - I really ran this one up as a test of the pattern, and the fit was . . . strange.  But in the end, I decided I wasn't crazy about it, style-wise.  So I never bothered to go back and make adjustments.   Don't get me wrong - I think it's a cute design.  I just think it's a little too "young" for me.

But here's the interesting thing:  I wore both of these garments quite  a bit over the summer!  I wore the top all the time for doing housework and gardening, because I didn't care if it got ruined!  And I wore the dress as an in-between, after taking off my sweaty workout clothes, but before putting on my PJs!  This is something I've known for a long time:  the things I love rarely get worn, because I'm afraid of ruining them.  Must work on this.


2.  The Road to Hell is Paved with Good Intentions

I learned a lot this year (mostly about sewing, but I did learn a few new knitting tricks too).  But I could have learned so much more.

I built up quite a nice library of sewing books over the year.  I haven't counted, but I'd say I've probably got about ten books on various sewing-related topics.  I've started reading all of them, but I've only read two of them from start to finish.

And then there's Craftsy.  So enticing.  I did count the number of Craftsy courses I've signed up for - a few free, but mostly paid:  fifteen courses!  I have completed three.  I really don't know what it is that makes me choose junk on Netflix over these worthwhile learning opportunities.

Ah, yes.  The UFOs.  In my case, they never even got started!  Here's my pile of stuff to make the Victory Patterns Anouk Dress: 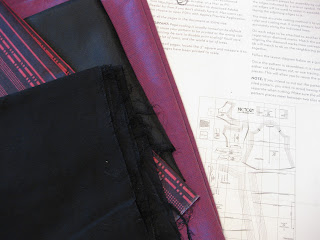 I was SO excited about this pattern when I bought it, and I bought the fabric soon after - around the beginning of February.  I was convinced that it was going to be my Best Spring Dress.  And then . . . what happened?  I kept thinking about making it, but never actually did it!  Have I ever mentioned that I'm easily distracted?

And then there's the Colette Patterns Peony . . . that was a UFO from 2011!  I made 2 bodice muslins and then put it on the back burner.  The good news on that is that I know a lot more about pattern adjustments, and could probably make it work for me now.

Here's another area where I often fail:  I get completely taken in by the styling in magazines or on patterns.  Even when all evidence is to the contrary, I convince myself that yes, I'm going to look Just Like The Model!  I talked about this a little with my Inverted Pleat Skirt.  But it happened to me twice this year with knits too.  First with my Ava sweater, and then with my Antibes sweater.  In both cases, I was a victim of the uber-cute vintage-looking styling in Rowan 51.  Neither of these sweaters is really "my style" - the Ava is a little too plain, and the Antibes is a Polo Shirt.  I don't really like polo shirts! 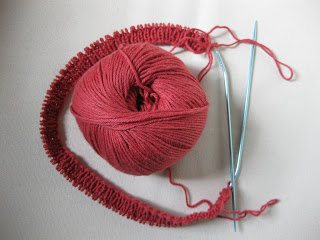 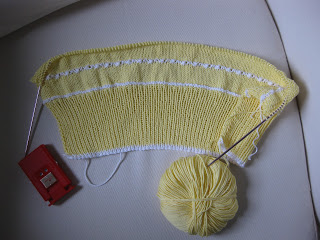 I do, however, like both these yarns.  So both of these projects have been frogged, and the yarn is waiting for something better to come along.

So, in conclusion, I'd say a pretty good year.  And there's definitely room for improvement.