I've really been enjoying reading everyone's posts on their hits, misses and lessons learned in 2012.  And true to form, I've been putting off writing my own, because I have too many ideas floating around in my head!  It does seem that the other participants in Gillian's blog-along have taken a philosophical approach to this "assignment," so I thought I'd take a different tack just to mix it up a bit, and share some of the very concrete lessons I learned this year.

These mostly have to do with sewing, because after 40 years of knitting, I honestly don't "think" a lot about my knitting any more - I just do it.  Things that would have taken some problem-solving 20 years ago have become part of my consciousness.  That's not to say I have nothing left to learn about knitting - I certainly do!  But when I think of the tricks I've learned lately, most of them occurred before 2012.  And most of them are to be found in the works of Elizabeth Zimmermann.

However, I did finally crack a nut that's been bothering me for years:

1.  Short Rows.  I've always done the "wrap and turn" and my short rows have always looked sloppy.  I didn't really know there was any other way to do them, so when I saw Carol Feller's Craftsy class on the subject, I signed up.  I wasn't expecting to hit pay dirt, but I sure did!  I used her techniques for the collar of my Exeter cardigan, and they were the best short rows I've ever done.   I really recommend this class if you're not happy with your short rows - it's free!

OK, the rest are about sewing - I had a lot to learn here!

2.  Darts.  I mentioned this a few weeks ago when I made my sparkly skirt.  Christine Hayne's method for pinning and sewing darts neatly has truly been a game-changer for me.  I used to dread darts and fuss with them endlessly, but with this simple technique they've become one of my favorite bits of sewing!

3.  Points and Curves.   Almost a year ago, I posted a couple of new techniques I learned while making my Pussy Bow blouse.   One was a tip from Pattern Runway for making good points on a collar:  sew to one stitch away from the point, then pivot and sew one stitch diagonally to the next seam, then continue.   It really does make for a neater corner, and now I try to use it on all corners, not just on collar points.

The other tip was from Colette Patterns:  shorten the stitch length to make sewing curves easier!  Now why didn't I think of that?  No matter how slowly I sewed, I still had trouble rounding a curve - until I tried this simple trick.  Genius! 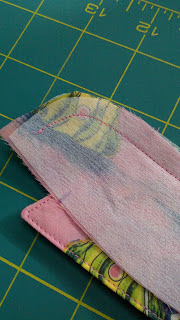 4.  Smaller (bust) darts for smaller cup sizes, and vice versa.  It really took me a long time to wrap my head around this.  I literally had to fold a piece of paper into imaginary darts to send the point home!  In my experiments with fitting, I kept trying to take bigger darts to get a better fit in the bust, and not achieving anything but a worse fit!  I don't remember where I read or heard this first, but I do remember saying, "Huh?!  That can't be right!"  But you know what?  It is right.

5.  Fabric choice affects fit.  I first became aware of this with the coral silk Sorbetto top I made.  I had made this pattern about a gazillion times before and they always fit fine, but this one was very constricting across the upper back.  (BTW, this is also when I really realized I need to be doing broad back adjustments on things like this.)  What I realized is that all the other times I'd made this pattern, I'd used plain weave fabrics, which have a little give.  This one was made in silk twill - no give whatsoever, and hence the tighter fit.  You really can't tell from the front, but it makes the top slightly uncomfortable to wear. 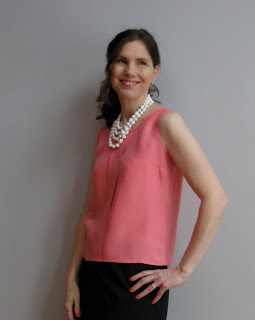 I realized this again with my Mission Maxi dresses.  I did two test runs in cotton interlock (because I didn't know what the heck I was doing) and then three "real" dresses in jersey.  I thought jersey was jersey, but that's not necessarily the case.  The one I made in rayon/cotton blend fits far looser than the two 100% cotton dresses, and one of those is tighter than the others!


I still have a little trouble with this, probably because I don't really pay attention to the "amount of stretch" listed on a given fabric.  I'm working on it though!

I learned so much this year - I really feel my sewing improved by leaps and bounds.  This is partly due to some of the nifty new tools I bought myself (serger, sewing machine with fancy feet); partly due to increased experience from just doing; and partly due to all the extra knowledge I gained by following along with everyone else's knitting and sewing insights via their blogs.  So thanks to all of you for participating in our wonderful online community!