I did let out the Pencil Skirt.  I have to say, although it feels much more comfortable to wear now, I think it lacks its prior VaVaVoom.  Here's a "before and after" collage:


I ended up letting out the side seams by 1/2 inch each (1/4 inch front and back) - all the way to the serged edge.  I did this even though  I knew I'd have to take the right hip in again - I just wanted to see how much leeway I had.  I did end up taking in the right hip again by about 3/8", so almost back to where it had started.

As I was analyzing the fit, I discovered something interesting:  although the two front darts were the same length, the right one appeared to be significantly shorter, because my pelvis is quite tilted, with the right side being higher.  I ended up lengthening that dart by a half inch to make it appear to be the same length as the one on the left.

I think I can call this skirt wearable now, even though the fit isn't perfect yet.  I'm still getting poufing at the bottom of the right hip dart, and I've still got some diagonal drag lines on the bum.  I need to look this up again to find out the fix for it!  But I think I've done all I can do to this skirt without compromising the fabric.  And my sanity.


I'm not done exploring this type of skirt on me; my plan is to do the next one using the pattern from Gertie's book, since lots of people have been raving about it.   In the meantime, I've been making things I'll actually wear in my daily life.  Fancy that!

Oh!  And I wore my one and only pair of vintage clip-on earrings with this outfit!  I've had them a gazillion years (I bought them when I was in college!) and never had anything to wear them with.  Because you can't see them in the pictures above, here's a close up: 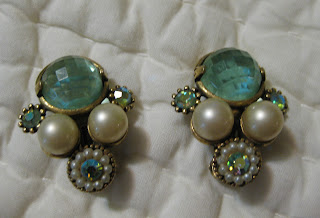