It feels like I've been doing nothing but work on my Exeter sweater for the last week, but in reality, I've had a houseguest, been on two dates with Hubby, and spent several hours finishing up my quilt.  As the weather cools, I'm definitely going into hibernation mode:  really all I want to do is knit!  And now I've got two quilts to cuddle up under while I do so. 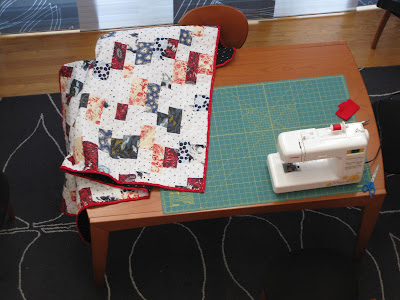 Honestly, once I was completely finished with this quilt last night, I felt a little underwhelmed.  You know that feeling - when it looked so much better in your head than it does in reality.  That's not to say I don't like it; I do.  Just not as much as I was expecting to.  But I learned a couple of good lessons along the way.

I made a few design decisions that I think made this one harder than the previous one.  Because I didn't want to interfere with the pattern of the dotted Swiss on the back, I decided to do the quilting in between the rows of dots from the back, to create a diamond pattern.  I knew I was taking a risk doing my quilting from the back, and the diagonals made it even more difficult because they created longer lines to quilt, and it meant that the quilting was done on the bias.  I've got a couple of areas that demonstrate very well the need to keep all your fabric taut as you quilt: 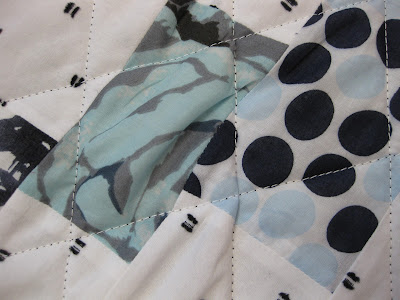 Obviously, I didn't pick out those rows.  I'm actually really OK with the imperfections on these first two quilts:  I like knowing that I've got room for growth.  And these wrinkles don't really show all that much now that the quilt has been washed.

When I was almost done with the quilting, my walking foot started to act up.  The bar that goes over the needle clamp was getting stuck in the up position, so the feet weren't moving the fabric forward.  This created very uneven thread tension; lines of quilting that previously looked like this: 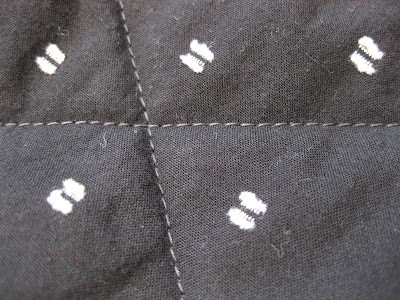 Started to look like this, the white thread I used on the front pulling to the back: 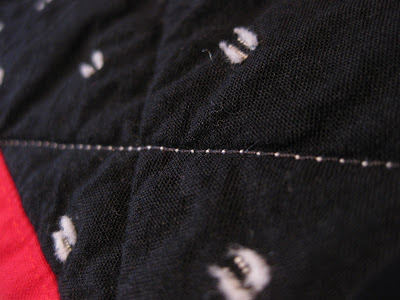 I took my foot off, rethreaded my needle and reset my bobbin a couple times, but these fixes only lasted a few inches, so I went ahead and finished the last few rows of quilting, convinced I'd broken the foot and would have to buy a new one.  After I finished, I got the bright idea to google "troubleshooting walking foot problems" and discovered that a drop of oil might fix it.  I inspected my foot to see where the moving parts were, then added said drop of oil.  And hey, presto!  It worked!  I was able to add on the binding with no further problems! 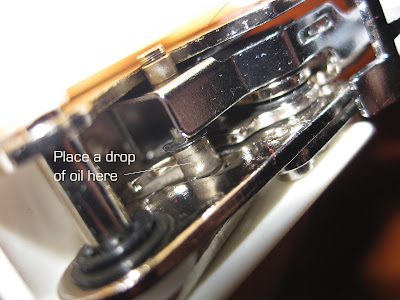 The oil goes on this little piston which is attached to the long bar that goes over the needle clamp.  It sits in a little kidney-bean shaped opening:


The other thing I learned is that I've got a long way to go in terms of applying binding.  There are a lot of places where my stitching shows at the edges, partly a function of choosing a highly contrasting color for the binding.  But I didn't have the heart to take any close-up pictures of those boo-boos.  Also, it's a very cloudy day here. 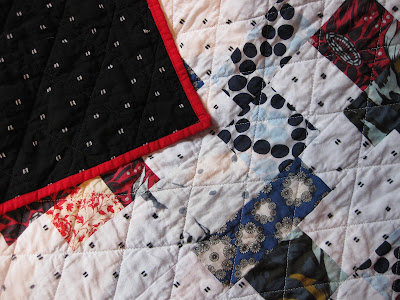 I'm pretty happy with how the quilting looks and how all the fabrics work together.  I wish I'd done a little more planned placement of fabrics rather than making everything completely random.  But overall I think it's a pretty good use of scraps.  As I was making it, it seemed so much bigger than the first one, but in the end it's exactly the same width, and only about 3 inches longer. 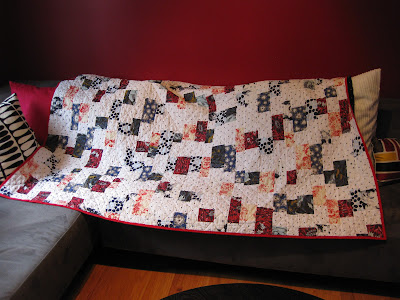 The color and style go pretty well with my living room, so I think it will live down there. 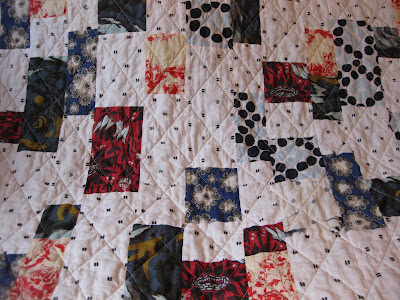 It didn't use nearly as much fabric as I'd thought it would, so I still have pieces of most of these fabrics left!  It might be time to make some little zippered pouches, or some more box bags . . .