It's done.  I can stop complaining now!  (Well, about this anyway!) 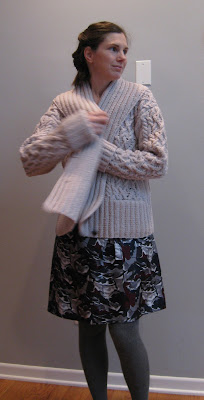 It felt like I was working on this sweater and this sweater alone all fall.  Especially in the last couple of weeks, I really made a push to get it done and didn't work on any other knitting.  So I was surprised when I looked back at my projects page on Ravelry and discovered that it "only" took two  months and two days.  Not only that, but during that time I also made:

three pairs of mitts
a double cowl
a hat
a turban
AND
finished my lace stole and socks that had been started before I began this sweater.

I think part of the reason it felt like it took so long was that I really didn't enjoy working with this yarn.  It feels dry and crinkly, and doesn't have a whole lot of bounce.  However, I do like the fabric it produces.

The recommended ease for this pattern is 4 - 6", so I went with the first size, which gives me 4.5" inches of positive ease.  This is something I really like about the Brooklyn Tweed patterns I've used:  not only is the recommended ease given, but the pattern also specifies the size and amount of ease shown on the model, so you get some sort of frame of reference.  The fit is interesting, because although there's a lot of ease in the body, the sleeves are more fitted than you'd expect. 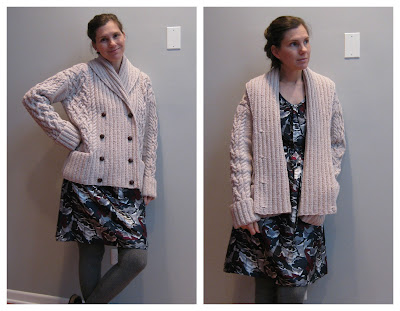 There are a couple of details on this sweater that I like a lot.  The one-row buttonholes look very neat, and the construction of the pockets is one I like but don't usually use. 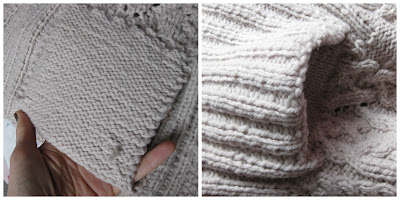 And there are a couple of things I'm not so crazy about.  The shawl collar, while very dramatic, is really too wide to be practical.  This makes it bunch up at the back, and even so, it feels like it goes half way up the back of my head! 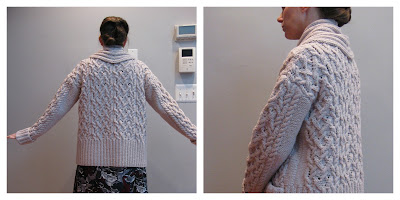 Also, while the pattern is very well written, I felt that it didn't explain well at all how to deal with the front neck decreases as they encroach on the cables - you're really kind of left to your own devices there.  I'm not 100% happy with how I did it, but I got stumped for a better solution!

It's one of those things that no one but me will notice, but I wanted to mention it as part of my "review" of the pattern.

One thing that helped me a lot was an app I downloaded onto the iPad called JKnitHDLite.  I've mentioned before that when I'm following a chart, I usually have a sticky note that I line up at the top edge of the row I'm working on, and move it every row.  Well, this app allows you to import PDF patterns and has a device that will highlight a row on your chart.  You can change the width of your highlighter, and a double tap above or below it will move it up or down one row!  It really made working from a chart much faster and easier to read.  The app I linked above is free, but I liked it so much I downloaded the "Pro" version, although I haven't had a chance to try it out yet.

Even though it wasn't a "fun" knit for me (I know I whined about it a lot!) I'm glad I made this sweater.  It's very cozy and blanket-like.  Are any of you tempted to try it out?
Posted by Gail at 1:25 PM