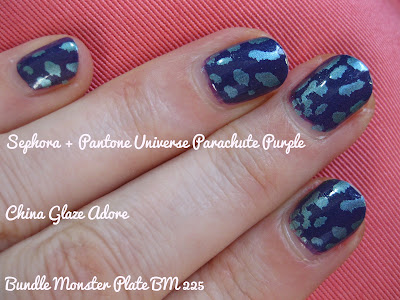 Shortly after they were released this summer, I got three of the Sephora + Pantone Universe Jewel Lacquers.  So far I've tried two of them, and so far I'm not too impressed.

Parachute Purple, shown above, is a deep blue-purple with blue shimmer.  It's an OK color, nothing earth-shaking.  My camera wanted to show more of the blue, but it actually leans more purple.  The shimmer is pretty subtle, although when you can see it, it's quite pretty.  My problem so far with these polishes is that the brush makes it very difficult to get a good application.  It's one of those flat, wide brushes that I always have trouble with, and the ends are just ever-so-slightly splayed to make it even more difficult.

The other thing I didn't like about this polish is that even after a healthy coat of Seche Vite (known for the high gloss finish it gives), the finish was a little dull.  On top of all that, I got tip wear after half a day, although I really didn't do much other than type a little and put away some dishes.  I didn't even wash them, just took them out of the dishwasher!

I put on Parachute Purple last night, but by this morning I was already bored, so I spiced it up with some stamping.   I'm not sure what this image is meant to be, but I think it's kind of cute!  Here's another picture (albeit a little creepy) that shows the shimmer and truer colors (as well as the tip wear): 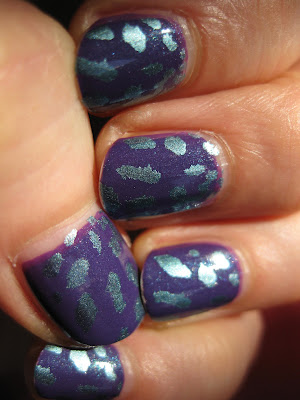 Have any of you nail mavens tried these polishes?  I keep searching for swatches and reviews online, but there's not much to be found.