Gosh, it's been well over a month since I finished my Allegheny dress, and I finally had a chance to wear it yesterday, although I ended up being too hot later in the afternoon.  But a lot happened in that time.

When I originally posted about the dress, I explained that I'd chosen to work a rib at the bottom rather than a folded hem, and that I'd chosen not to make the dress so short.  A couple weeks later, on the day I had a massive "photo shoot," I took pictures of this dress as well.  And I wasn't crazy about what I saw "on film."  The dress was just too long, and it looked frumpy: 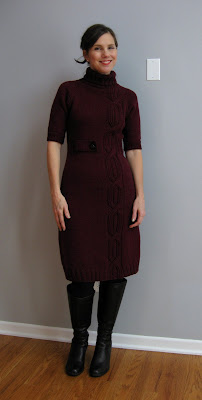 So I set it aside, and a couple weeks after that, I sat down and unraveled a good four inches from the bottom.  I had planned to work the rib again, but in order to have the cable land where I wanted it to, really the only good solution was the turned hem.

The instructions do include a couple of rounds of decreases on the hem section that is turned to the inside, to reduce flaring.  To further reduce it, I worked the hem in a needle one size smaller.  And to minimize the ridge you get when sewing in a hem, I didn't cast off, but rather sewed the live stitches to the inside, one by one. 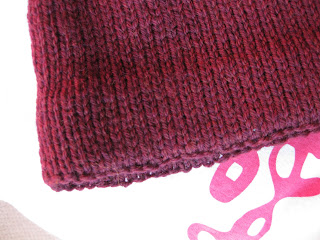 Yesterday we finally got some chilly but sunny fall weather, so we decided to go for a walk in beautiful Jackson Park,  just to the south of the Museum of Science and Industry.  And I wore my dress for the occasion.  Here are a few of the pictures Hubby took in the Osaka Garden: 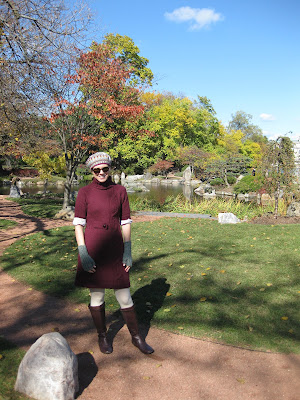 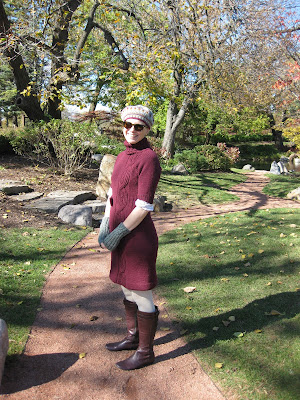 I think this above-the-knee length is more flattering, and I was mostly able to avoid the hem flare.  I wore a shirt under it yesterday because this wool is a little scratchy, but I actually prefer how it looks without a shirt.  And I normally wouldn't wear these off-white tights with it, but I wanted to make sure the new length was easy to see in photos!

One of these days it will be cool enough to wear it again.
Posted by Gail at 9:45 AM