Our friend M recently bought a new house.  I told her I was going to make her a housewarming gift, and I had something specific in mind (which I'll probably still make, so I don't want to let the cat out of the bag), but she immediately said, "I want an apron.  In orange.  Orange makes me happy."

OK then, an apron it is!

It took me a while to figure out what kind of apron I wanted to make.  I didn't want anything ruffled, and I wanted it to be a serviceable apron - i.e. cover her clothes while she's cooking.  I finally found this tutorial for a deli-style apron like the kind I always wear.   I ordered up some cotton sateen:  Swirl in Tangerine by Trenna Travis for Michael Miller, and the reverse for the pocket. 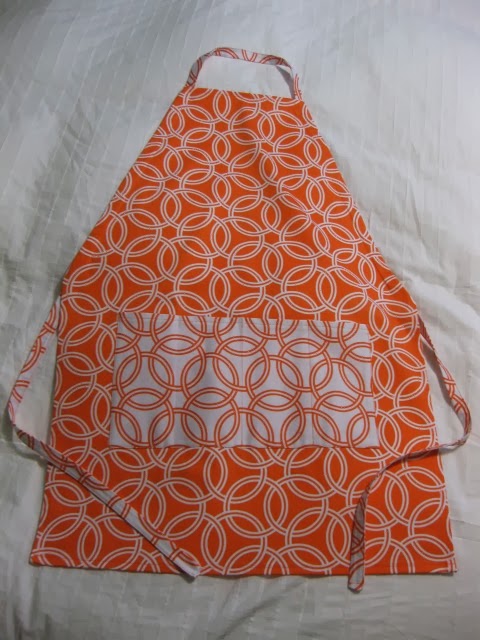 When I set about making the apron a couple days ago, I did things a bit differently from the tutorial.  Since I thought I might want to make this again, I traced out the pattern on tissue rather than directly onto the fabric.  And instead of using cotton webbing for the tie, I made my own tie using the contrasting fabric. 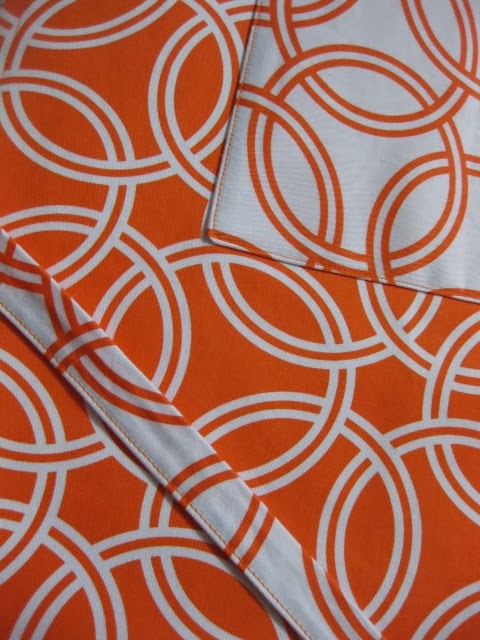 For the tie, I cut three pieces of fabric 2.125" wide by the length of fabric I had, which was about 39".  I trimmed the ends to 45-degree angles and sewed them into one long strip, then folded it in on itself and sewed it up with a 1/4" seam.  After turning it out to the right side, I poked the ends in and then edgestitched along the entire seamed edge.

There is a fair bit of edgestitching in this project, and my blind hem foot came in quite handy for that. You can't really see it, but the pocket is divided into three:  one larger pocket on the right side, and two smaller ones on the left.  M told me that she has to have a pocket to keep her phone in, since it's how she operates her buzzer!


The pattern calls for 1.25 yards of 54" fabric for the apron and .5 yards for the pocket.  I have enough fabric left over that I could make a second apron, so I think if you wanted to lay this out cross-wise instead of length-wise, you could get away with half the amount.

This kind of apron is long, and meant to be worn folded up at the waist, like this: 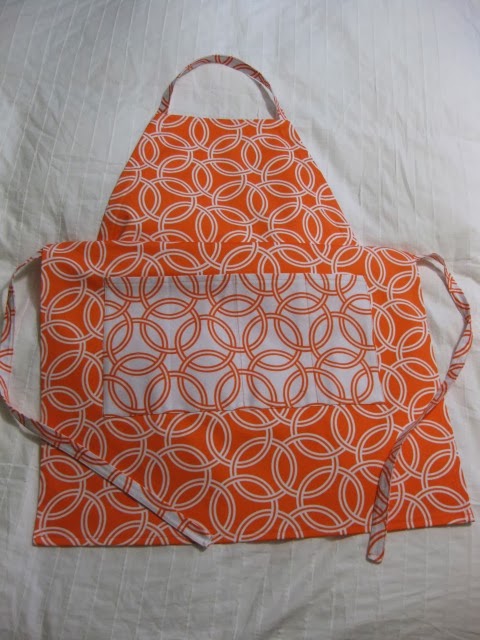 I think the only thing I'd change in the future is to make the tie longer - this one is 98".  I like to wrap my apron ties around the back and then tie a bow in the front.  This one does wrap to the front, but it's only long enough for a double knot, not a bow.

So that's my second sewing FO for 2014.  Sadly, it doesn't count toward my Stash Diet tally, since I'd purchased this fabric at the end of 2013 specifically to make this gift!
Posted by Gail at 5:00 AM