So Far Behind: Archer #2

Yeesh.  I think I finished this a couple weeks ago!  And then we had a lot of grey weather and it hung on my dresser like this: 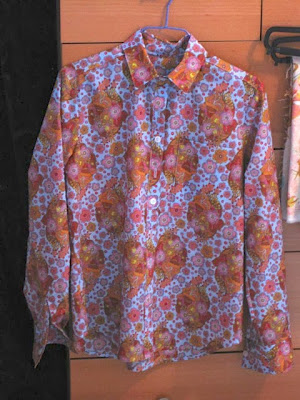 Until finally last weekend we had a nice day, and I wore it on a little outing with my honey.  We decided to go see the inside of the Newberry Library, since neither of us had ever been inside before.  Alas, we'd had a very late night the night before, so by the time we got there, the only thing open was the lobby and the bookshop.  And the exhibition hall, which we skipped because it was very generic looking, and because neither of us is particularly interested in the Civil War.

I had Hubby take some pictures in the garden in front of the library, and I think you can tell I wasn't feeling too well.  But at least I wore the shirt and remembered to get a picture of it to save you all from the Grey Wall!  You can just see the building in the upper left corner. 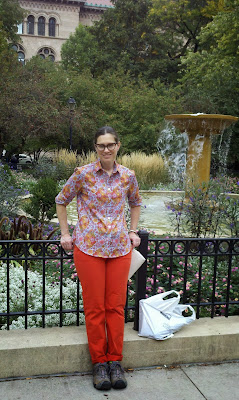 I like this shirt, even though the huge paisley motifs made the pattern placement a little iffy.  I didn't have any wiggle room really to do it differently, since I originally intended this fabric for a different project and therefore had barely enough yardage. 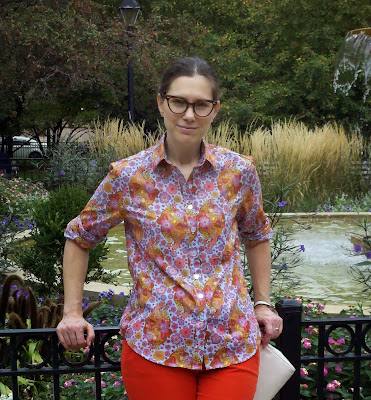 Wearing this shirt made me start to consider the possiblity that my right shoulder is positioned forward of my left one, in addition to being lower.  I haven't actually had time to do any pinning out yet, but I'm keeping this in mind for my next one.  Interestingly, I wore it again for a little while the following day and wore one of my super-padded bras, which seemed to solve the issue of too much fullness in the right shoulder.  Hmmmmm . . . .  so much to think about!!

Anyway, I like it despite its little flaws, and will enjoy wearing it.