On Tuesday, I made a dress! 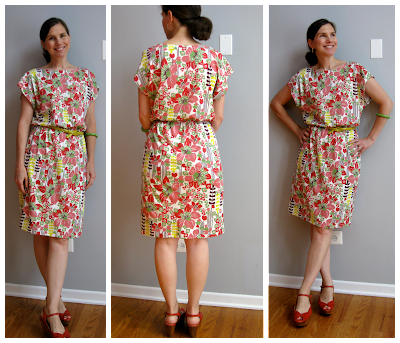 I bought this knit fabric from Girl Charlee just before Niecey-poo came to visit in mid-July, so this idea had been festering in my brain since then.  I fell in love with the print, and it's a modal-cotton blend, so it's also nice and soft.  Girl Charlee listed it as being a fabric designed by clothing manufacturer Blue Platypus, and you can see the dress they made from it here.  I changed the name (a little) to protect the innocent (me).

I wanted a similar dress, but I knew that if I made a dress with no elastic at the waist, I would constantly be tugging at it and rearranging how the belt held it.  After  lot of thought, I decided to use the Pattern Runway Kimono Dress pattern again.

Since I was using a knit rather than a woven fabric, I made some construction changes.  I did away with the back neck opening altogether.  I also decided that using facings at the neck and armholes would interfere with the drape of the fabric, so I eliminated those as well.

I made a strip of binding for the neck, 1" wide by the length of the neck opening.  I serged one side of the binding, then sewed the other side to the neck.  Then I folded it to the inside and topstitched it down 1/4" from the edge.

For the armhole openings, I felt that using a strip of binding would keep the sleeves from draping the way I wanted them to, so I just serged the edges and folded them to the inside, then topstitched them down.  I'm not 100% satisfied with the way this looks on the inside, but I haven't yet thought of a better way to do it.  All the topstitching was done with a straight stitch at the longest length for my machine (4), while slightly stretching the fabric.


I did the hem in much the same way, but folded the fabric twice to the inside, a little more than an inch. 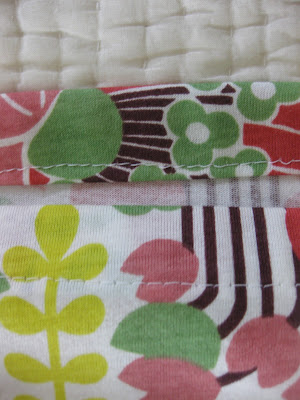 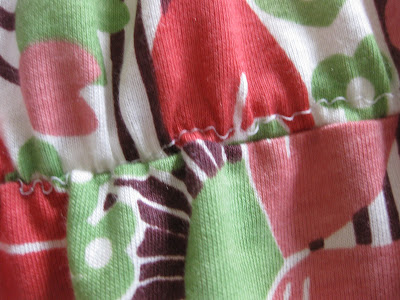 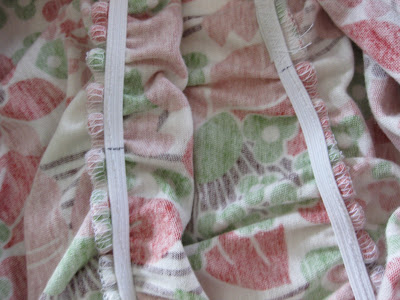 Luckily, the bodice blouses over the waistband, so you can't see my wavy stitching.

I'm mostly happy with this dress, and have plans to make at least one more.  I wore it all day yesterday and was pretty comfortable - until I ate banh mi and the elastic started to feel tight around my waist!
Posted by Gail at 7:00 AM