Wow, everybody!  Thank you so much for all the lovely compliments on my dress!  I'm hoping I get to wear it sooner rather than later.  I was encouraged when a friend said yesterday it is supposed to be cold on Sunday.  But then I looked at the forecast, and it is only supposed to get down to 60 degrees (Fahrenheit, of course!) - cool, but not cold enough for a full-on wool dress!

Here's another project I've got going on the sidelines.  (I want to get my big project a little further along before I take any pictures - at the moment it only consists of ribbing.  Not too exciting!)  I bought this ball of sock yarn back in early August when Alicia and I got together and went yarn shopping in our coordinating outfits.  This is one of those self-striping yarns, in colors that don't really go with anything.  But I was strangely drawn to it - I kept coming back to it in the store, and finally decided it had to come home with me.  A couple weeks later I cast on and made the first sock: 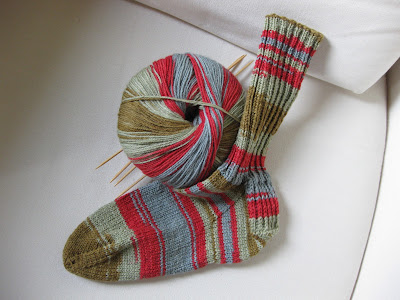 Here's the unusual reaction:  I don't really want to make the second sock!  Not because of Second Sock Syndrome (I've never suffered from that, thankfully), but because seeing it like this in my knitting basket makes me feel so happy!  I just really love these colors together, and I think it's fun to see the sock and the ball of yarn next to each other.  Once I finish the second sock, they'll be put away in my sock drawer and I won't see them nearly as often, although I suspect they're going to become a favorite pair.  So I think this will remain In Progress for a while.

Have any of you ever felt this way about something you were working on?  I feel this way a lot about books I read, but this is the first time I can remember feeling this way about my knitting!  I'm usually very driven to finish!
Posted by Gail at 2:49 PM