A few months ago I bought a one-year subscription to Burda sewing magazine.  Back in my earlier sewing frenzy of the late '90s, I subscribed for a couple years, and a lot of the things I made came from those magazines.  When we moved, I thought I probably wouldn't take up sewing again, so I got rid of all those magazines and the patterns I'd made from them.  Doh!  Lesson learned!

So one of my goals this year was to make something from one of the magazines.  I'll admit that it's a little hard to get myself to remove the pattern sheets, iron them, find the correct pattern pieces, trace them and then add the seam allowances, so I've been procrastinating about doing it.  But I had one yard of that medallion-print jersey left, and I really wanted to make a little top out of it.  So I chose this one, model 110B from the May 2012 issue: 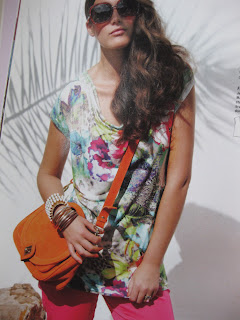 Only mine doesn't look that good. 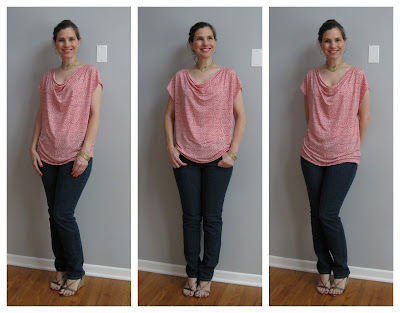 One of the things I really like about Burda magazine is the little line  drawings that accompany each pattern.  I find these are pretty accurate in describing the shape and details of the pattern. 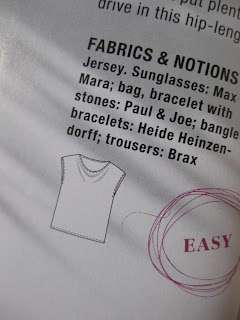 See how boxy it is?  I totally got suckered by the styling on the model.  I'm pretty sure they pinned it closer to her body in the back.

I made a size 36 (European), which is the size that corresponds with my measurements.  For this draped-neck top in jersey, the instructions say to cut the pieces on the bias, but I didn't have enough fabric to do that, and my fabric had a lot of drape anyway, so it wasn't necessary.  After I finished it, I found it was very low-cut - much lower than I'm comfortable with.  So I re-seamed the shoulders at 5/8", thus taking 1.25 inches off in total. 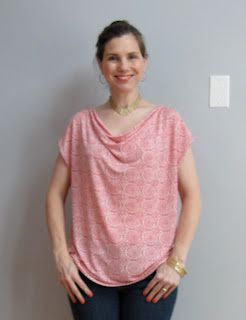 I'm still debating whether I should take in the sides too.  I had a hard time getting what I consider to be a good picture of this.  I think when I'm wearing it, it drapes around my body in a nice way and doesn't look quite so boxy as it does when I stand still and pose for a picture.  And in my real life, I'm not often standing still!  I think I need to take some of the length off too.

Another thing I like about Burda magazine patterns is that there are often a couple variations which use the same pattern pieces.  This pattern was also shown in a woven fabric with the drape folded and tacked at the neckline.  Unfortunately the model wearing it is standing sideways, so you really can't see it!  But there's another, completely different variation which uses the exact same (two) pattern pieces: 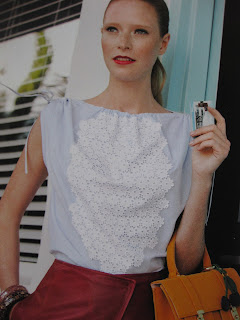 Here's the little drawing for that one: 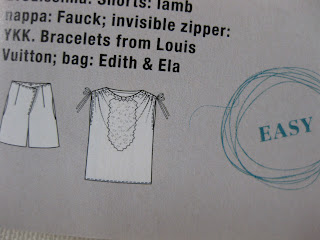 I think that's pretty cute!  You can see the pattern more closely, and even download it as a PDF if you like, right here.

Looking through the Burda magazines helps me understand garment construction and how different looks can be achieved using the same pieces.  So even if I don't make many projects from them, I think it's still money well-spent.

Do any of you sew from Burda magazines?