My BFF loves zebras, and she's told me more than once about how their stripes keep them safe(r) from lions and the like:  when they run as a herd, the stripes create such visual confusion that the predators can't really pick any one animal to attack. 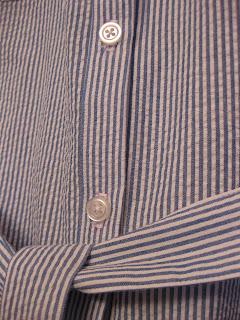 This is the Lisette Traveler Dress, view A.  I worked on this little by little over the last week, but did the majority of the sewing over the weekend.  And friends, it was not easy.  But only because of this cotton/poly seersucker I used.  My eyes just couldn't stay focused with all those stripes!

But the pattern itself was great!  This one has been on my list for quite a while, and I bought the fabric over two months ago.  I really love shirtdresses, but if you're curvy like me, you know that the RTW ones are not always suited to our shapes.  I was really excited to be able to make my own shirtdress, in a size that fit me.  I cut a size 10 on top, grading to a 12 in the hips.  In reality, I'm more like a 14 in the hips in Simplicity patterns, but my experience with them has been that they have a fair amount of ease, and at least with this pattern, it worked out for me. 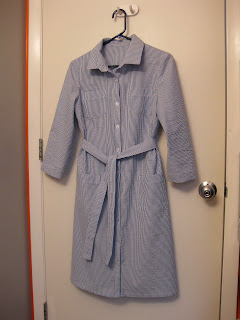 It fits great, and on a day when I've washed my hair and put on some makeup, I'll put it on and take some pictures for you.

You probably can't tell, but this dress has four patch pockets:  two on the chest and two at the hip.  I won't lie: they were kind of tedious to make, but honestly, I can't imagine the dress without them.  Plus, now that allergy season is in full swing, I need a place to put my Kleenex.

I'm thinking that when I wear this for real, I'll pair it with that voile infinity scarf I made a couple weeks ago, and roll up the sleeves for a little more insouciance: 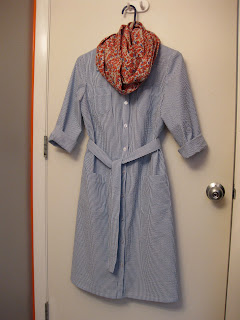 I like how the stripes and flowers look together: 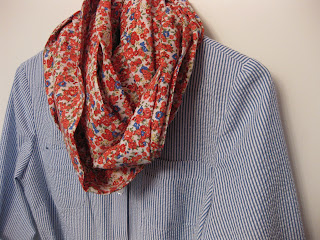 I will be making this again for sure, in a fabric that won't fight with me.  In all these months of sewing, I've really only been using cotton and silk (with my first Jasmine being the only exception).  When I was prepping the fabric, after it came out of the dryer I was really excited because it was so wrinke-free!  (Well, except for the seersucker wrinkles that are supposed to be there.)  That should make this a pretty good traveling dress.  But after I cut it, man, did it fray!  Good thing Sergio was there to help me out with that.

In other news, I also did a fair amount of knitting over the weekend, but not on Miette!  I felt like I needed to get going on Winnie, because even though I told everybody to buy extra yarn for their Miette sweaters, I didn't buy any extra for Winnie!  (In my defense, I usually do buy extra, but I was already buying 9 balls, and I felt like that should really be enough for a short cardi.)  Anyway, after I finished the first front, it looked like my supplies were dwindling a little too fast.  So I powered through the second front and almost half the first sleeve, trying to gauge if I'll have to order some more.  But I think I'm going to be OK!

For the knit along, I know that Heidi has cast on, and I think by the time I publish, Jo will have too!  I'm really hoping to see some pictures other than mine on the Flickr group soon!  I think I won't need to do any more posts on it for a little while, until we get closer to removing the sleeves.  But if anyone has any questions they'd like me to address, please let me know!
Posted by Gail at 1:46 PM