I know of a few people who are really coming along with their sweaters!  I've actually been working like crazy on my Winnie sweater, so I'd better catch up!

I've heard from a couple people that they find Row 25 confusing, so I wanted to put up a couple pictures.  In row 25, you're told to cut the yarn and then cast on 10 stitches, purl across the live stitches already on the needle, then cast on another 10 stitches at the other end of the row.   The reason Andi has you do it this way is so that one side of the front neck doesn't end up being one row higher than the other side - since we're using heavier yarn, this would show.  Here's how I did it:

I cut my yarn, leaving about a 6" tail.  Using the end of my needle I would have used if I were just going to purl back across the row, I used the long tail method to cast on my 10 new stitches, then purled across the row using that same end of the needle.  After I'd purled a few stitches, I just tied the cut end and the end from the new cast on together loosely: 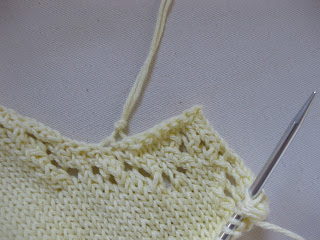 At the other end of the row, I used the knitting on method to cast on another 10 stitches.  The cast on at this end doesn't involve cutting the yarn: 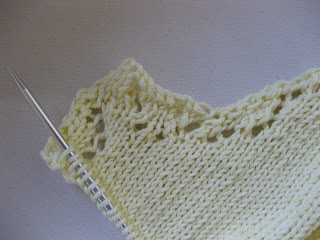 Bear in mind that I'm showing you the right side of the work, but you'll be doing this row on the wrong side (purling).

I used long tail and knitting on cast ons because those are the easiest for me, and they're very basic (i.e. not decorative).  But you can use any cast on method that works for you.  The important thing is that both the cast ons happen on the same row, to avoid one side of the neck being higher than the other.  There are some videos of different cast on methods here.

Happy knitting!
Posted by Gail at 7:57 AM

New comments are not allowed.