Here she is, at long last.

In my Ravelry projects, I called her New Year's Evie, because I started the project the day before New Year's Eve, 2010.  I worked on this off and on over two and a half months.  During that time I also made another cardigan, a fair isle vest, a couple of hats and a big fluffy shawl.  It's hard to be monogamous to 1576 yards of mainly stockinette knit on size 2 needles.
When I bought the Thrown Together book, this sweater was at the very top of my to-knit list.  As I mentioned before, this is the second time I've made this sweater.  I love its vintage look, the long slouchy line, the pockets.  I've said it before, and I'll say it again, Kim Hargreaves is a genius. 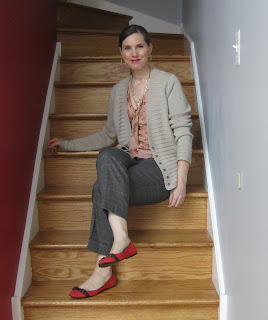 The sleeves on this one came out longer than my first one, but I don't mind because I generally push them up anyway.  Actually the whole sweater feels slightly larger than the first one I made, which may have to do with the fact that I steam blocked this one and wet-blocked the first one.  (Wet blocking is on hold for me until I find some new pins that won't rust.)

I love this yarn:  Rowan Classic Cashsoft 4 Ply.  I had bought four bags of discontinued colors a few years ago, and am slowly working my way through them. It is a real joy to knit with, and the finished fabric is so soft and silky.  The pattern called for 8 balls in my size, and I used exactly 8 - I think I had about 2 yards left over.

Sewing together took me 6 Ugly Betties - three episodes the first day and three the second.  Well, really just two and a half episodes, but I had to finish watching!