I've been spending time yesterday and today finalizing plans for some blogger meet-ups next week while I'm in NYC - and I haven't even finished posting about my trip to Toronto!  So I wanted to get a few more pix up before the memory completely fades.  Just kidding - I had such a great time with these ladies, I won't be forgetting it!

I had the good fortune to meet up with SIX bloggers from Toronto.  I'm listing them here so that in case you don't know any of them, you can meet them too via their blogs!

My lovely hostess, Andrea, of Stitch Parade.
Sara, one-half (with her sister) of Hamilton Chicklets.
Kristin, of K-Line.
Gillian, of Crafting a Rainbow.
Katja of Gjeometry.
And Tasha of Little Things.

Some of these ladies I knew from their blogs, and some from Instagram, which I've come to view as micro-blogging.  Every single one of them is just lovely, as you'd expect!  And I felt so honored that Gillian, Katja and Tasha came from quite a distance outside the city to meet me.  Thank you so much ladies!

So here are some of the fun things we did.

On my second evening in Toronto, Andrea, Kristin, Sara and I went out for Leopard Cocktails.  What's that?  Well, the same as normal cocktails, but you wear your leopard-print clothing and/or accessories! 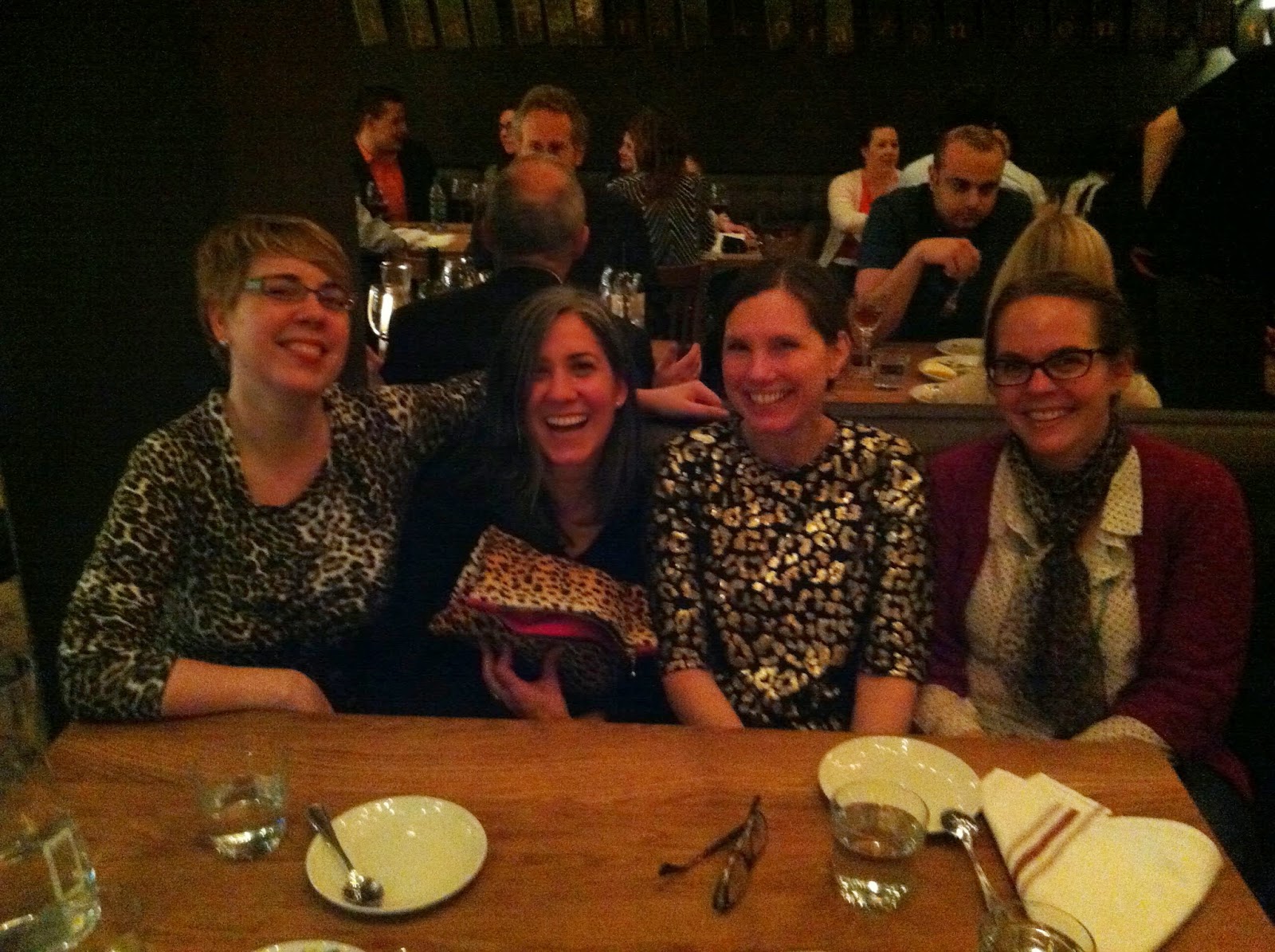 I mentioned before that a lot of our time was spent just knitting and hanging out, and visiting the fabric shops in the garment district.  I'm an idiot and didn't bring my camera so I don't have any pictures of that!

Saturday was a big day.  The first thing we did was to hit a currency exchange so I could get some Canadian money.  I LOVE the Canadian money - it's so beautiful, and it's made of plastic!  And holograms! 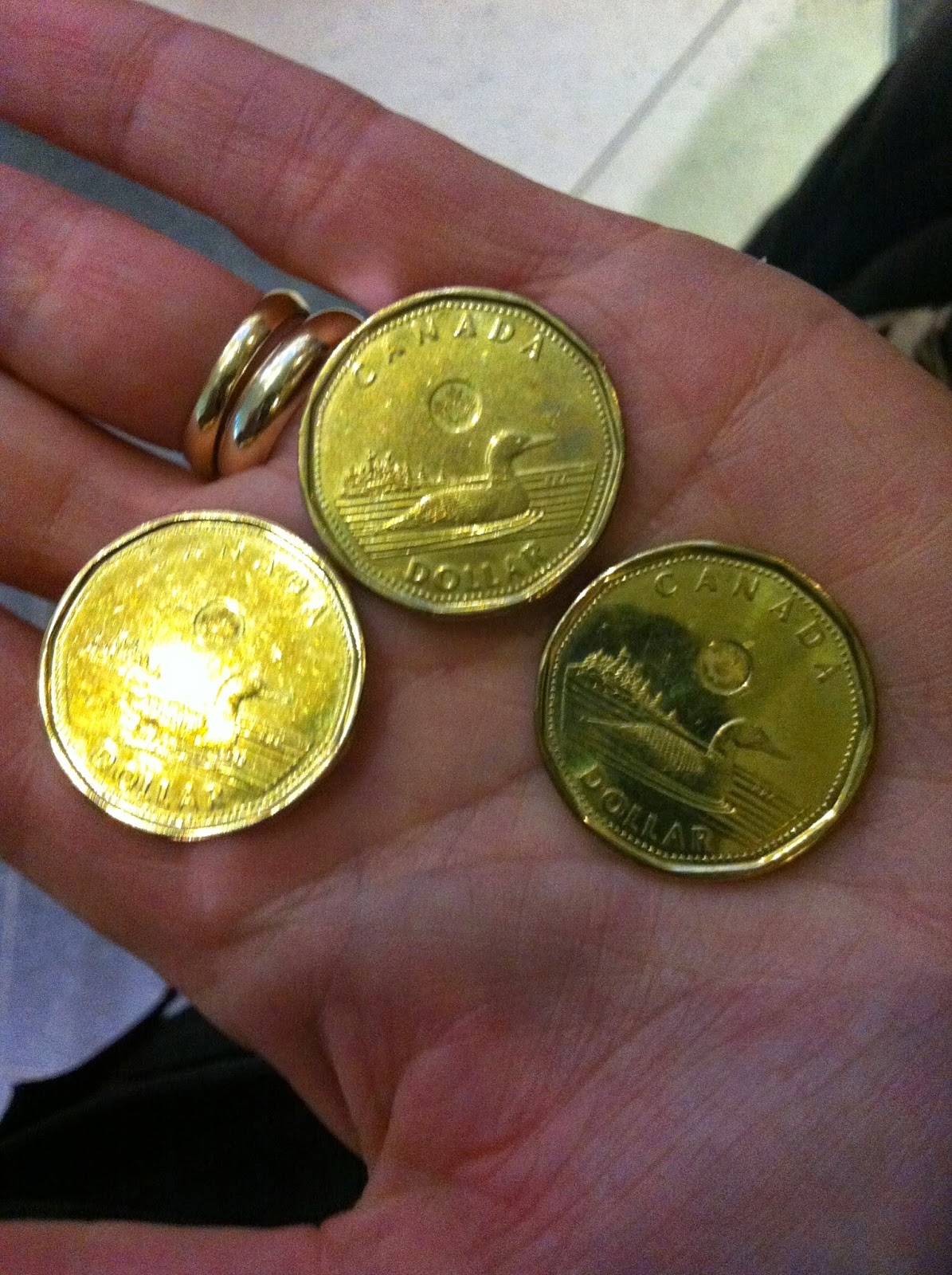 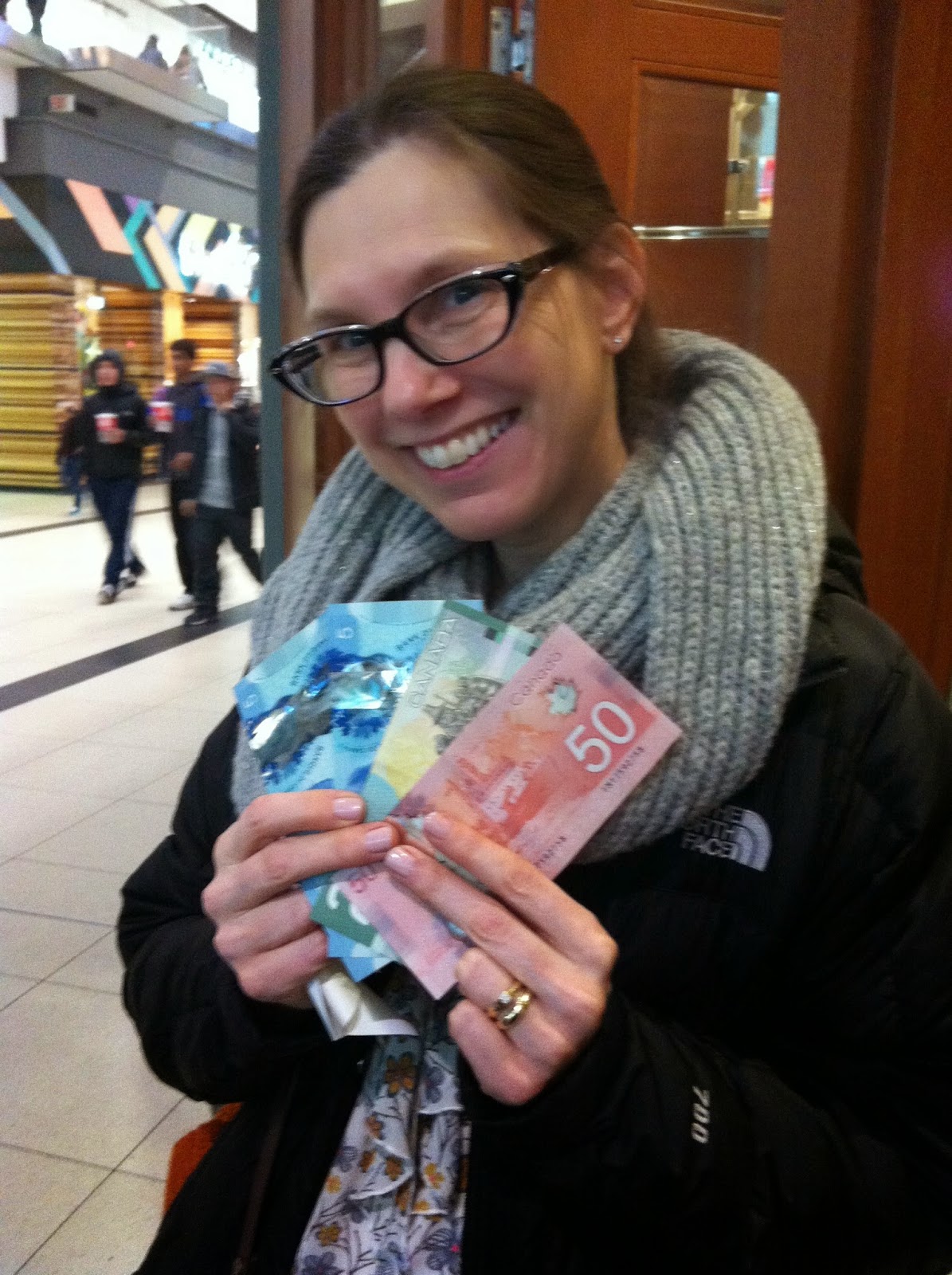 We met up with Sara at the exchange, and then she, Andrea and I went to the Distillery and walked around a bit, then stopped for a beer.  It was darn cold, so we all wore our hand-knit hats: 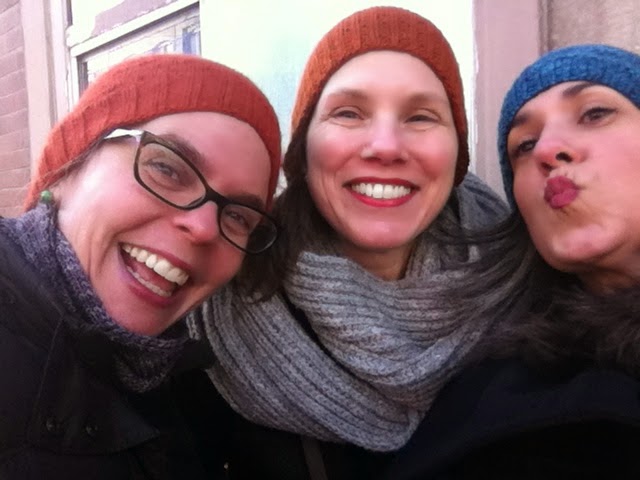 We had a date with the whole group for dinner, and had planned on going home first to gussy ourselves up.  But we ended up playing around in the Distillery too long, so we just had to go as we were.  No worries though - we had a fantastic time anyway!  Here's all of us except Andrea (who took the picture) at dinner: 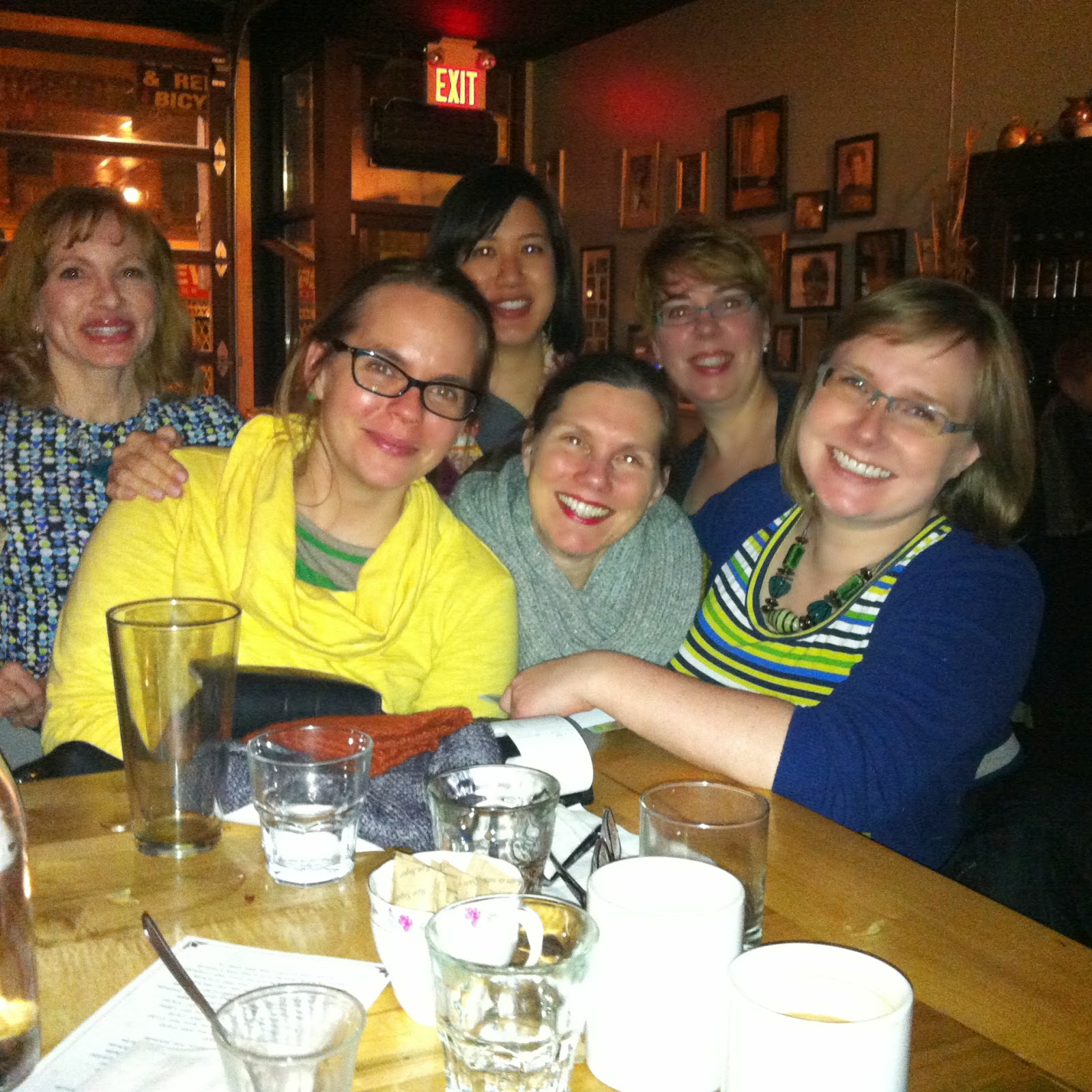 We ended up getting kicked out of that restaurant after about an hour (! - apparently this is a thing that happens in Toronto?  We were a little outraged.)  A few of our group had to head home early anyway, but the remainder decided to find a coffee shop so we could keep talking.  And we did find a nice coffee shop nearby - which also served cocktails!  So we drank those instead.  It was super dark in there and we had a lot of fun trying to get a decent picture.   Believe it or not, this one is the best, despite our glowing eyes! 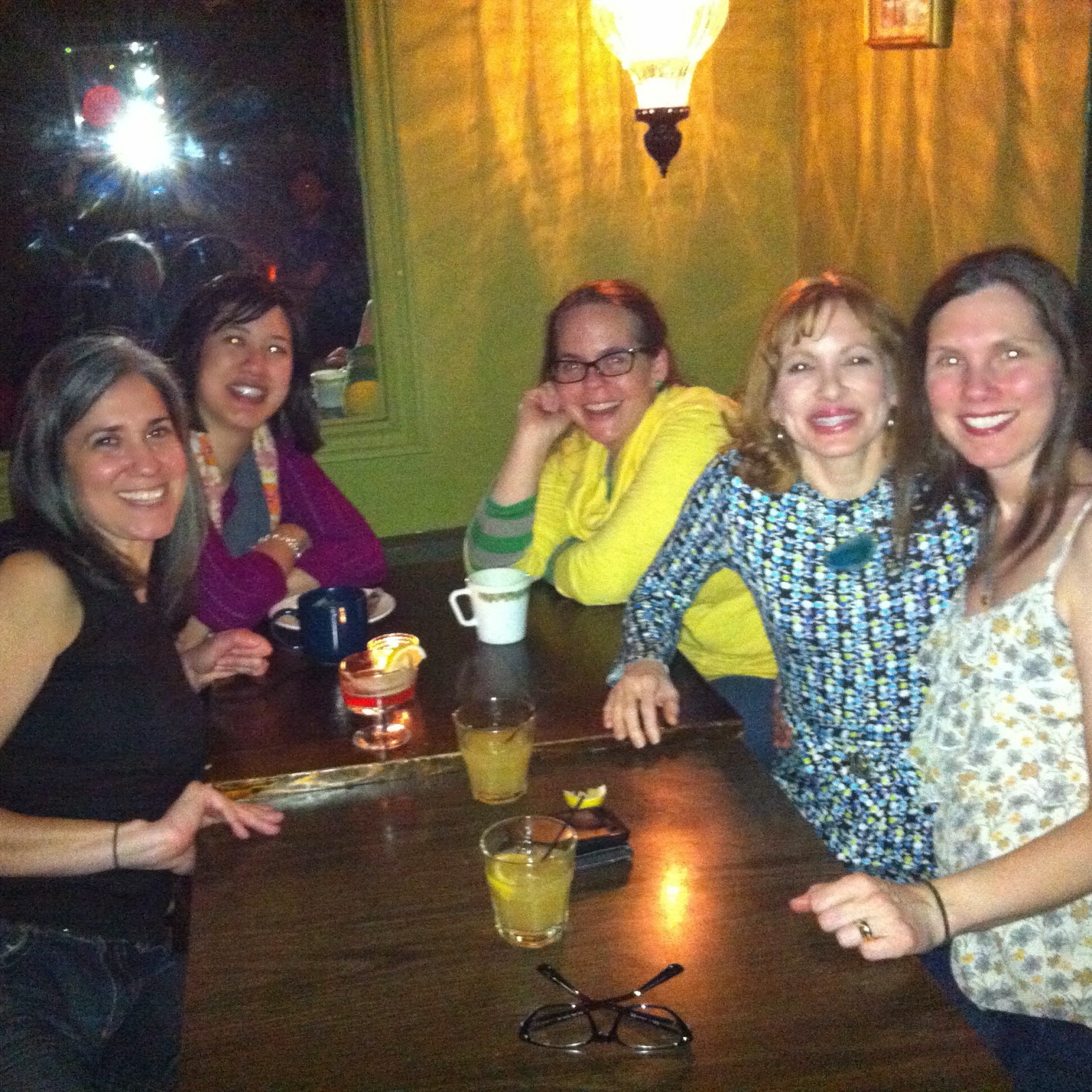 So that's it!  I have very few pictures from this trip, and the ones I do have I had to scrounge off my friends!  I'll try to do better in New York, but it's so easy to get absorbed in the moment and forget to document!
Posted by Gail at 11:02 AM

Email ThisBlogThis!Share to TwitterShare to FacebookShare to Pinterest
Labels: meet-up