Conversation a couple of weeks ago:

hahahaha - I love that man!  He always makes me laugh!

I had a piece of kelly green cotton/lycra jersey I'd purchased to make a dress that ended up being too lightweight for said dress.  It had been sitting in my stash for about a year and I just couldn't think of a use for it (I already have a couple of kelly green t-shirts), so I decided to use it to make a muslin of the Thread Theory Strathcona Henley.

Why muslin a t-shirt?  Well, Hubby has some fitting issues too.  He's very broad through the shoulders with a thick neck, but narrower through the chest and waist.  And he's got short arms.

The sizing info on the pattern goes by chest measurement and would have put Hubby into a medium.  My original plan was to trace a large at the neck and shoulders, and grade it down to a medium at the chest and waist.  But then I took a look at the finished measurements and discovered that there's 1.5" negative ease built into the size medium.  So I got out one of his favorite t-shirts to compare and realized that the medium would have been smaller than he prefers.  And at that point, I took a look at the pattern again and noticed that the description says "slim-fitting t-shirt."

In the end, I decided to trace a size large throughout for the muslin, as a baseline for future changes.  And as it turns out, it fits pretty well as is.  He's happy with it, at least. 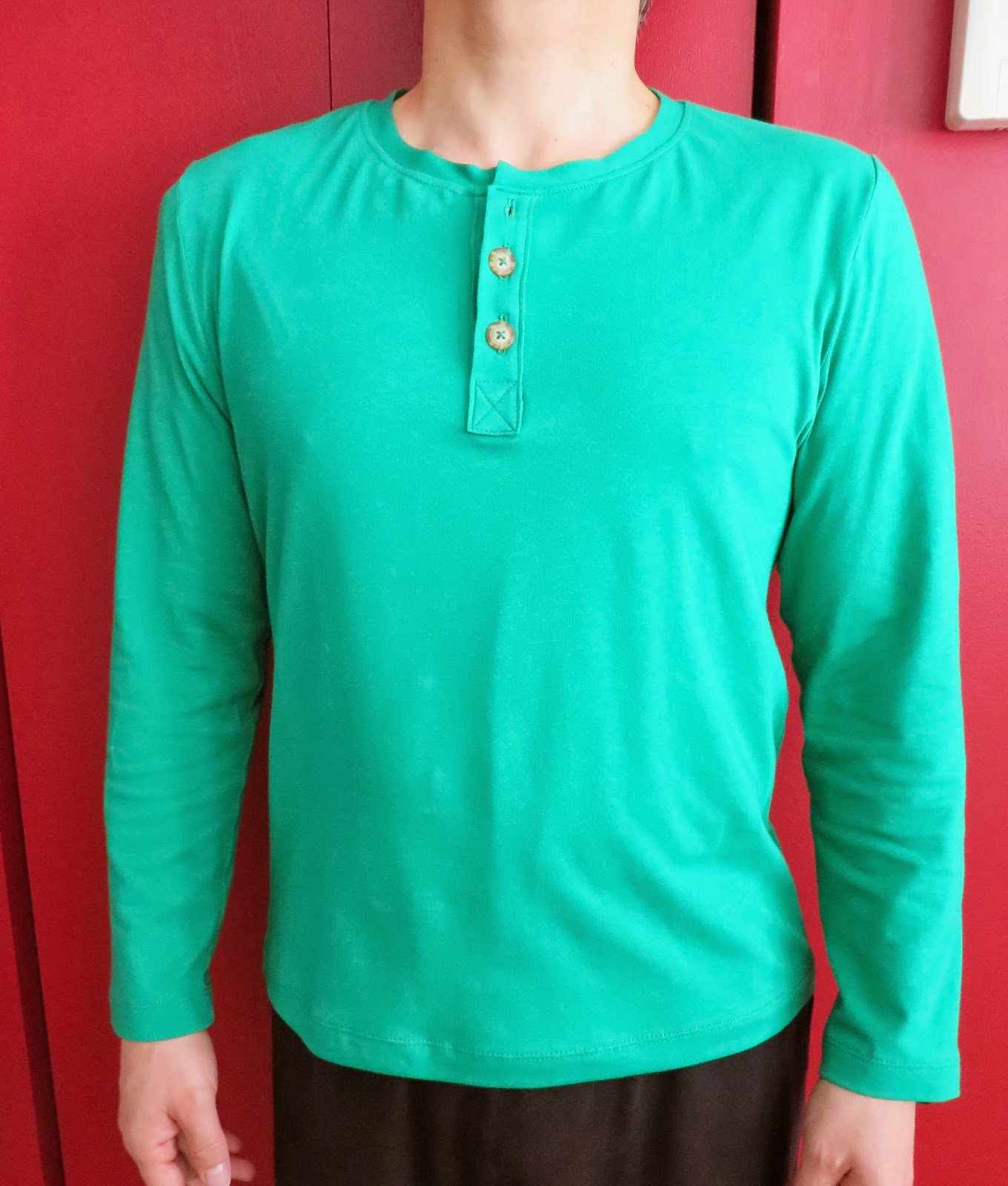 Hubby isn't a big guy, he's just got a muscular build.  So I wonder if bigger guys will be sized out of this pattern - he's in a Large and the pattern only goes to XL.

The Henley version of the pattern is designed with hem bands for both the bottom and the sleeves.  I knew Hubby wouldn't like the hem band at the waist, so I didn't even trace it.  I did cut out the sleeve hem bands, but after he tried on the shirt he told me he didn't want them.  Of course, the sleeves were too long for him, as they always are.  This is the sleeve sans band, just turned back 1" and hemmed on the coverstitch machine.  I had to cut 4" off the bottom of the shirt, and then turned back 1" for the hem there as well. 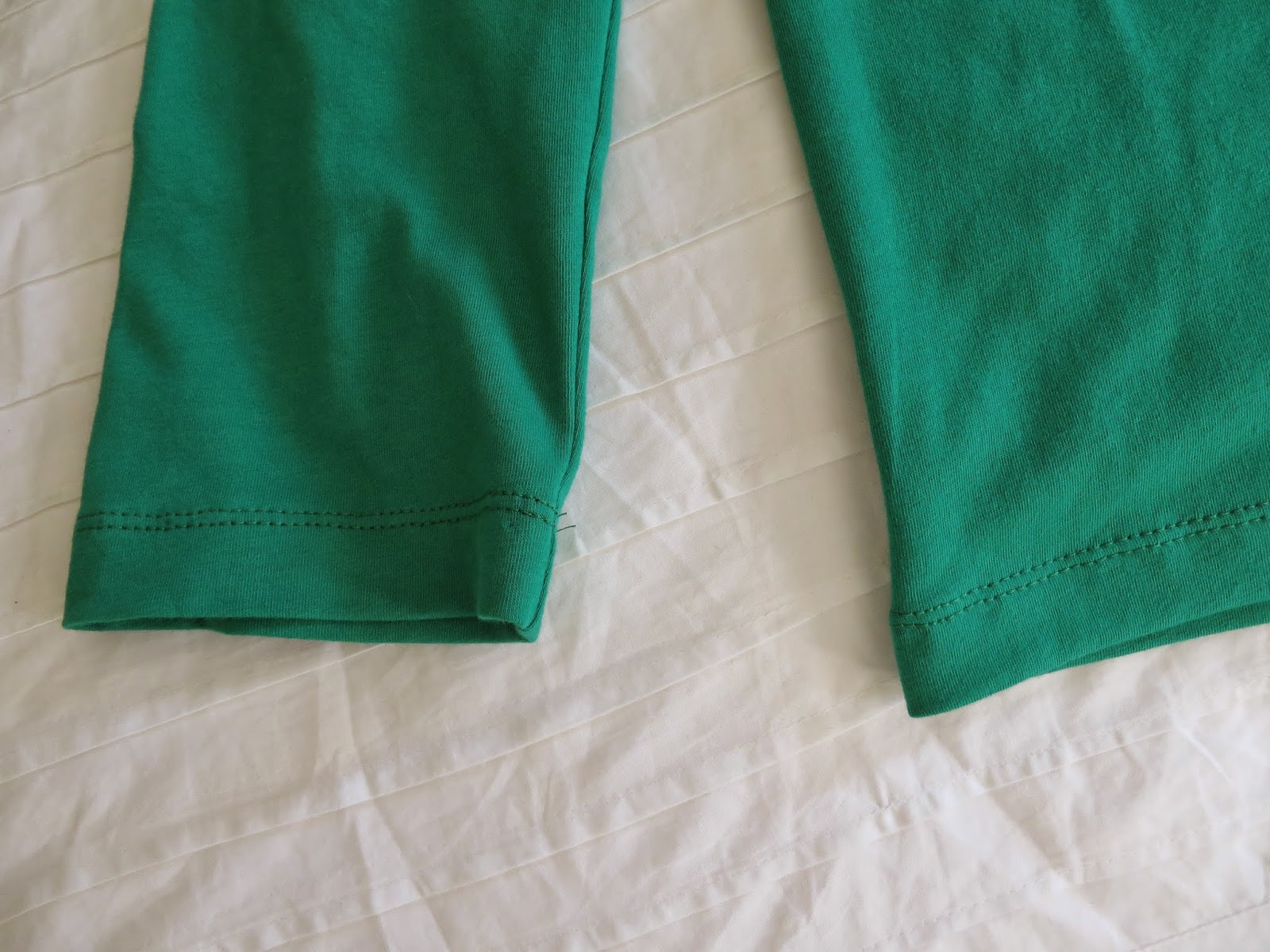 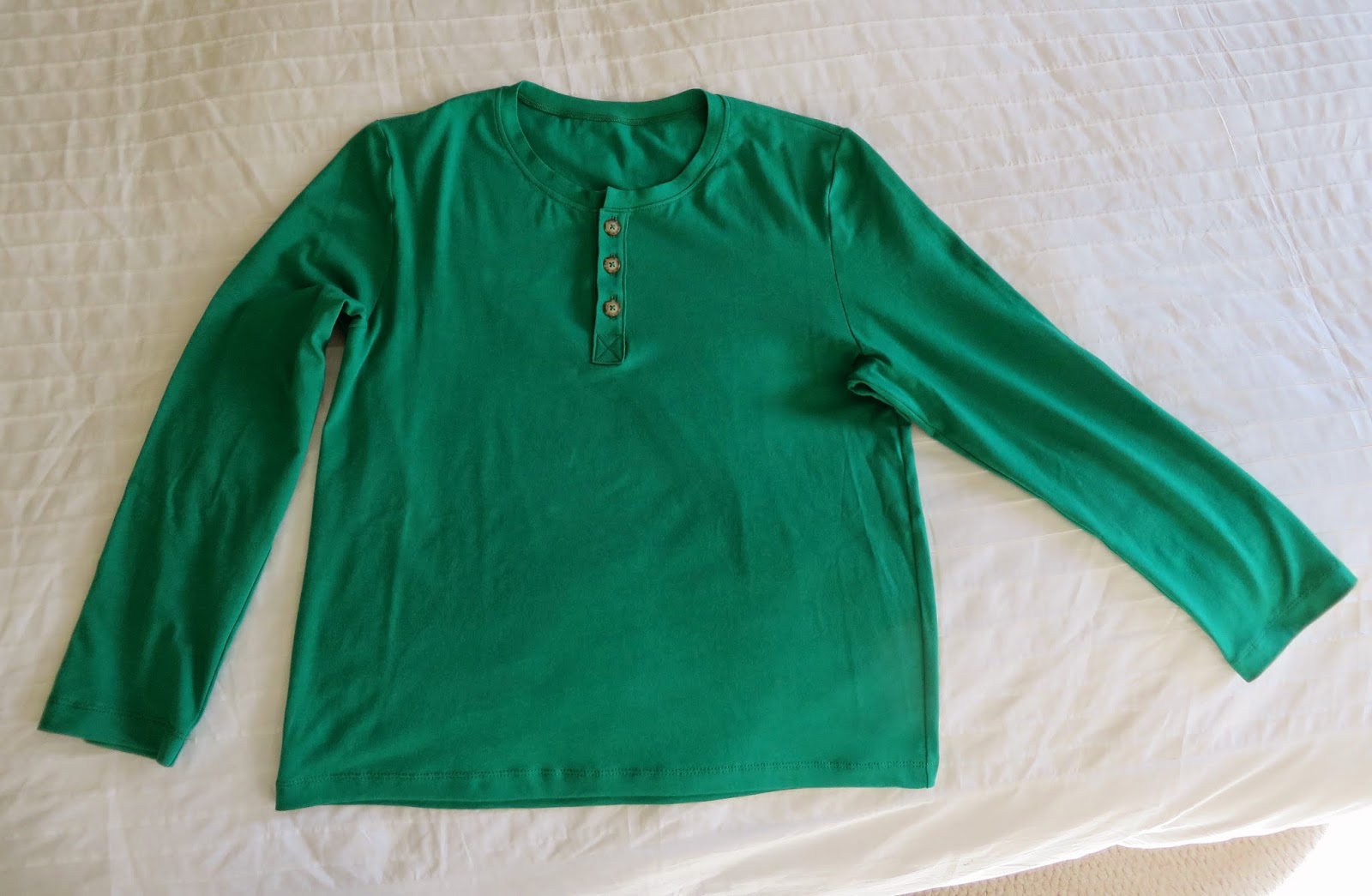 One thing I liked about the pattern is that all the pieces are full size, and are cut from a single layer.  However, it does make for a large number of pages to print out.

The placket was the most difficult and time-consuming part of making this shirt, as you'd expect.  The instructions were very clear, I'm just not a fan of sewing knits on the regular sewing machine, and even less of sewing buttonholes on knits.  My placket looks OK, but not perfect - which is good enough for a muslin of a t-shirt. 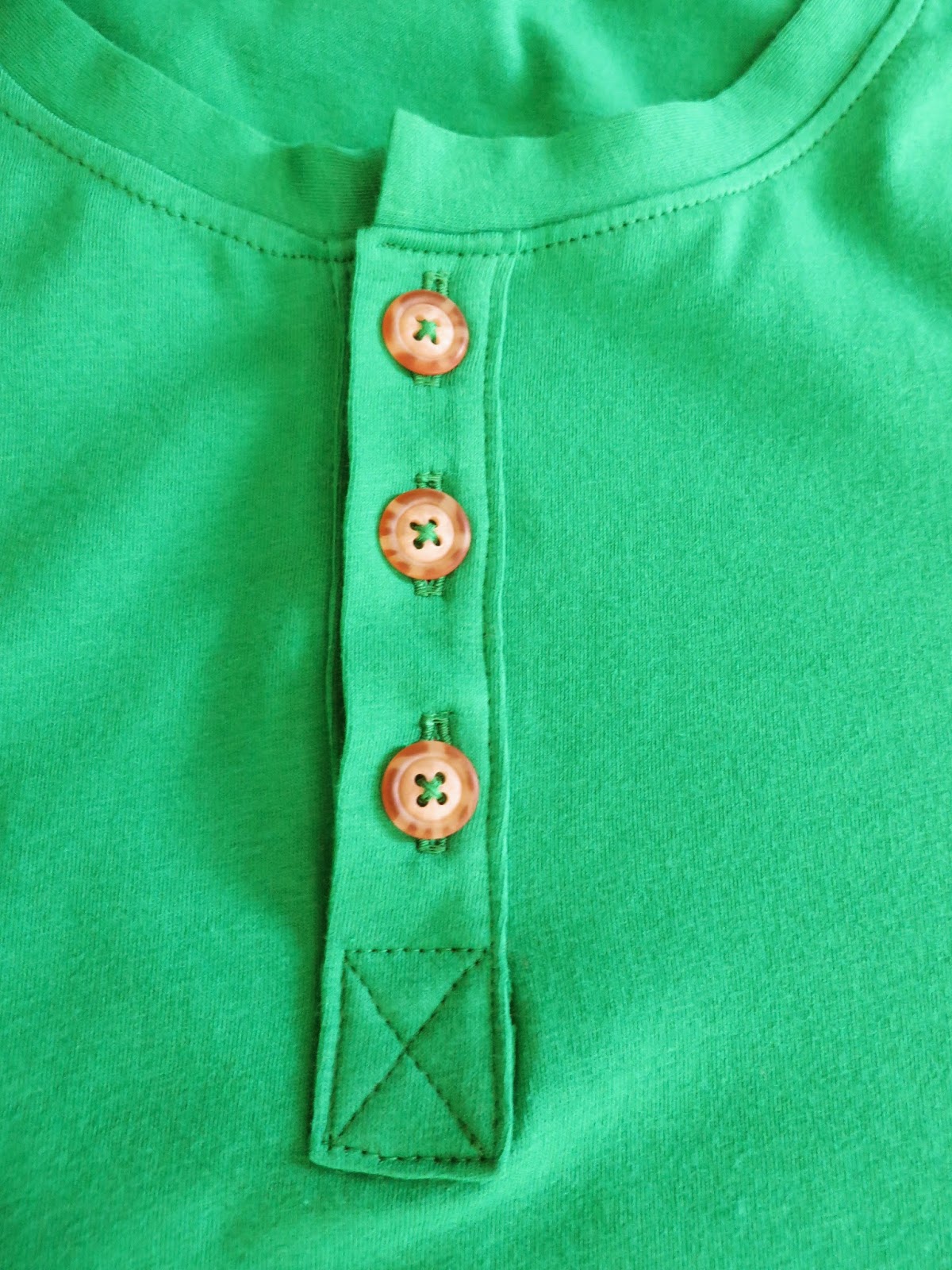 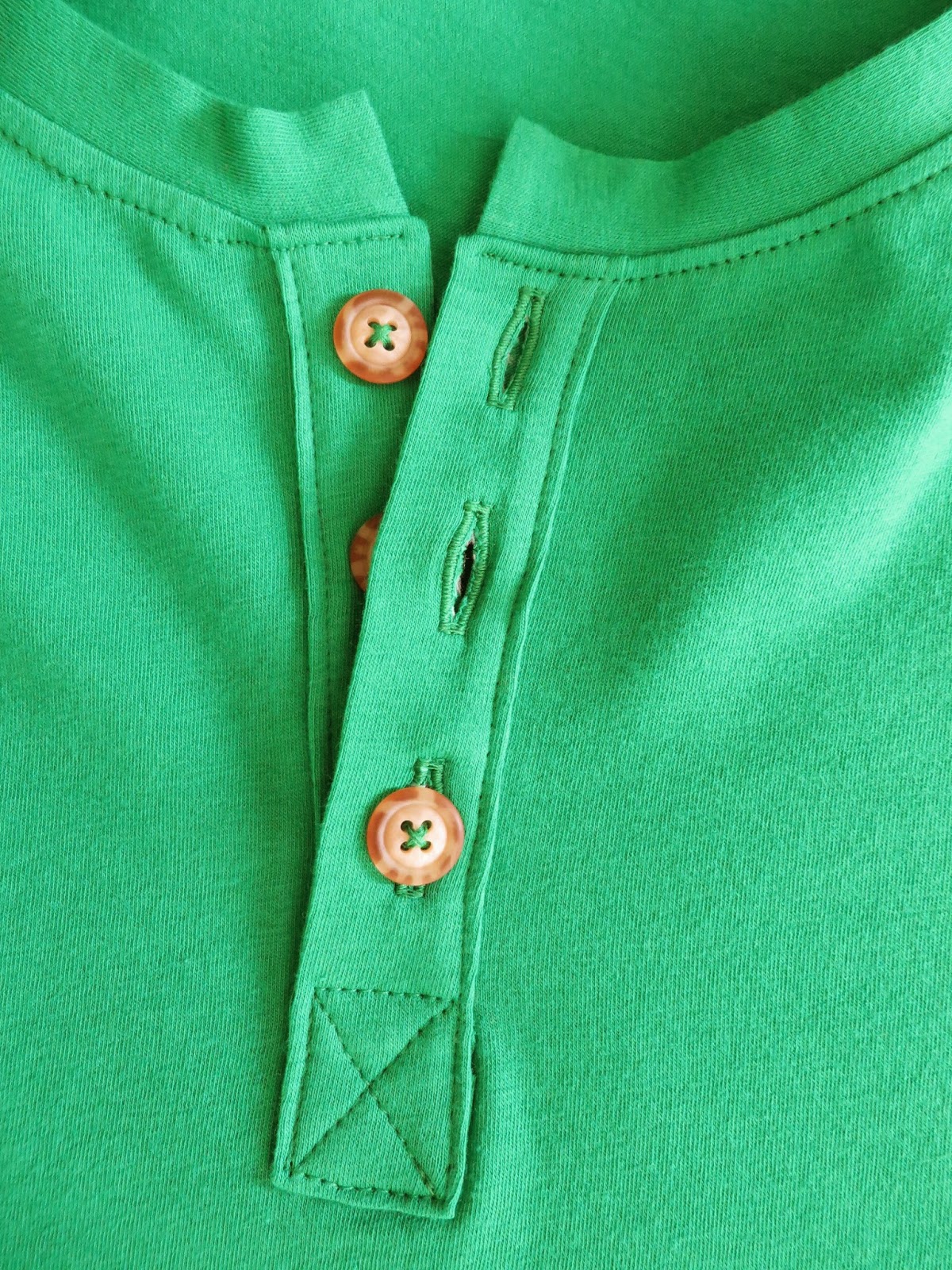 I accidentally cut off a bit too much of the inside placket before stitching down the X, and some of it popped out on the inside.  So if you make this shirt, be careful of that.  You can see it here at the upper left of the X. 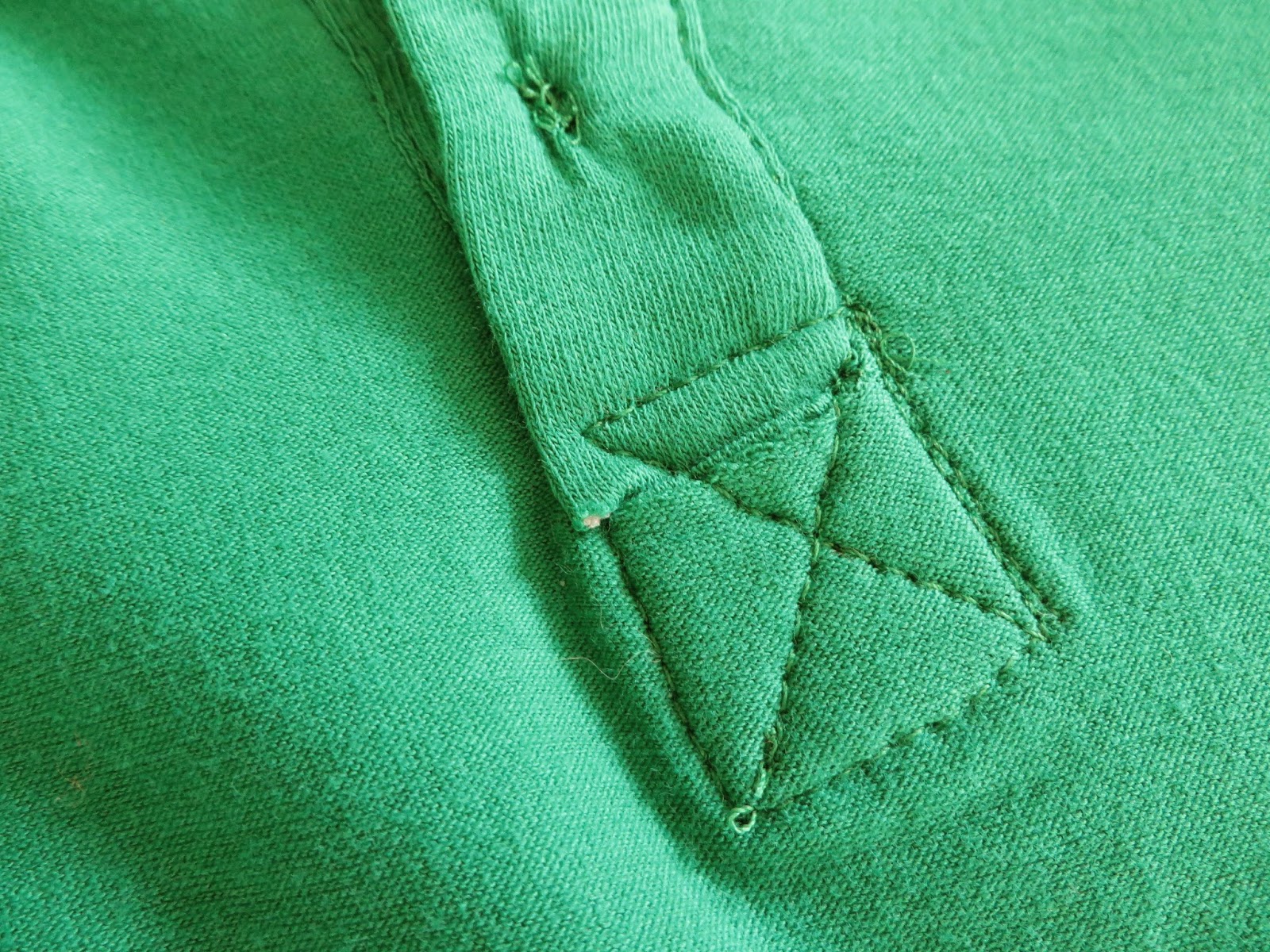 Overall the instructions for this shirt were really good.  The only thing I'll change the next time is the shoulder stabilization.  The pattern says to place the stay tape on the back, and then press the shoulder seam toward the back once it's sewn.  My stay tape is a bit stiff and doesn't like to bend, so I always apply it to the front and press my seams toward the back.  On this shirt I did apply the stay tape to the back, which means that my shoulder seam is pressed toward the front.  Again:  not a huge deal.  It's a t-shirt. 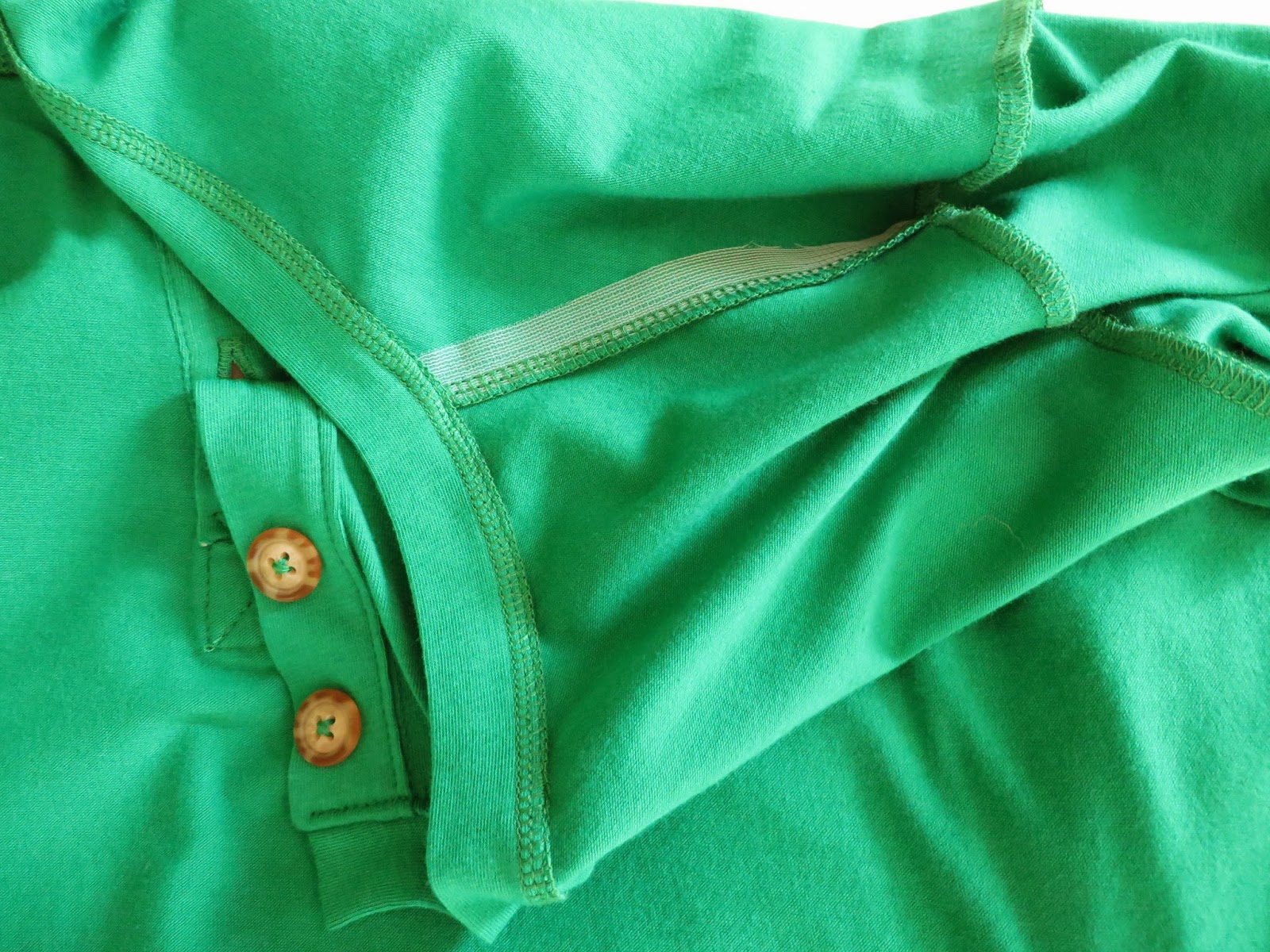 Finally, my friend Shar and I were comparing notes on this pattern.  She told me that she'd had to raise the neckline by an inch, as her husband found it to be too low.  As I said before, Hubby has a muscular neck - it's one of the things that makes buying RTW shirts for him a challenge.  I didn't change the neck at all and it's a nice, close fit on him. 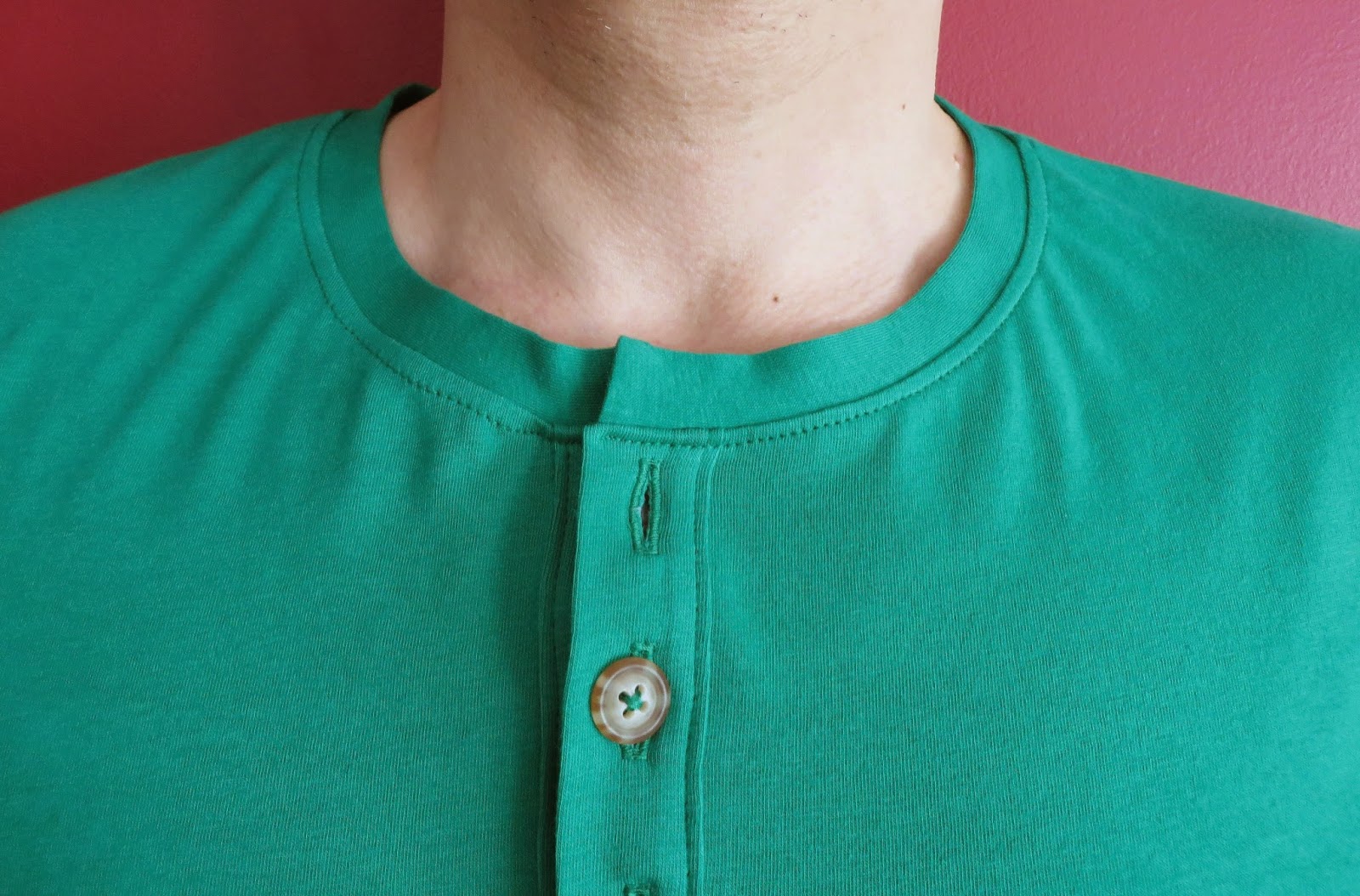 So keep your guy's neck size in mind if you decide to make this pattern.

Now that we know this one fits him, we can move on to colors he actually likes!

Have any of you tried out this pattern?  Do you plan to?  I'm planning on making him the Jedediah pants one day too.  After I make myself a few more things :-)
Posted by Gail at 7:48 AM