After we got back from our trip, I had a lot of catching up to do - as you do after being away, even for a bit.  I didn't feel like I had the time or energy to start a new sewing project, so instead I concentrated my little bit of free time on my knitting and on finishing up my Feather Bed Quilt.

I didn't have a whole lot left to do on the quilt.  I spent about 2 hours on the remaining quilting over a couple of days, and finished that up early yesterday morning.  I was so excited to be nearly done that I scrapped my plans for the rest of the day and trimmed the edges, cut my binding, pinned and sewed it on, then hand-slip stitched it, for a total of about 4 more hours work.  I was so engrossed that I didn't even take any in-progress shots! (Except one of the binding that I posted on Instagram.)

I finished up at about 4:30 yesterday afternoon, and immediately popped my new quilt into the washer.  After piecing, my favorite part of quilting is that final wash and dry - I love seeing how the quilt wrinkles up around the lines of quilting. 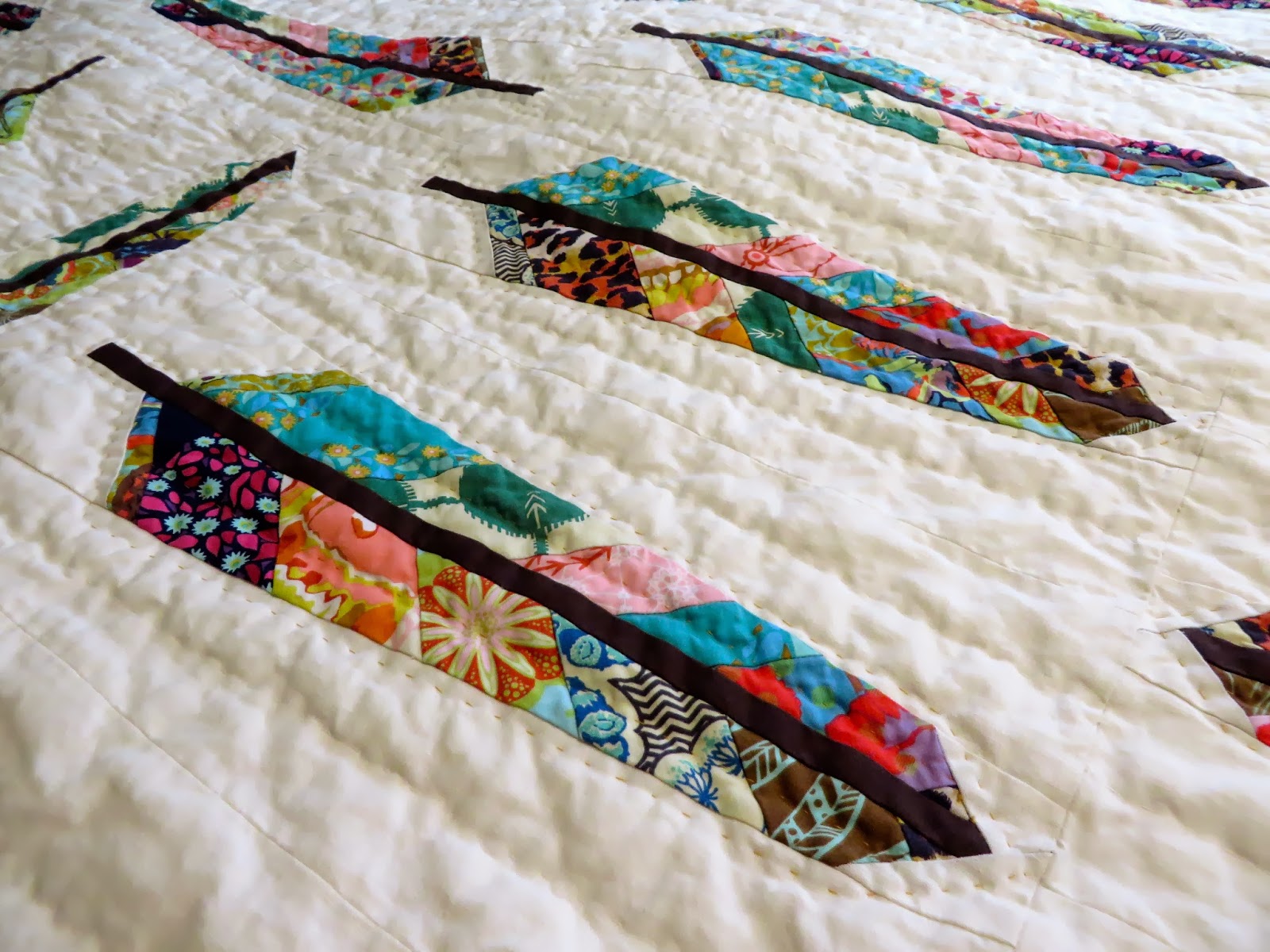 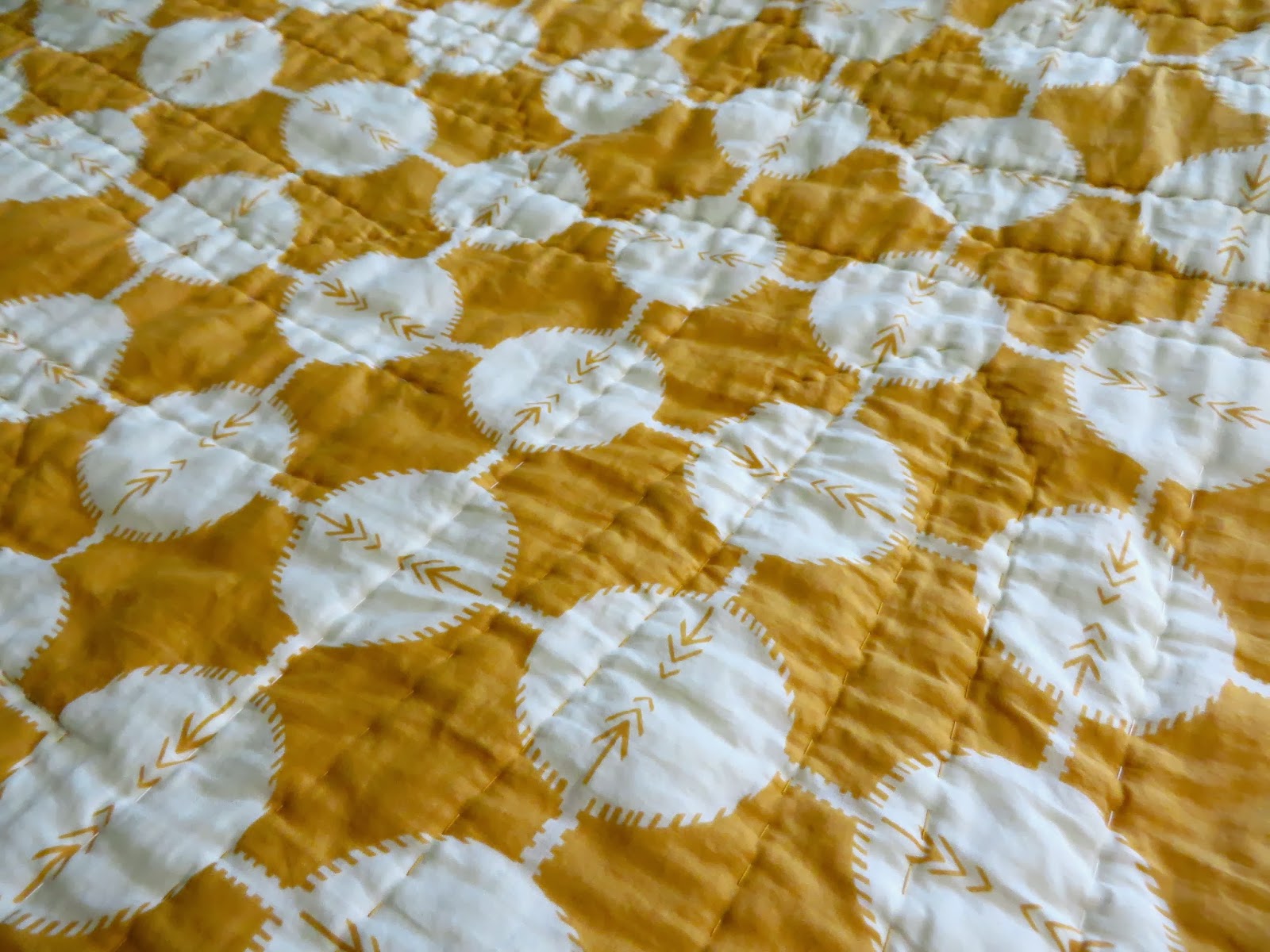 Here's the final reveal.  Honestly, it looks pretty much like the in-progress shots I've been showing all along, except that now it has a binding. 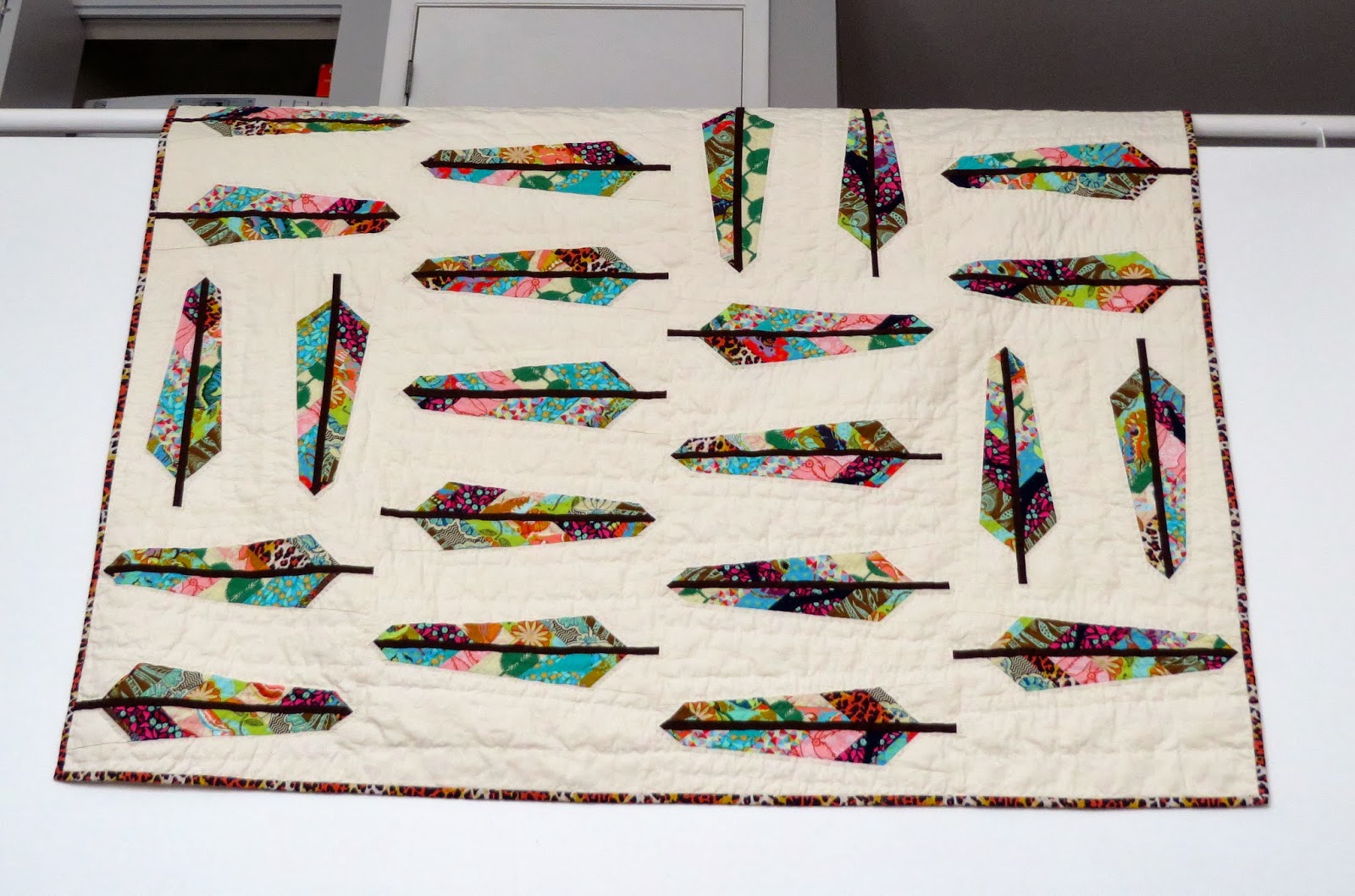 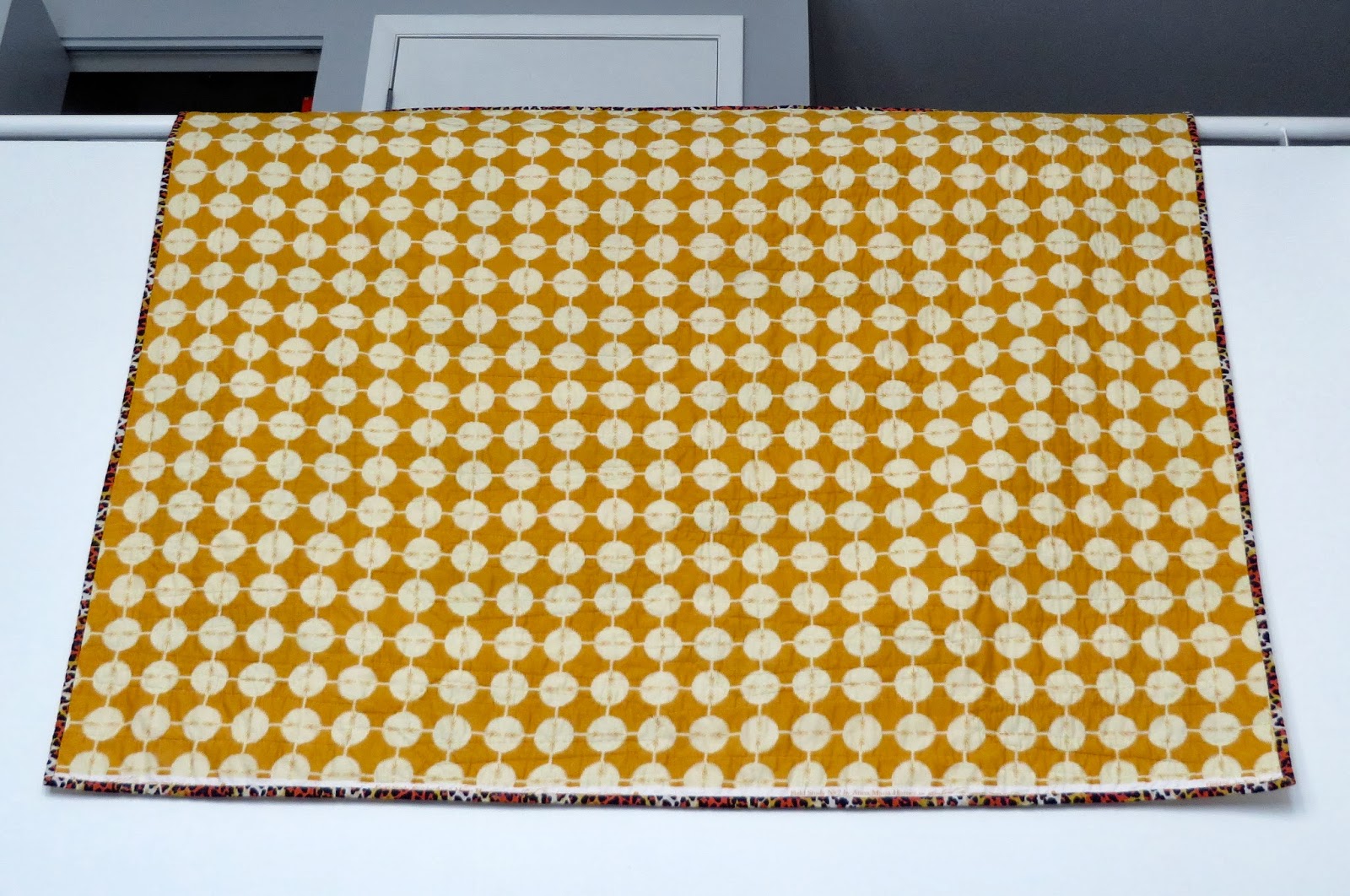 My backing is one full piece of Anna Maria Horner voile:  Coordinates in Saffron.  It's deliciously soft and silky.  My finished top measured 53" by 70", so I bought a two-yard piece of this 54" wide fabric.  However, I got some shrinkage after the pre-wash and my backing ended up a bit narrower than I needed.  So I got creative and incorporated the printed selvedge into the design; my love for the selvedge has already been documented! 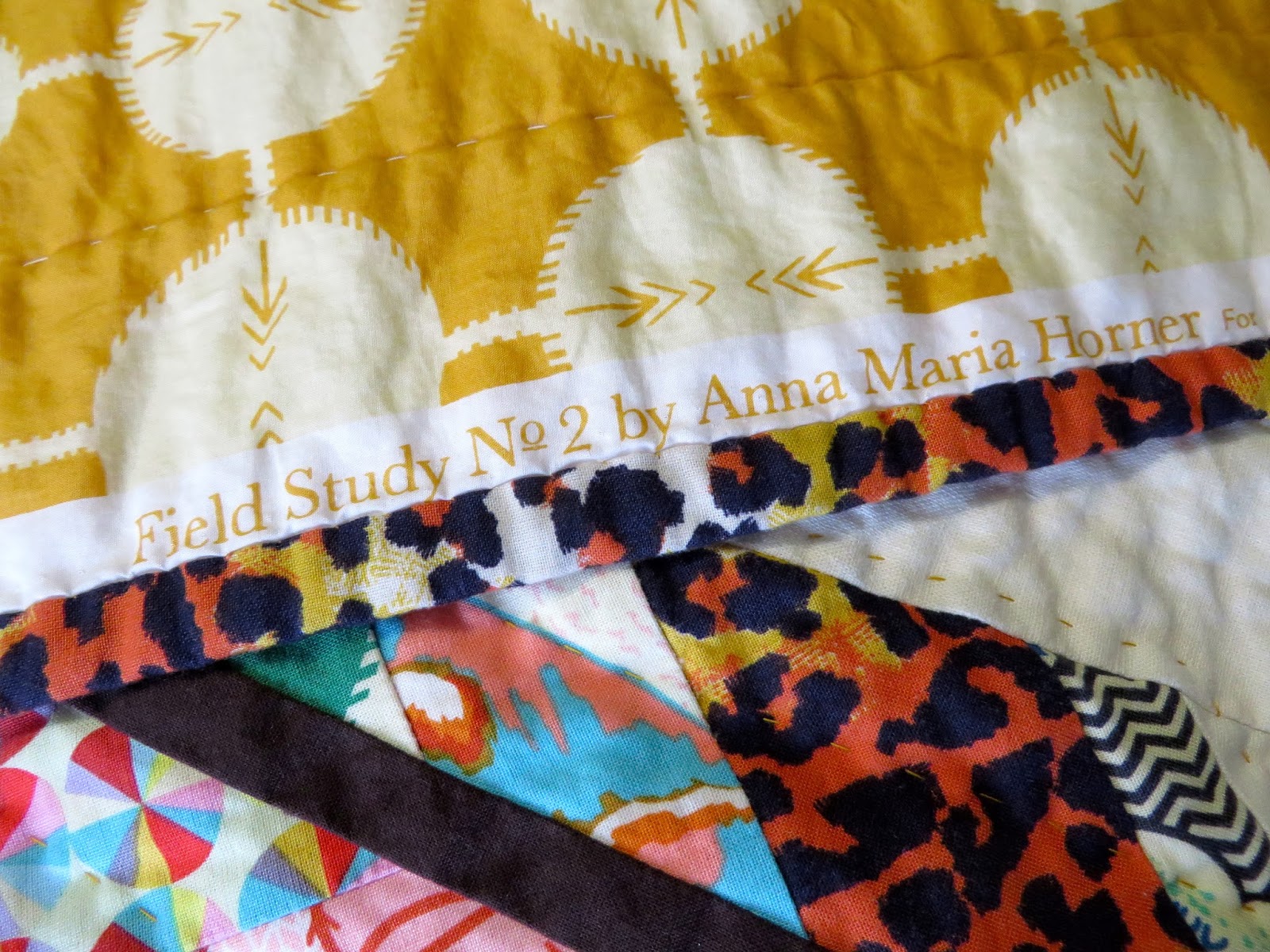 I think I mentioned in one of my previous posts that I made this quilt smaller than the "twin" size given in the pattern.  For my quilt, I made 22 feathers rather than the 38 given in the directions.  This yielded a quilt exactly the size I like.  Here it is on top of my king size bed, to give an idea of the size. 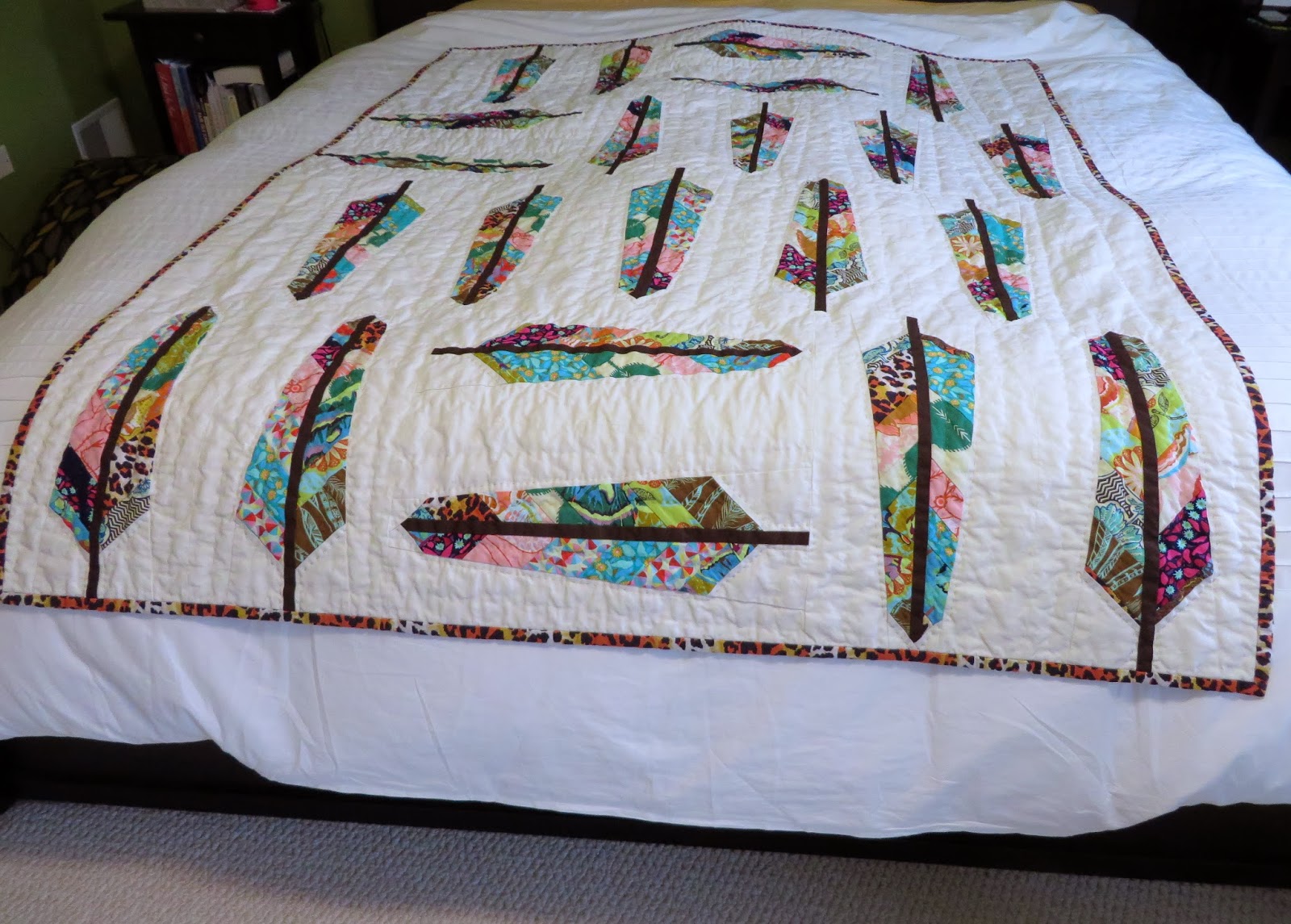 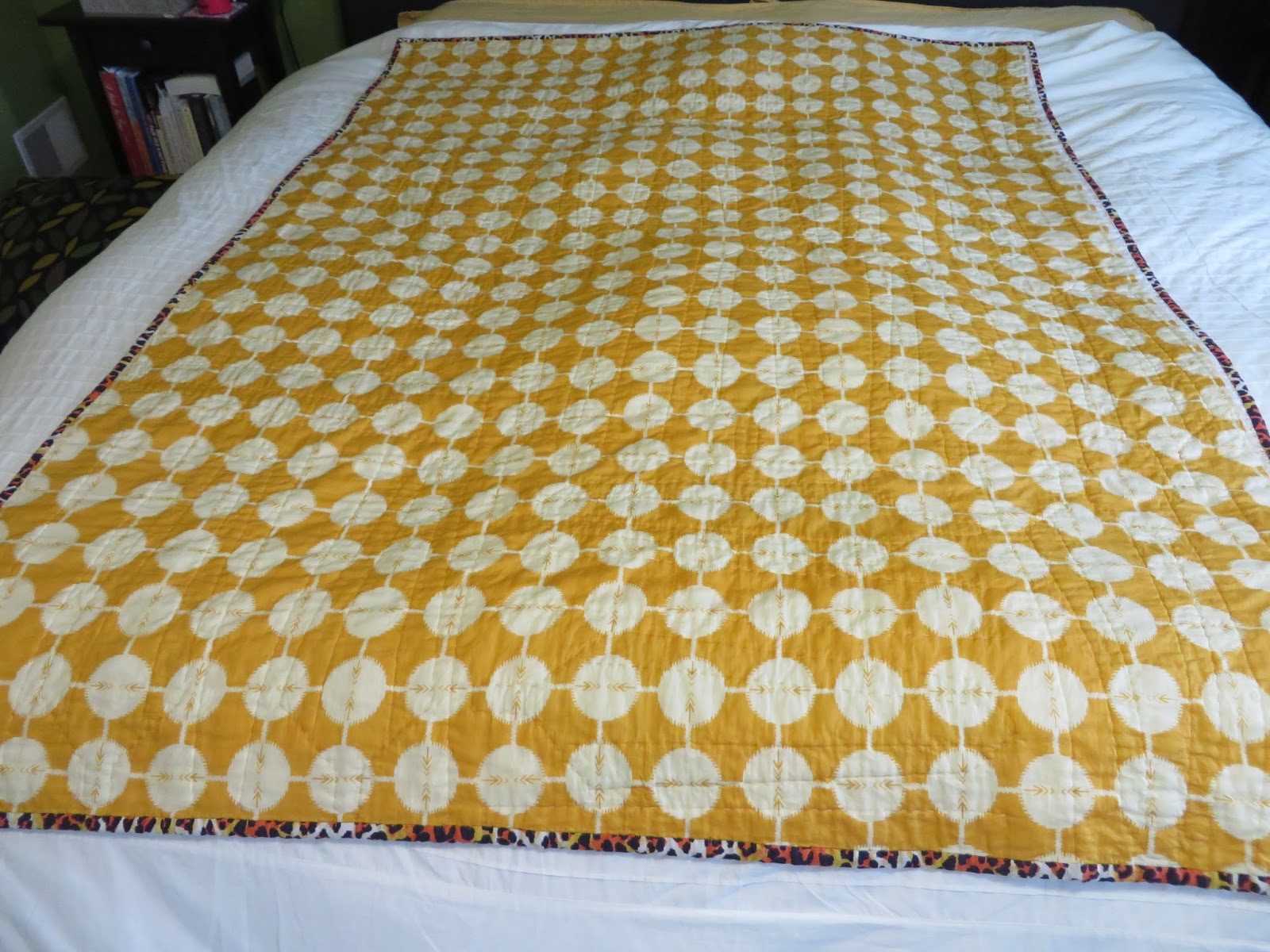 My feathers were made using all the prints from the Patina colorway of the Field Study quilting cotton line.  For the binding, I used another piece of the same leopard print as in the feathers.  I cut my binding strips 3" x width of fabric, and then attached it with a 3/8" seam allowance rather than the 1/4" usually used.  I did it that way partly because I wanted the leopard-ness to be a bit wider and more noticeable, but also because it just feels more secure to me. 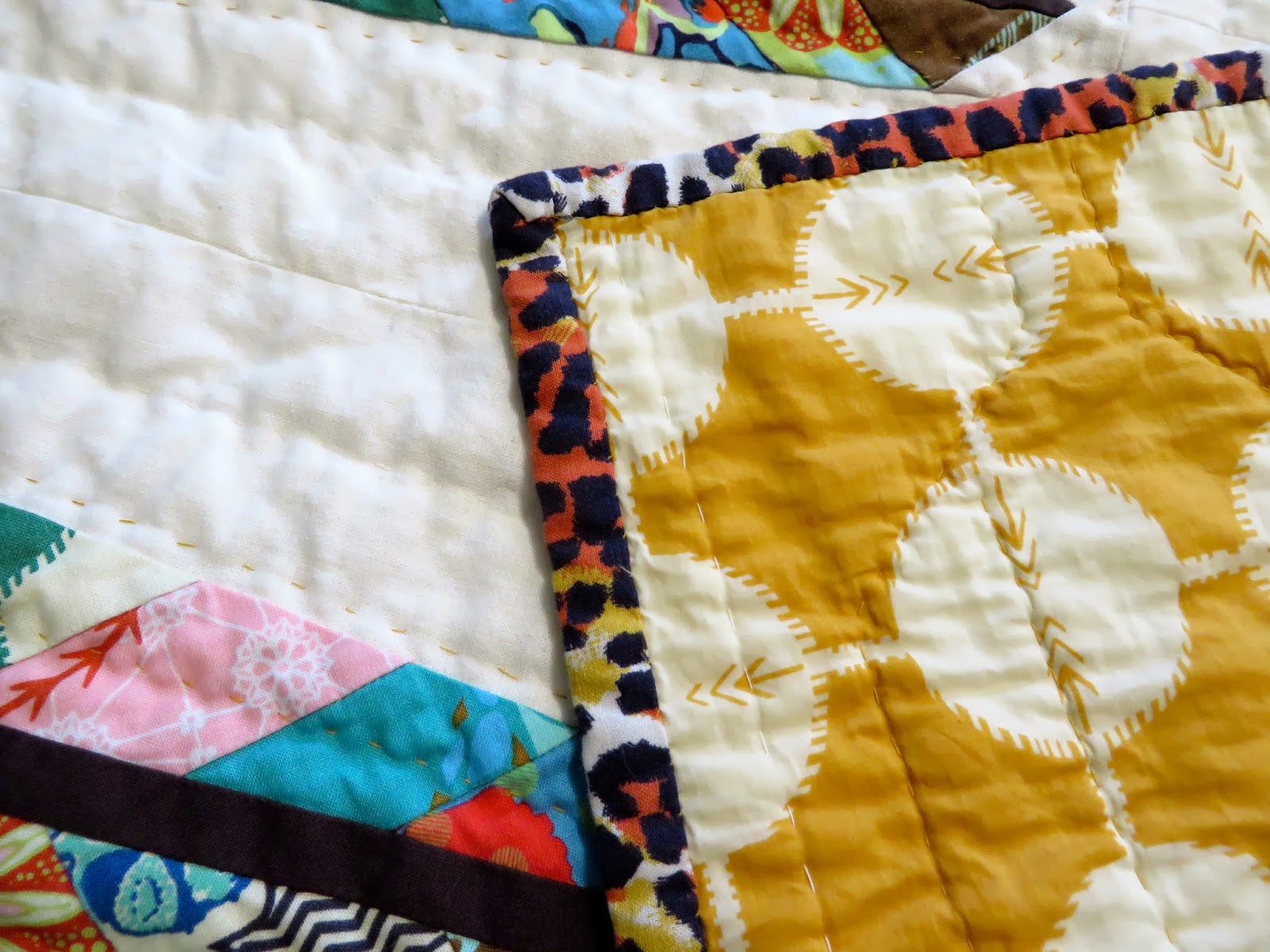 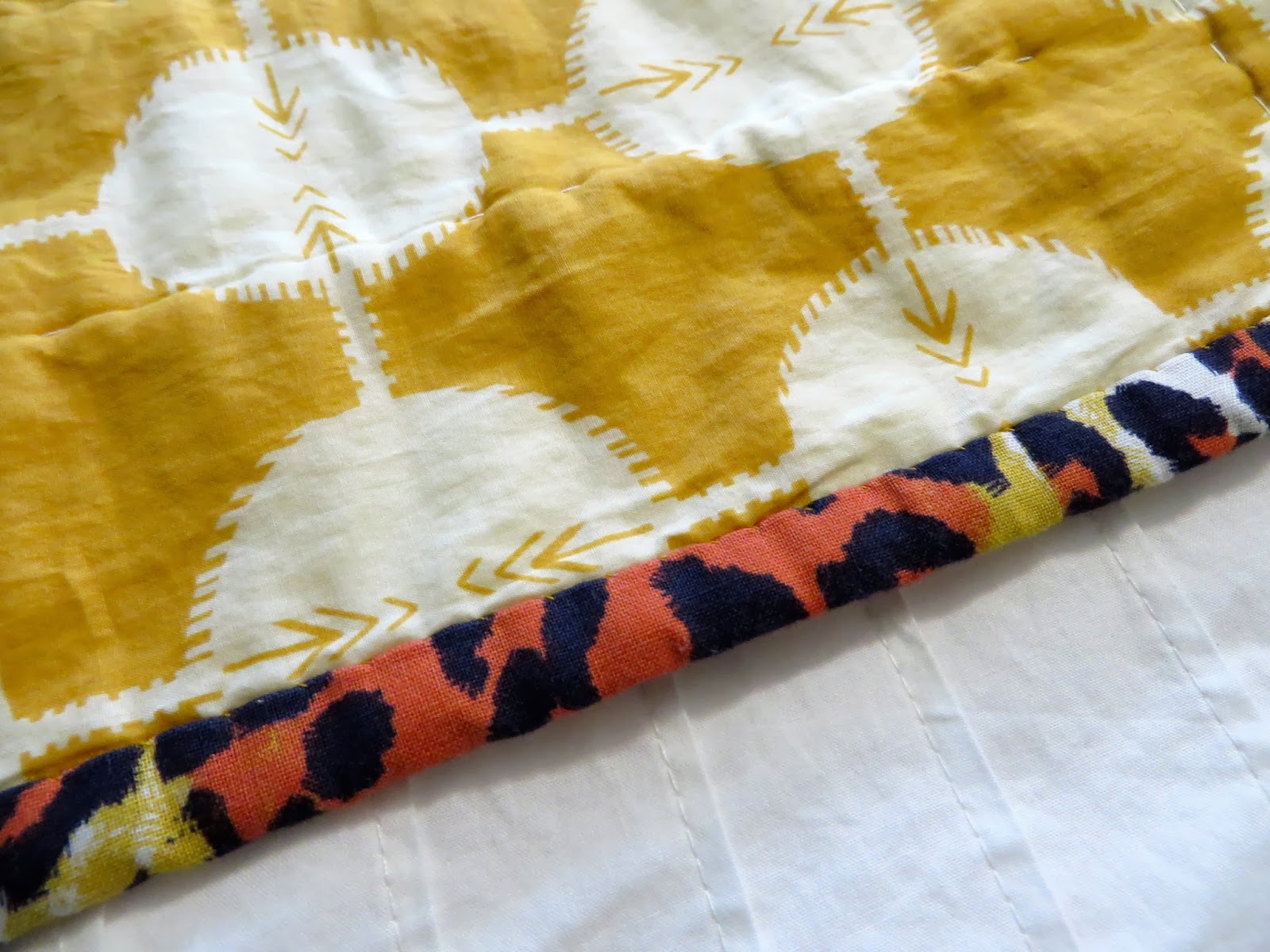 I'm so pleased with this quilt.  I will say though, using the linen/cotton blend as the background of the feathers makes it quite a bit heavier than if I'd used quilting cotton - heavier than I like really, so I'm not sure I'd use it again, although it's a lovely fabric.

And now I'm having fun imagining what my next quilt will be . . .  I actually have another one started, which will be pieced and quilted entirely by hand.  I save that one for when I feel like doing some hand work.  So I think I need another machine-pieced project to have around, and I already have a fat quarter bundle in my stash from which it will be made.  Pink and orange . . . mmmmm!
Posted by Gail at 9:41 AM