A few months ago, when Kim Hargreaves came out with her first fall book, Smoulder, there were two items I felt I had to have.  One was the faux-leopard coat her model wears in a few of the shots.   The other was the Holt coat, knit in Rowan Big Wool.

Big Wool is not one of my favorite yarns to knit with.  I'm used to knitting with fine yarns on small needles, so knitting with this super bulky yarn on massive needles is quite straining to my hands, wrists and elbows.  Thus, I have to be over the moon about something done in this yarn to actually knit it up, and I am about this coat. 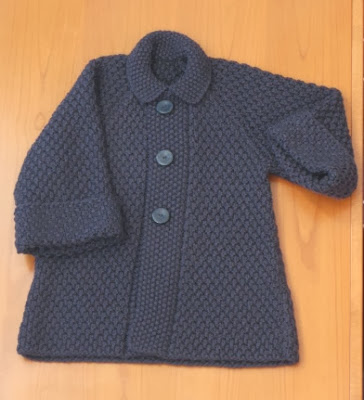 This design is classic Kim:  deep raglans, collar, wide turned-back sleeves, and two different types of moss stitch.  Perfection.  I chose to knit up my coat in the same color as was shown in the book:  Smoky.  It's a super deep, almost black, midnight blue.  The photos of me wearing the coat are closer to the true color than the one above.  Of course, you can't really see any details in those!  So I included  a couple of the photos that were overexposed. 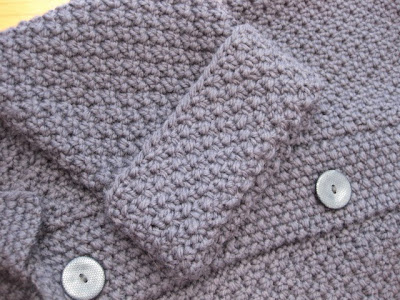 The cuff turn-back is stitched to the sleeve at the sleeve seam to help it stay in place.  I used a long-tail cast-on throughout the sweater, being careful to keep it loose so that the cuff wouldn't pull in on the sleeve in an unattractive way.

I'm not 100% in love with these buttons, and may change them in the future.  They'll do for now though, and they were the best option I was able to find. 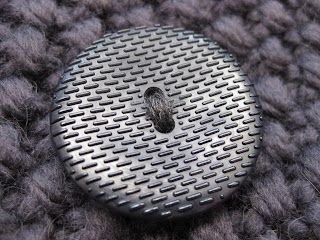 I tend to fall between the first and second sizes on Kim's patterns, so I chose the second size (34" bust) to ensure that my coat wasn't too tight.  Because I knit loosely, I got gauge with a size US11 needle rather than US 13.  Of the 12 balls of Big Wool called for, I only used 10.

It took me a while after finishing the pieces to decide how I wanted to block them.  The instructions recommend pressing with a damp press cloth, but I was leery of flattening the pattern too much with that method.  However, this fabric is so thick that my normal steaming doesn't have much effect.  I finally knit up a swatch and tried both methods to see which I liked better, and went with the damp press cloth, pressing ever so lightly on the body of the pieces and just a little more on the edges where I'd be seaming.  Big Wool is both too bulky and too soft for seaming, so I used some black Cascade 220.

As you can see, these are yet more photos from Monday's big photo shoot!  Against these black pants you can see how dark this blue is.  I think it's lovely. 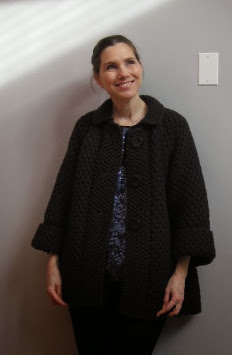 And there are the sequins peeking out!

Here are the overexposed photos: 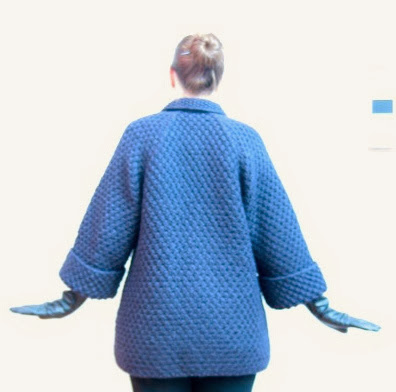 The nice shape at the shoulder is thanks to a faster decrease rate in the raglan there.  Little details like that are one reason why Kim is my favorite knitwear designer.