I wasn't going to board the bra-making bandwagon.  But for the last few months, all the bras I wear around the house on a daily basis (i.e. not the fancy ones, but the sports bras and t-shirt bras) have been feeling more and more uncomfortable, because honestly, they all should have been tossed long ago.

It occurred to me the other day that my leftover scraps of knit fabrics would make mighty fine, comfy bras.  So I downloaded the Ohhh Lulu Jasmine Bra pattern the other day, and today - instead of making the sequin top I'd planned to work on - I made myself a bra. 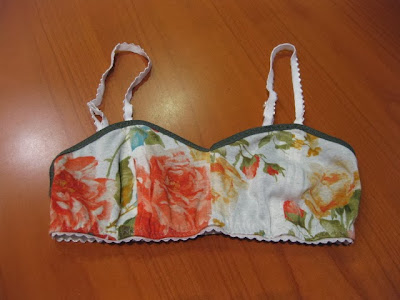 I do believe this is the last project I can squeeze out of that two yards of this linen/cotton jersey I love so much!

I headed over to Vogue this morning to pick up the various elastics required.  I'm not crazy about the elastic I ended up with for the straps; it's softer and stretchier than normal strap elastic, so it doesn't lift "the girls" up very strongly.  But it is super comfy, which is what I was going for.  I used some really soft cotton/lycra jersey as a lining. 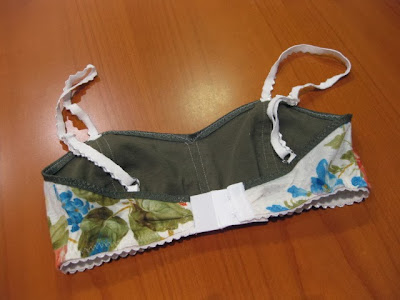 I was able to use the smallest size from the pattern without making any adjustments to the princess seams.  After my first try-on (which happens before you add the elastic at the top and bottom) it seemed like the band was too long, so I lopped off an inch from each side.  That turned out to be too much for me.  I think next time I will add elastic all the way around the bottom and then see how much I need to remove.

I felt like a bit of a dunce while sewing this up.  All the blog posts I've read about this pattern say how it's so easy and a great entry into bra-making.  But I had a few head-scratching moments.  I really felt like the instructions could have been more clear, especially where it came to attaching the straps.  The pattern has very few pictures and no illustrations, and the photos showing how to do the straps are not only very small, but the elastic is black, so you can't really see the details.  I eventually figured it out, but the less thorough instructions meant that I spent about 4 hours on a project that probably should have taken 2.  (In fairness though, I did do 4 loads of laundry concurrently, so I guess some of the time went to that!)  However, it is listed on the shop page as an Intermediate pattern, so I guess t assumes that you know some of these things already.

The pattern also doesn't address the difference between foldover and regular elastic for the top edge.  I used foldover - my first time - and that made my center back edge a little too long for the hook and eye set I'd bought.  So I had to get creative and add in a "decorative" tuck: 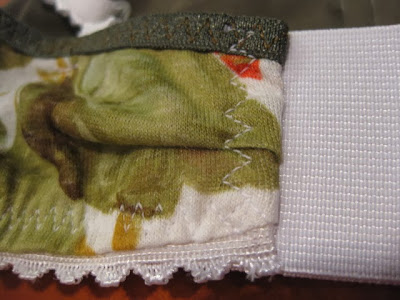 I sewed this bra entirely on my sewing machine, using a mix of stitches and my walking foot.  Rather than baste the outer and lining layers together at the top and bottom edges, I topstitched the seams down with a straight stitch.  It holds the layers together and also gives a little more support to the seams.  It almost feels like very light boning. 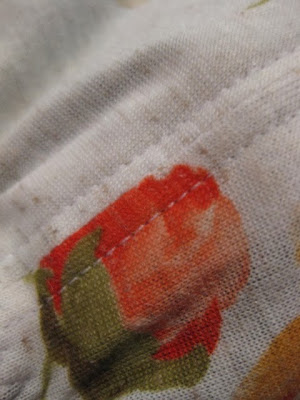 For a lot of the places where I had to sew down the elastic, I used the tricot stitch while stretching the elastic: 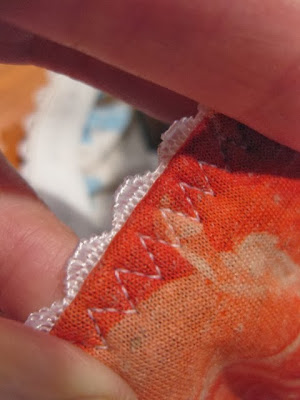 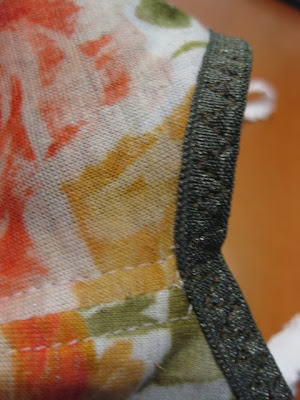 I was able to give myself the extra room at the back again because my hook and eye set had a long piece of elastic attached to the eye side.  I bought two sets of these this morning at Vogue, and when I got home, I discovered that one of them was missing the hook piece!  Grrrr.  I'd hoped to make a couple bras, so I guess I'll have to go back.  I may try JoAnn's instead. 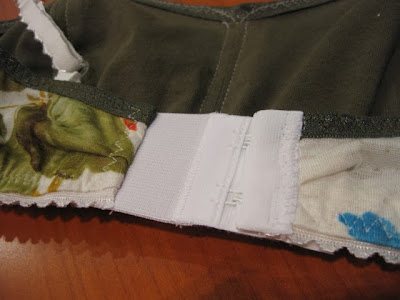 My Janome has a "locking stitch" so I used that at the beginning and end of all the construction seams.  I think it made for a much neater finish than backstitching.

Even though I don't think the directions are as good as they could be, I still think this is a great pattern.  This bra is so comfy on me, and I love that I have another way to use up small scraps of my knit fabric leftovers.  Gotta keep that stuff out of the landfills!  Now that I've done it once, I will be able to make more of these without the head scratching.   And I will be making more - I went though my scrap box and pulled out all the fabrics I thought would work.

The range of sizes isn't large:  there are only four.  The pattern states that it works for B - D cups, but doesn't give any information about how to adjust for the cup except to "adjust the princess seam."  I got lucky:  I made the smallest size (33" - 34") and didn't have to do any cup adjustments, so I'm guessing that the pieces are drafted for a B cup, which is what I normally buy.  The linen/cotton floral jersey I used doesn't have a whole lot of stretch, so I'm interested to see how it will work with a stretchier fabric.

OK, that laundry won't fold itself.  I was just so excited to show you my bra :-) 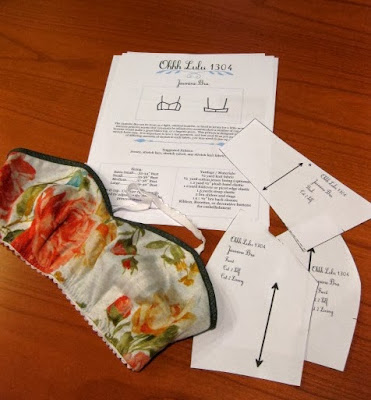 Have any of you tried this pattern?  What did you think?  Am I being overly critical?  I do love the finished product, so it all worked out alright.
Posted by Gail at 5:07 PM