This week, I spent a good portion of my sewing time making gifts which I won't be able to share until they've reached their intended recipients.  But of course I had to moderate all that selfless sewing with a little something for me, so I made up the Zip Organizer from the book Zakka Style.

I first became aware of this wallet when I saw it on Nicole's blog a couple weeks ago.  I was immediately smitten; I'd considered buying the book before just based on the fact that it was put together by Rashida Coleman-Hale, but once I saw Nicole's wallet, I knew I had to have it! 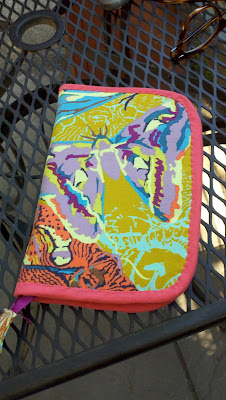 Turns out, Nicole is a better woman than I - she states that this was an easy project and quick to put together.   I on the other hand had SO many difficulties - a full 50% of the seams I created ended up getting ripped out and redone, and I'd say that altogether I probably spent about 10 hours on this project.  Making this wallet really brought home the fact that although garment construction makes intuitive sense to me, the construction of bags and such does not.   Add to that the fact that the instructions in the book are pretty sketchy - I don't think I would have been able to put this together if I hadn't found a good sew-along post for this wallet.  I will say however, many of the posts I dug up regarding this wallet mentioned an errata page for this book - I did check the page and in the copy I bought, all but one error had been corrected. 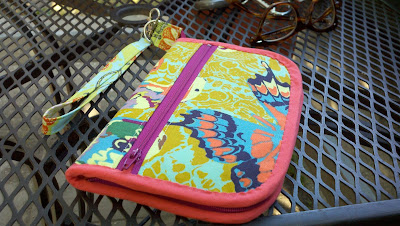 This wallet has a LOT of pieces, and most of them are interfaced, so just cutting them all out takes quite a bit of time.   One thing that confused me was inserting that outside zipper - rather than cutting two pieces for the outside of the wallet, with seam allowances to compensate for the take-up of the zipper seam, the instructions have you cut the outside piece the same size as the inside piece, and then cut it again into two pieces before inserting the zipper.  That works well if you know to allow some room at either side of the zipper teeth - I however am used to sewing a zipper as close to the teeth as I can get.  When I did this, my outside piece ended up being a half inch shorter than the inside pieces - that's pretty substantial. 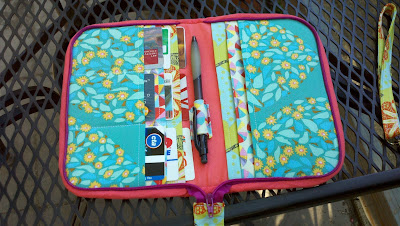 I will say though that now I've done it once,  it would be a lot easier for me to do it again.   But I don't think I will - although I think it's really beautiful and I'm pretty proud of the finished product, it wasn't until I moved my stuff in that I realized that this isn't a particularly practical wallet/bag for me.  Part of the reason I've been making so many bags is that I'm on a mission to find a small but organized carrier for just my essentials.  As much as I love my big Frye hobo bag, it's quite heavy and much larger than I need on a daily basis.  But this one, being flat, has no place for two of my essential items:  a pocket pack of tissues and a lip balm.  However, my phone does fit in the outside pocket, so that's a good thing.

As I was thinking this could be a daily carry-all, I added a D-ring to the zipper tab, and then created a wrist band with a swivel clasp - I am happy with that feature and will probably be incorporating it in more bags in the future. 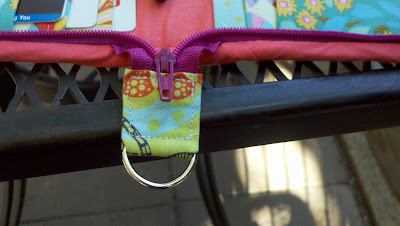 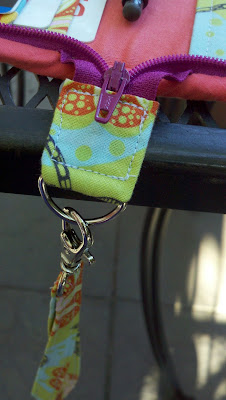 Materials-wise, I used fabrics left over from my Feather Bed Quilt - these are all from the "Patina" colorway of Anna Maria Horner's Field Study line.  It's very busy on the inside, but I like seeing little bits of all the different fabrics.  For the outside panel, I interfaced with Pellon Craft-Fuse (808) and for all the other pieces I used Pellon Shape Flex (101).  The binding is leftover cotton lawn from my maxi skirt.  It's a LOT of layers, all of which have been basted together many times.  I tried to baste at 1/8" but wasn't always successful, so before applying the binding I ended up trimming the edge all the way around by about 1/8" so that my basting wouldn't show.

Because of all my problems, I was "angry" with this bag much of the time I was working on it, but once I finished I was pleased with the result.  I took it on my coffee date with Alicia the next morning and she admired it as well.  I really love the beautiful butterfly fabric on the outside.  So although it was kind of an ordeal, I'm glad I made this wallet.  And now I'm ready to move on! 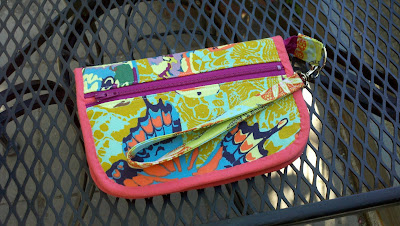