It's hot and humid today, and I have no business wearing a long-sleeved shirt, jeans and flats.  But I really wanted to try out my new shirt!

I'll be honest - after I finished it, I was a little deflated.  The fit is OK, but just OK:  not the hit-the-nail-on-the-head straight out of the box perfect fit I was hoping for.  (Yes, I know that's a pipe dream.  Partly because I haven't really even decided yet what my perfect fit is.)  It looks good enough on, but it's not awesomely flattering.

But then I wore this outfit to go do my grocery shopping.  I didn't feel at all constricted in the back and upper arms while driving or reaching for things on top shelves.  And this fabric is so luxuriously soft and silky.  The more I wore the shirt, the more I liked it!

And then the deli guy said  (unsolicited), "Nice shirt!"  And when I told him I'd made it, he was super-impressed - in fact both deli guys were impressed enough to start sounding me out to see if I'd make them some shirts!   So that was a very nice pat on the back!

So, I think I'm liking the Archer.  But there will have to be some adjustments made.  For instance: 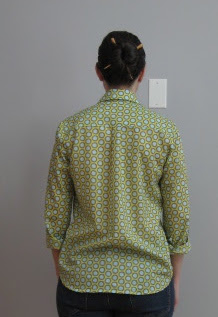 I certainly need to do the swayback adjustment.  (I actually need to do that on the Pattern Runway blouse too, on my next version.)   And I'm not digging those diagonal lines that radiate from the tops of my shoulder blades to my underarm - I have NO idea what kind of adjustment that requires and will have to research it, so if any of you have any tips or insights, please share! 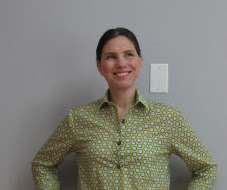 And this really surprised me:  despite a whopping 7" positive ease in the bust, I get gap-osis when I put my hands on my hips (a fairly common stance for me).  So I'll have to reposition the buttonholes next time.

Also, in the first two photos you can see diagonal drag lines extending from my shoulder points to my bust apex, so I'll have to figure out how to deal with that.

Still, it fits and feels better than any RTW shirts I've tried lately.  It's perfectly acceptable as is, and a layperson wouldn't notice any of these fit issues.  But I know that with some effort, I can make it better.  So while I ended up liking it, I probably won't be making another until I can figure a couple of these things out.  Or maybe I will, because I have a paisley voile I've been dying to make a relaxed-fit shirt from. 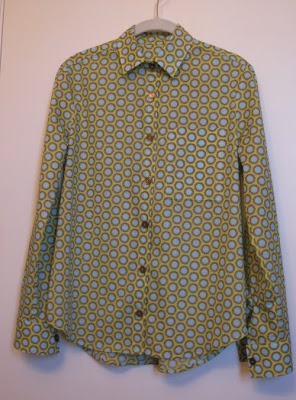 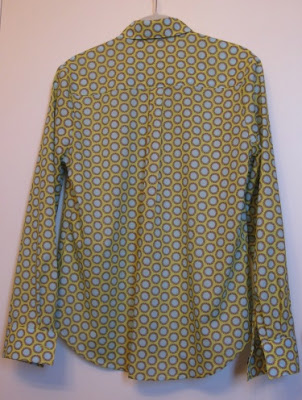 I neatened up my hem by trimming the back, but I ended up keeping the length as is - I didn't remove any more.  Length-wise, this shirt is the same as the Pattern Runway blouse.  Although I made the View A shirt, I used the View B cuff - I just felt it went better with this fabric. 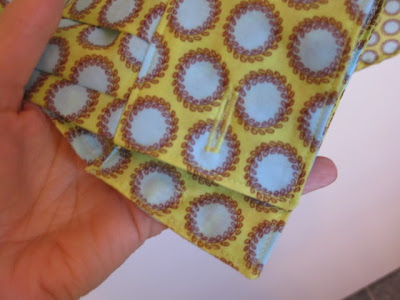 The deli guy especially liked my buttons, and I do too: 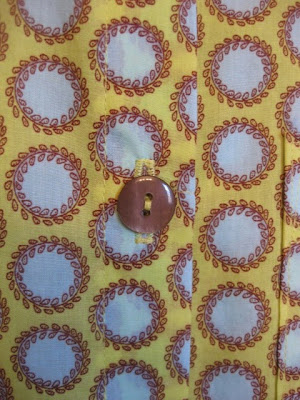 They're just cheap plastic shirt buttons, but I like this shade of brown and the fact that they're a little bit pearly.

I have a little bit more to say about the construction of the collar, but I'm going to do that in a separate post.  This is getting long, even fore me!