When I first posted about my coat project, I said I intended to make this my main project for February and indeed, I have been working on it consistently since the beginning of the month.  Never having made a coat before, it seemed like a big project to me, so I decided from the outset to break it down into small chunks.  I've even been keeping a little journal of all the work I've done on it.  And you know what?  It's really not very difficult - it's just that there are a lot of steps.

The first thing I did - very uncharacteristically - was to read through the instructions.  And I have to say, I think the instructions for this Burda pattern are pretty clear.  I'm glad I took the time to read them:  it was a real confidence-booster.

Last week I officially got started:  I traced out all my pattern pieces, then cut out my outer fabric on another day.  (I decided to cut the lining when I get to that point, since I'm running out of places to keep cut-out pattern pieces!)  I even got myself a set of fancy new pattern weights for the event: 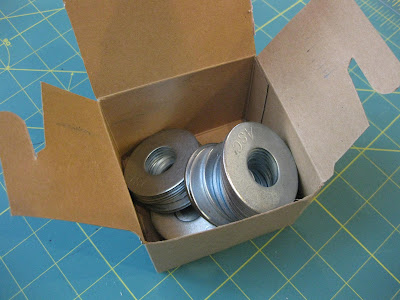 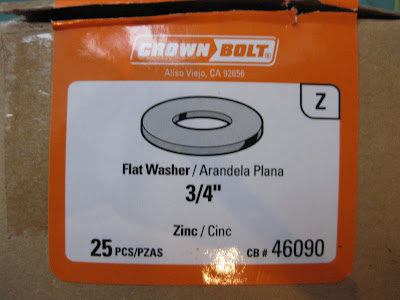 Nine bucks at the hardware store!  And I love them better than my expensive shot-filled pattern weights from JoAnn's!

I also recently bought Sunni's whole pattern tracing system:  medical exam paper, double tracing wheel and wax tracing paper.  Up to this point, I've made all my patterns on Swedish Tracing Paper, but it gets expensive, especially for patterns I don't foresee making more than once or twice.  The initial outlay for these materials was significant, but they'll last much longer than a roll of STP.  It sure felt different though - it's going to take some getting used to! 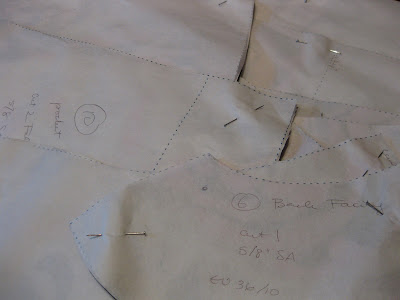 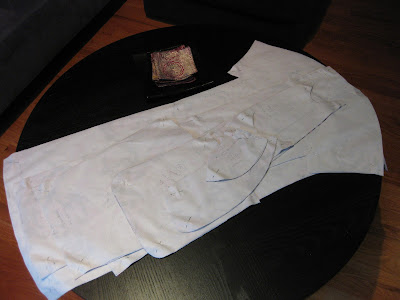 On the same day, I tested out my favorite marking tool, Dritz Mark B Gone.  The ink from this tracing paper is supposed to fade within 48 hours, and it always has for me.  But I wanted to make double sure in this case.  The marks did fade, but I ended up using water soluble pencils instead because my tracing wheel left perforations in the fabric that I found difficult to remove. 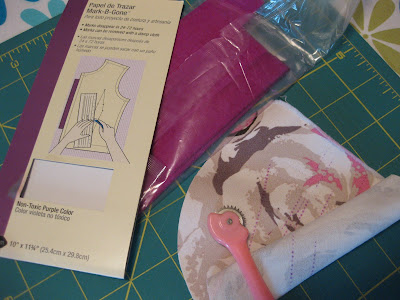 By the way, that tracing wheel is one I stole from my mom's sewing basket years ago - sorry, Mom!  I love it though because it was hers, and also it's pink and says "Queen" on the side!

On Saturday I really only meant to make my markings and apply the interfacing.  But it ended up being a sunny day, so I decided to take advantage of the light and start sewing.  I got a lot further than I'd thought I would.  It's really starting to look coat-like!

Since the coat is fully lined, I don't have to spend time finishing any seams!

I didn't set up my cutting layout to arrange the pattern in any way.  Since the darker roses form a rather linear pattern, I wanted to keep everything random in order to break the lines up.  The patch pockets and collar will help break it up more too.


I'm really pleased with how it's coming along.  I've tried it on at this point and the fit seems good.  I'll admit I was a teensy bit nervous about that even though I did measure the flat pattern, and it's a generous shape.

I'm also happy I chose to start with this pattern.  I think it's a great first coat.  I'm still kind of mystified by things not addressed in this project, like interlining and pad-stitching, but I'll cross those bridges when I get to them with my winter coat next fall!
Posted by Gail at 7:00 AM