Throw the dog a bone.

Remember my wacky, fleecy orange hat?  I was wearing it a lot last week because it was so cold.  One morning, Hubby said to me,

"How come you never made me one of those hats?"

"I didn't know you wanted one," I answered.

"Well, I do.  When I put up the hood on my coat, I don't have any peripheral vision.  If I had a hat like that, I could have warm ears AND be able to see on both sides!"

Well, I'm always happy to make something for my boy.  We had a short conversation about color choice:  charcoal grey won out;  I was unable to sell him on a magenta/chartreuse combination.  (Really, that was more of a vocabulary test.  You have no idea how long it took me to teach him the difference between "taupe" and "teal."  Pffffft.  Boys.)

The next day I went to my LYS . . . and they didn't have the yarn I wanted.  They seem to be changing their inventory; sadly they have even less of what I like these days.  So I had to make an internet order.  I got 2 skeins of Brown Sheep Lamb's Pride Bulky in Charcoal and two ounces of merino top in Pewter.  My yarn arrived on Saturday and I got started right away on the hat.

The first thing you do is cut your sliver into 2" lengths, and then separate these into bits which, when twisted, are about the same thickness as your yarn.  I cut mine with my rotary cutter and quilter's ruler.  I like to prepare a small bowl full at a time. 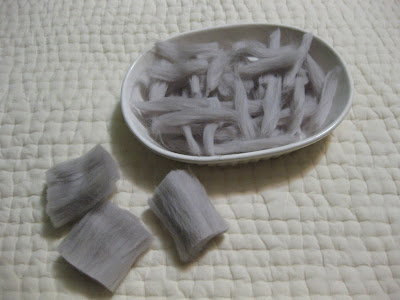 The hat is worked in garter stitch, and the fleece bits are worked into every other stitch.  I tried to get some pictures, but I'm afraid it may not be very clear - the pictures that come with the pattern are much better.  Just before you work a stitch, you fold one of the bits around your yarn: 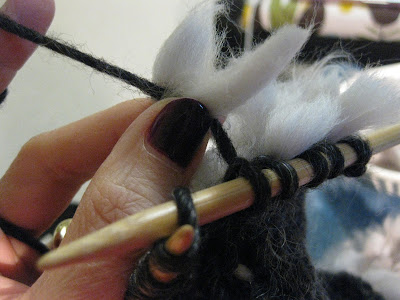 Then continue working the stitch, so that bit of fleece is caught in the horizontal bar on the back of the garter stitch. 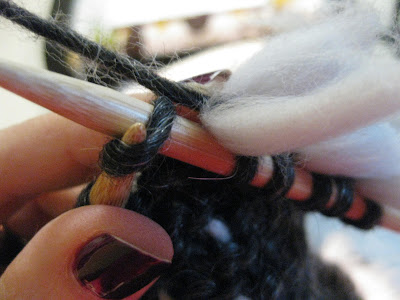 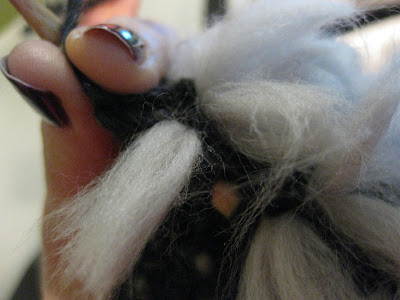 It's really a lot easier than it looks and sounds!  Here's a picture of the fabric from the side:  you can see that there's a ground of garter stitch knitting, with fleece coming off one side: 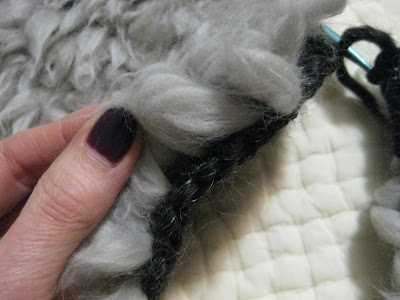 The hat is constructed by working the earflaps and visor flat, then connecting everything and finishing in the round. 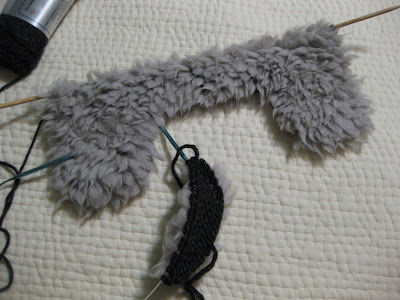 The fleece is lightly felted by tapping up and down on it with a hairbrush;  I like to felt it a little bit as I work, because I knit loosely and before felting, the fleece bits can get pulled out.  The hat is only fleeced part way up the inside - I'm not really sure why!  In the end, I really only used a very little bit of my second skein of yarn, and only about two thirds of my merino.  I did make the hat a little deeper than called for:  Hubby has a big head.  It's where he keeps all his knowledge. 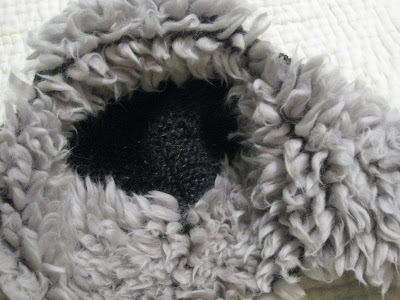 Here's the finished hat, modeled by my good friend Lamp: 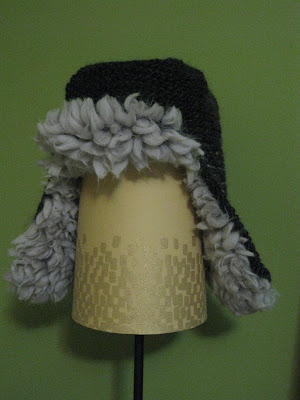 When Hubby told me he wanted the hat, he said, "But I don't want to look like a bunny!"  So I left off the ties and pompoms.  He wore it today because it's very cold again after a few warmer days, and now he's wishing he had a way to close it under his chin.  So I think tonight I'll be sewing some large snaps at the bottom.

I had so much fun making this pattern again!

**DISCLAIMER:  This is a piece of humorous writing!  I don't want you guys to get the idea that Hubby is a doofus, because he's anything but!  (The guy has almost as many initials tacked on to his name as there are letters in the alphabet!)  But you know how it is . . . sometimes it's just fun to tease the boys ;-)  Oh, who am I kidding?  I tease everybody!
Posted by Gail at 9:54 AM