It's hard for me to believe that it's been a month since I made my first Dotty top.  I pondered the fit for a few days, and then made Dotty #2 the following weekend. And it's been hanging on my dresser ever since.

Part of the reason I haven't been posting as much here is that I rarely feel like doing the whole "photo shoot" thing any more.  So much effort!  This top has been hanging there waiting for me to get in the mood, but it just hasn't happened.  But there are some things I want to say about it, so I've decided just to forge ahead with pictures of it on a hanger instead of on me. 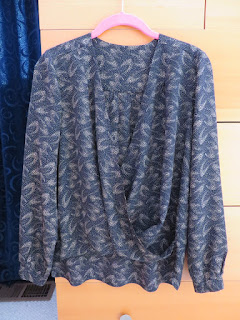 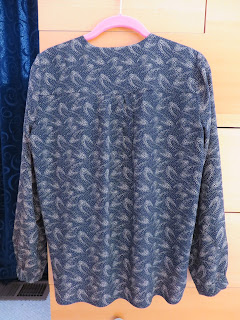 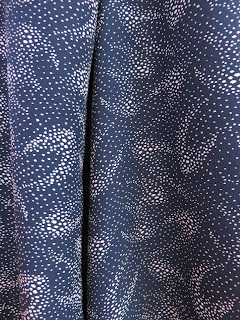 In my first post about this pattern, I made a list of adjustments I'd planned to do. But in the end, the only one of those I ended up doing was to shorten the sleeves! As I took a good look at how the top fit me, I realized that the armhole was way too deep and that the torso was also too long.  Shortening in these two places meant that I could avoid grading out at the hip and doing a sway back adjustment. Here is how it looked after I pinned out these adjustments - it no longer looked like it was swallowing me! 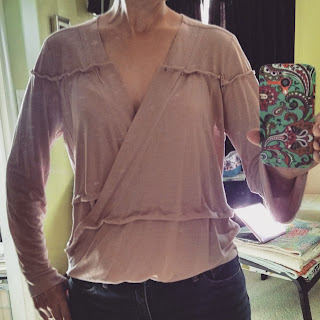 Taking a tuck out horizontally across the front and back to shorten the armhole meant that I also had to tuck out the same amount on the sleeve cap.  Normally, I would just tuck out this amount and smooth out the edge.  But this time I decided to try the method recommended in Fitting and Pattern Alteration, and I really liked how this works.  I mentioned this book in my last post; it recommends making changes at the seam line rather than the cutting edge, so that the seam lines remain unchanged and everything matches up like it's supposed to when sewing.

So for this adjustment, I sliced across the sleeve cap at the place where it would match with the tuck I took from the front and back.  Then I cut 2 slits vertically, each a bit away from the the apex of the cap, with small clips into the seam allowance to create hinges.  I placed one side of the seam line the specified amount (I removed 1/2") down on the seam, then swung out the other to the opposite side.  The cap seam line remains smooth and consistent in length when done this way.  It's much easier to see what I mean in pictures: 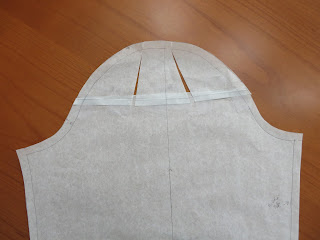 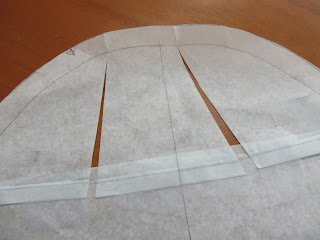 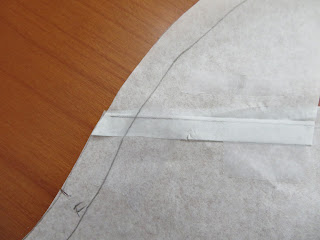 I love it that Style Arc patterns have the seam allowances marked.  It really makes this type of adjustment so much easier.

Here are the adjustments I ended up doing:

Very different from my original assessment!

I also made some pattern changes.  I increased most of the seam allowances to 5/8".  I did this to make the gathering easier, and also because I'd decided to use French seams on my silk crepe de chine.  But I did keep some of the smaller seam allowances, so I made myself a key - the different allowances are color coded: 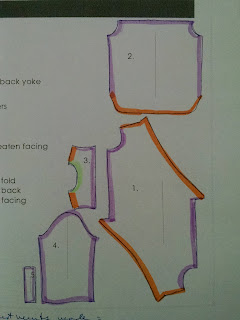 If you look at that front piece, you'll see that the neck edge has a cut-on facing that is curved.  For the life of me, I couldn't figure out how to make that turn back on a fabric with no stretch.  So I cut off that section, added some seam allowances, and sewed the facing on separately.  Next time though, I think I'll skip the facing completely - I don't really think the top needs it.  I'll just use a narrow hem at that edge.

I wore this top to a concert the other night and felt quite stylish.  I snapped this picture for Instagram, but later added a few long necklaces which looked even better: 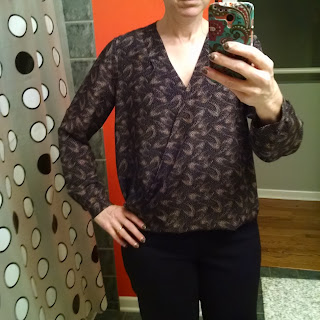 I'm happy with my fit changes, and can see myself making this top at least once more.  I might even make it in a solid color!
Posted by Gail at 7:00 AM