My latest knit has been finished since last Sunday, but my week didn't go as planned so I'm just now getting around to posting it.  In addition to lots of work and appointments on my schedule, I also managed to get a cold and a sports injury that put me out of commission for several days!  I'm mended enough now though that I wore my sweater today to have lunch with Hubby.  Of course, I forgot to bring along my camera, so here's one he took with his phone. 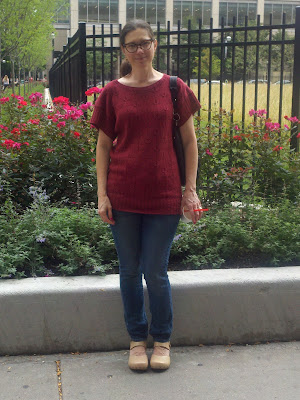 (My tummy looked somewhat flatter pre-lunch, hehehe!  It was delicious.  Many a crab rangoon was consumed.)

This pattern is Auden by Bristol Ivy.   It's one of a couple of sweaters I meant to make last fall and didn't get to.  The original was made in wool, but I had this Brown Sheep Cotton Fine in my stash that I've been wanting to use up.  Some of you may remember it as the same yarn from my failed Saffron sweater.  This was my fourth try at making a sweater from this yarn.  I was a little afraid it was jinxed, but it worked out quite well. 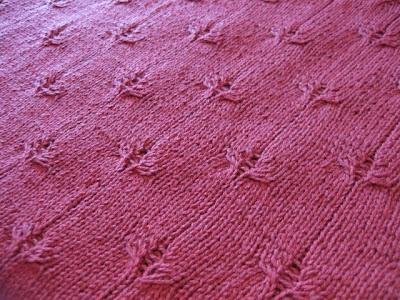 Being 80% cotton and 20% wool, the fabric is different than that of the original, although the gauge is the same.  It means that my sweater has more drape than the original, which in turn means that my sweater is tunic-length rather than hip length, and I'm OK with that.  The drape works in my favor at the sleeves, which are picked up and knit on kimono-style after the shoulder seams are sewn (or rather, finished with three-needle bind off).  One of the biggest problems people have mentioned in the comments on this sweater is that the sleeves end up looking line-backerish in the sturdier wool.  Even with my drapey fabric, they make my already wide-ish shoulders look even wider. 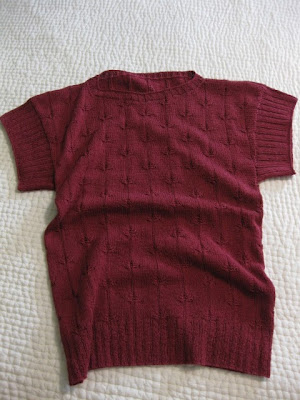 I find this yarn a little tedious to work with - the high cotton percentage means it has very little give, so it can get hard on the hands.  But the pattern itself was a delight - so well written, as Brooklyn Tweed patterns tend to be.  The fern stitch is easily memorized and fun to work, but you get 6 rows of respite too between them, which makes this pretty good TV knitting in my view.   One place where I ought to have turned off the TV though was for working the bind-off at the sleeve edges.  I ended up picking them out out and doing it over.  Look at the difference between "TV cast-off" and "paying attention cast-off": 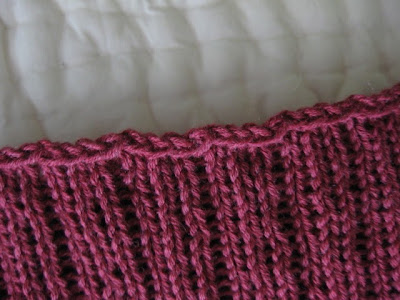 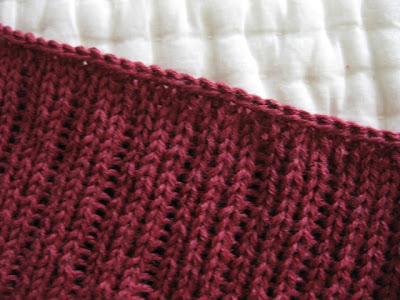 SO much neater - I'm glad I made the decision to redo.

One thing I really appreciated about this pattern is that the designer took the time to make sure all the rib sections line up with the stitch counts in the neckband, which is picked up and knit once the shoulders are seamed.  I actually expected to have to readjust the numbers to get a neat outcome, because I so often do - but with this pattern it was already done! 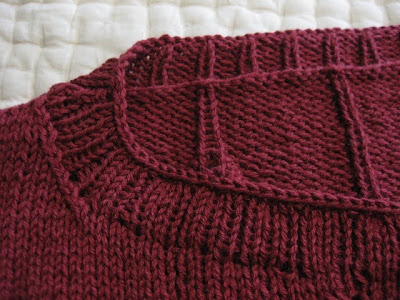 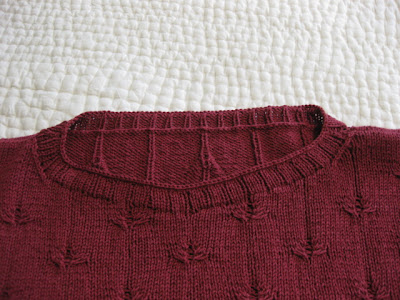 I've already got 2 more sweaters and a hat on the needles.  The hat is my "coffee date knitting" and one of the sweaters is the other sweater I meant to make last fall.  Better late than never - I've gotten quite far with it and I'm loving how it's coming along.

My illness and injury meant that I wasn't really able to do any sewing this week.  Luckily, I managed to finish up Victoria Blazer #2 before I got sick, so I'm hoping to get some time to post that one in the next couple days.  But even though it's still quite warm here, my brain knows that autumn is almost here, so all I want to do is knit!
Posted by Gail at 5:00 PM