Hello, hello!  I wonder if anybody guessed that I've been gone for the last two weeks?

The last five blog posts were scheduled before I left :-)  I'd planned to continue replying to comments and commenting on your blogs as well while I was gone, but I discovered that it's not that easy with just a phone and an iPad!  I'm also starting to feel that Bloglovin' is a hindrance in some ways, but that's a story for another day . . .  At least I was able to keep up with reading your posts and your comments here - thank you for all the lovely comments you left!  I was especially fascinated by all the different approaches to list-making.

Anyway, Hubby had a conference to attend in San Francisco, and since we have a fair number of friends and family in that area and we hadn't been there for ten years, I decided to tag along.  And this time,  instead of staying in bed with a sinus infection like I did ten years ago, I went out and about while he was busy with his meeting.

Before I left, I organized meet-ups with three bloggers who I've "known" and followed for a long time - I'll be telling you all about those adventures in the next few days.  I did consider making an "announcement" a month or so ago with an invitation to meet up, because I know there are at least a few other bloggers in San Francisco who I follow.  But as I said, we have quite a bit of family and old friends that we also wanted to see - there just wasn't time for everything!  While we were there, Amy at Sew Well announced a meetup at Britex for the following week.  I was bummed to have to miss it, especially as our hotel was only a couple of blocks from there.  But we'd had that evening set aside to see an old and dear friend, so I had to let it go.  I'm hoping it won't be another ten years before we make it out there again!

We were blessed with nice, if cool, weather on our trip, so we mostly got ourselves around by walking.  I always prefer to walk if I can, so I brought along my trusty old Dansko Margrete shoes.  These things are at least ten years old, and have been all over the US, Europe and Turkey. 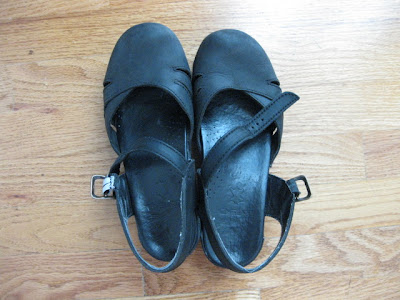 These have always been one of my most comfortable pairs of shoes for walking, but about half way through the trip I started noticing that they weren't so comfy any more.  But I just figured, "Hey, I'm getting older, I can't take all this walking as easily as I used to."

I also noticed some black pieces of rubber on the floor in the hotel room on a few different occasions.  And I thought, "Hmmmm, I must have dragged something in off the street."

On Sunday morning, as we were taking all our stuff to the lobby of the hotel to start heading toward the airport, I started feeling really wobbly, and thought, "What is going on here?!"   I finally checked the soles of my shoes and this is what I found: 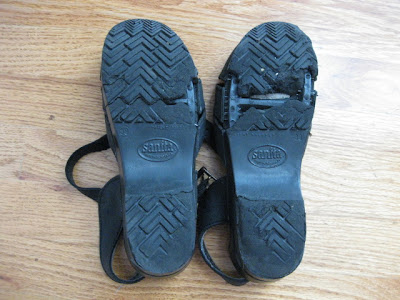 They were completely disintegrating!  How hilarious is that?!  And no wonder I kept feeling like my feet were rolling to the outside! 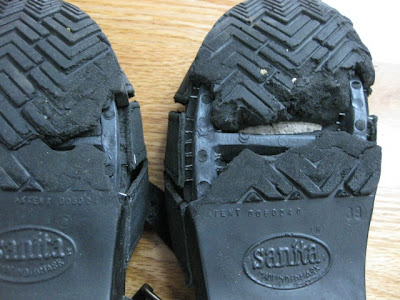 It's the end of an era.  These shoes have stood me in good stead for many, many years.  If you look at the first photo, you can see that I had to replace the elastic on the left shoe a long time ago, and I only had white on hand.  I think it's finally time to retire this pair.  Fortunately, I'd bought a new pair of Danskos just before we left; I guess it's time to start breaking those in!

And time to get back to life as usual!
Posted by Gail at 8:01 AM