Buckle your seatbelts, kids. This is going to be a long one! If you're not into the minutiae of sewing, you might want to skip this post entirely! Once again, I'm mostly writing this for myself as an aid to memory, but I'm also hoping the content might prove useful to some folks. And there will be a little request for help at the end :-)

I wrote a month ago that I'm joining in Karen's Sewlutions, and like several others, my goal is to make well-fitting shirts for my Hubby.  And although I haven't mentioned it since, I've been slowly working away at developing a pattern that fits him just the way he wants.

Just in case this may be useful to someone, here are the challenges I face when buying (and now, making) shirts for my boy:

So, he's shaped like an inverted triangle.  My original thought was that I could just get a pattern with a slimmer fit and make the neck/shoulder size to fit him and maybe taper in the sides below the armhole if necessary.  I also knew that I wanted:

* a collar with separate stand
* a one-piece sleeve with placket
* a yoke, preferably with shoulder pleats
* curved hemline

After looking around at the few patterns available, I decided to try out Burda 7767.  It didn't have everything I wanted, but it had most of it.  I ended up adding 1" at the center back to add in the shoulder pleats (which are not included on the pattern) and changing the straight hemline to a curved one.

Before I chose which size to trace, I took some measurements from a shirt he has with a nicely fitting collar, as suggested by David Coffin in his Shirtmaking book.  While the envelope would have had me choose a size 40 because it's based on the chest measurement under the arms, going by the collar stand and yoke measurements on his existing shirt lead me to trace a 42.  I got myself some gingham fabric and made up Muslin #1: 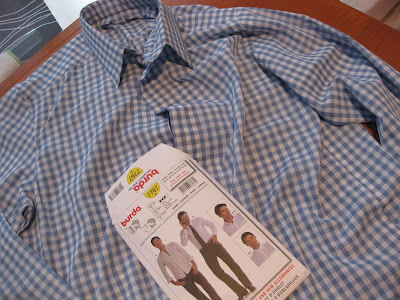 Results were mixed.  The good news was that the collar and yoke fit really well.  The body was a little wider than I'd originally wanted, but I later decided I didn't want to create too close a fit.  But the armholes - OY!  Horrible!  The armscyes on this pattern were so small that the armhole was kind of jammed up under his arm - uncomfortable to wear, and unflattering too!

This kind of stopped me in my tracks for a while.  I wasn't quite sure how to fix it.  Luckily, Hubby is really into the idea of having custom-fit shirts, so we both spent some time analyzing what it is we like and dislike about the shirts he has.  We settled on one that we both thought had a pretty good fit, and then I did a complete rub-off of it.

Once I'd essentially made a new pattern from the existing shirt, I compared it to the Burda pattern pieces.  Interestingly, the collar, collar stand and yoke were almost exactly the same.  But the sleeves on the RTW shirt were much wider at the cap, the cap shallower, and the armscye much deeper.  I'd originally thought that I could simply trace the armscye and sleeve cap from the RTW shirt onto the Burda pattern, but the differences were just too great.

Now I was really scratching my head!  Finally, I decided to assemble and compare all the information I had.  I got out the traced RTW pattern, the Burda pattern, McCall's 6044 (which I made him last year) and Simplicity 2741, purchased a few days before for the sake of comparison.  I folded back the seam allowances on the shoulders and yoke and taped them all together so I could see the shapes and sizes of the armholes as if the shirt had been sewn together.  I also compared the flat pattern pieces.

After literally 2 hours of comparing and measuring, I decided that the armscye of the McCall's pattern would be the best one to transfer to the Burda pattern, because the shoulder points and side seams matched up.  I ended up scooping out the front and back armscyes to about 3/4" down the side seam.


Then I had to figure out which sleeve cap to use.  My original thought was that the McCall's sleeve should be used with the McCall's armscye.  However, I wasn't too crazy about the design of that sleeve:  not only is it a two-piece sleeve, but the fit is very slim.  I wanted a looser fitting sleeve so that Hubby wouldn't feel restricted while typing on the computer at work.  Finally, I got out a flexible ruler and measured the armscye and the caps of the various sleeves.  And here's the really interesting bit:  the Burda sleeve cap fit perfectly into my new armscye!

At that point, I unpicked one sleeve of my muslin, transferred all my changes to the fabric and sewed it back up.  And the fit was almost there.  There was some excess fabric pooling at the back of the armhole, so I scooped out an extra quarter inch along that edge.  Finally, I was getting somewhere!  (I'm sorry I don't have pictures of all these fitting challenges - he's not that into the process!)


Last weekend I was able to begin my second muslin.  This time I decided to try out some new techniques.  I played around with learning to use my new felling foot and the rolled hem foot, and took notes once I'd found a good stitch length: 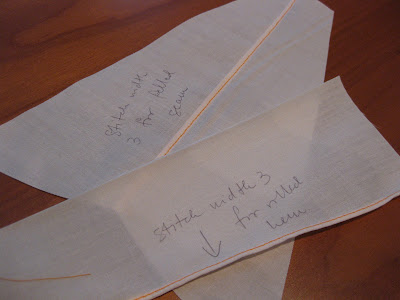 I played around with the stitch length for the buttonholes til I found one I liked: 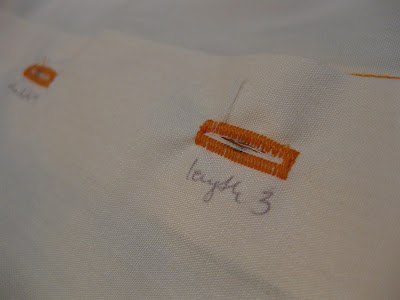 I tried out David Coffin's cuff and collar construction, as well as his placket pattern: 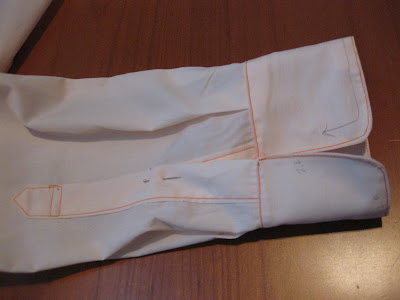 I really liked the method for the cuffs, but I think when I do the final shirt, I'll use my old collar method.  Doing it Coffin's way seemed to change the fit of the collar slightly for the worse.

When I made the collar, I added in stay channels, and I also tried out the "Pam's Perfect Points" tutorial for turning out the collar.  I have to admit, it didn't really work for me. 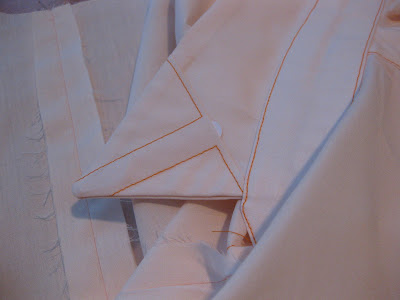 
I feel I still have a fair amount of research I want to do on construction, but at least I finally have a pattern I can work with.  When I asked Hubby to try on Muslin #2 today, he was disappointed that it wasn't a "real" shirt.  "You mean I can't wear it?"  he asked.  "You can wear it," I said.  "But you'll look like a fool - it has writing all over it!"  "I don't care!"  he said.  So sweet! 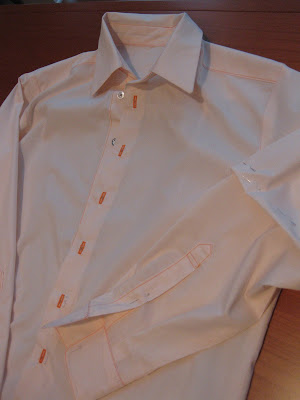 One thing I'm not so sure about - and here's the request for help - is what kind of interfacing to use for the collar stand, collar and cuffs.  I've so far tried lightweight non-woven fusible (too flimsy) and Pellon Shape Flex, which was OK, but still not as stiff as I'd like.  I'm wondering if there's something better?  Has anybody made it to the end of this post?  Do you make shirts?  What do you use?
Posted by Gail at 5:15 PM