The Case for Blocking

I'm about half way done with my second Kalajoki sock, and I though this would be a good time to show the difference between my first sock, which I've washed already, and the one in progress.  I think the photo below really demonstrates how much blocking can "fix" tension issues: 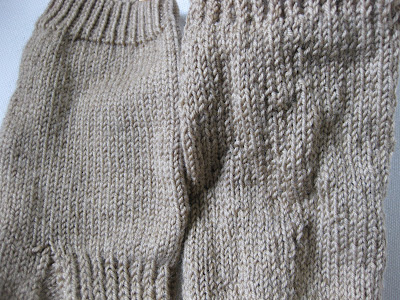 The first sock looked almost as bad before I washed it, although the second one is worse because I'm using yarn that had been knit and then frogged.  The finished sock has been through the washer and dryer once.

Most of the time, when I show knits in progress on this blog, they've been steam blocked before I photograph them.  I do this partly because I think knits photograph better when blocked, but also because it helps me see how the finished fabric will look.  So don't get the idea that I knit with perfect tension all the time!
Posted by Gail at 1:25 PM